WE ARE STILL HAVING HOT WEATHER ALONG THE TRINITY 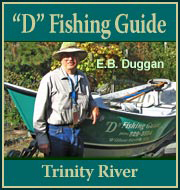 It appears that the “Dog Days of Summer” are still with us. They started early and have come back again. I do not know what to say but it seems as though we are experiencing a change in the weather. We usually have a week or two of HOT (In the 100’s) weather around the middle of July and then it cools down. This year it is definitely different then I remember when we could depend on good salmon fishing by the first week of September.

This hot weather has really caused the fish to hold up in the cool deeper water. I have talked to several fishing guides and they all say the same thing “the fish are off the bite” even though they are seeing fish. This along with the small estimated salmon return is defiantly NOT helping the fishing. It is happening on the Sacramento as well as the Eel and the Trinity. I hope I will have much better news by mid-September because the low water comes in October. Lets all pray for rain by mid-October and not mid-November.

I have noticed that there is plenty of people traveling the highways with RV’s. With the COVID-19 restrictions people are getting tired of staying at home cooped up, they want to get out and do something, it looks like camping is the only way to be safe. Several of the campgrounds I have passed are full. This is great but the US Forest seems to disagree as they want to close camp grounds. E NE Nuck is one of the camp grounds that is really used during fishing season but the Forest Service has yet (after3 years) to get water back to the grounds and they are having trouble getting water into several other camp grounds also. Closing camp grounds is not the way to get people back out into the forest. This needs to stop! Maybe the Forest Service should start training more people to take care of the water systems!

As of to date I have still no word of when the reservations will open for non-residents to go off main streets and into river accesses. I have been asked many times if I have heard if there is any word yet about the Yurok and Hoopa Reservations relaxing their COVID-19 “stay in shelter” ruling.

Fishing: Trying to fishing during these hot days is very hard. When experienced fishing guides are having trouble finding fish for their customers you know it is tuff fishing. The best thing for anyone who wants to go fishing now is to fish the deep holes in the early morning when the water is the coolest. You also might want to scout out the area and look for cold water streams that are coming into the main stem of the river. Over the years when it is hot, I have found it best to find the coldest stream close to a deep hole to fish. That is where I have found the best fishing on hot days.

Mid-Klamath to Happy Camp: The Klamath River at Weitchpec is flowing @ 2,333cfs. This is a decrease of 567cfs from the last week. Iron Gate Dam is releasing 886cfs as of this morning. Fishing will be hard because of the high temperatures, warm water and now the algae is forming.  With this heat it will be mostly an early morning fishing. Because I have not heard what is happening above I-5 this week I would expect the heat and low water would make fishing some what difficult. I would expect the same conditions are in the Happy Camp area at the present time.

Trinity Lake: The lake is 57ft below the overflow (an increase of 5ft) and 66% of capacity (a decrease of 3%) with  inflows of -158cfs and releasing 2,139cfs into Lewiston Lake with 1,739cfs being diverted to Whiskeytown Lake and on to Keswick Power Plant, which is releasing 11,111cfs into the Sacramento River.

Water flows at the mouth of the Trinity River at the Klamath in Weitchpec are estimated to be 1,766cfs a decrease 567cfs.

Temperatures in the Valley last week had a high of 98 and a low of 55 degrees. Rain for the week was 0.00in with a water year to date of 42.47 inches, with snow in Willow Creek of 1.45in. Forecasts for next week are for several days of triple digits with highs of 104 and lows of 61. The temperatures for next week are expected to reach into triple digits for the weekend and then cooling down into the hi 90s. With high temperatures of 100 or above be sure you stay well hydrated and be sure to have lots sun screen with cold water.