Pacific Halibut Flying Over The Rails 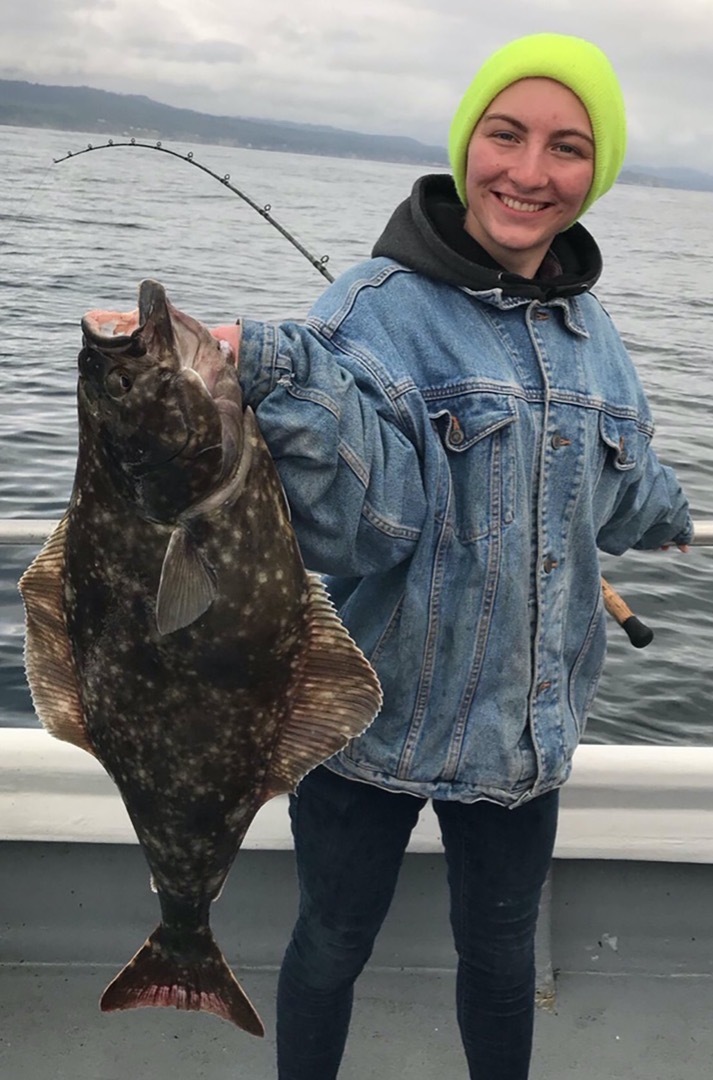 Rosemary Kelly landed a nice Pacific halibut on a recent trip out of Trinidad. The halibut bite off the North Coast has been red-hot the past two weeks.
Photo Credit: Photo courtesy of Curt Wilson/Wind Rose Charters

The Pacific halibut bite on the North Coast is sizzling right now. With salmon virtually nonexistent, offshore anglers have honed in on the halibut, and they are coming over the rails at a record pace. Eureka, Trinidad, and eve Shelter Cove have all experienced some exceptional fishing. And we’re not talking about a couple halibut per boat, we’re talking full limits by early morning. It’s akin to how our salmon fishing used to be. A couple passes, load em’ up and head to the barn. Some of the credit should go to the weather. We had solid 10-day stretch of fishable water that started on the salmon opener and ended on Wednesday. As for location, it’s been the same for a long time. You’re in the zone once you reach 250 to 300 feet of water weather you’re fishing out of Eureka or Trinidad. The fish this year have been on the small size. The average is running around 12-pounds, but we’re seeing plenty in the 20-pound class and the occasional 50 to 60 pounder. With the salmon nowhere to be found, a wide-open halibut bite couldn’t have come at a better time.

Weekend marine forecast
Northerly winds and short period seas will persist through Thursday as high pressure builds over the northeast Pacific. Winds and seas are forecast to diminish slightly on Friday and for the weekend. On Friday, NW winds are predicted at 10 to 15 knots and N waves 7 feet at 7 seconds and NW 3 feet at 12 seconds. Saturday’s forecast is calling for N winds 5 to 10 knots and W swells 6 feet at 11 seconds and SW 2 feet at 16 seconds. Sunday’s conditions look similar with N winds 5 to 15 knots and NW swells 6 feet at 7 seconds and SW 2 feet at 15 seconds. These conditions can and will change by the weekend. For an up-to-date weather forecast, visit www.weather.gov/eureka/ or https://www.windy.com. To monitor the latest Humboldt bar conditions, visit www.wrh.noaa.gov/eka/swan. You can also call the National Weather Service at (707) 443-7062 or the office on Woodley Island at (707) 443-6484.

Eureka
Good news and not-so-good news out of Eureka this week. First the good news. The Pacific halibut fishing is as good as it gets right now. “I’ve never seen it like this,” said Tim Klassen of Reel Steel Sport Fishing. “The fish are mostly small, but there seems to be lots of them. Doubles and triples aren’t uncommon, and limits came pretty easy this week. Most of the action was between the 45 and 54-line in 250 to 320 feet of water. Usually there’s patches of fish here and there, but the patches are bigger right now. The water is a little on the warm side – it was 57 degrees on Tuesday – which explains why we’re seeing lots of Mackerel and Blue sharks. All the usual baits are working, including herring and salmon bellies. And the Mackerel works well too. The rockfish and lingcod bite at the Cape are also holding their own. Skipper Tony Sepulveda of Shellback Sport Fishing has made his way to the Cape six of his last seven trips and reports an excellent grade of ling cod. “Not as abundant as years past, but we’ve been bringing our A game, working hard and putting together limits every day,” said Sepulveda. “Of the 72 lingcod we boxed over that span, about a third were over 20-pounds, with 5 over 30. None have been under 10 and the top fish hit the scales at 36. The rockfish have been easy pickings and we’re finding some smaller pacific halibut on the reef too.  We did one day in the bay – my first of the season – and the California halibut bit well.  We boxed 18 fish to 14 pounds for limits by noon.” Now the not-so-good news. The salmon are nowhere to be found. A few guys have been trying, but without much success. There isn’t much bait around, and the water temps are a little on the warm side. North winds are predicted to blow for a few days, hopefully this will help cool the water.

“Like the rest of the coast, the Pacific halibut bite is the big story in Trinidad,” said Curt Wilson of Wind Rose Charters. “The bite has been wide open, with limits coming pretty easily. There’s no real spot better than the other, boats have been heading 2.5 miles straight out to 250 feet and doing well. Most of the fish are smaller, but there’s a few bigger ones being caught now and then. Most of our rockfish trips lately have been to Reading Rock, where we’re catching a good variety of fish. The Canaries have been the highlight so far, and we’re catching some nice vermilions and blacks as well. The ling cod bite has been slower, but we’re still getting limits. The ling cod bite has also been spotty inshore from Patrick’s Point to the harbor. The salmon effort has been really low. I don’t think many are trying, and for good reason as it seems that there aren’t many around.”

Shelter Cove
The salmon bite turned on and has been wide open for the last few days reports Jake Mitchell of Sea Hawk Sport Fishing. He said, “However, the wind started on Tuesday and ruined the party. Hopefully they’re still around when the weather settles back down. We were getting them off the edge of the banks outside the Hat where there was a lot of krill. There is a mixed grade with a lot of small fish and silvers, but there are quite a few nice ones too. The weather allowed some boats to get up to Gorda on Saturday for halibut and they did pretty well. Sounded like most boats had at least two halibut and a couple fish close to 80lbs.”

The salmon bite remains slow, but there’s a lot of effort reports Britt Carson of Crescent City’s Englund Marine. He said, “The boat launch was packed over the weekend with boats looking for salmon. There were some caught but overall, it’s been slow. There are quite a few silvers around though. There hasn’t been much effort on Pacific halibut this week as most are targeting salmon or rockfish. The rockfish bite has been really good, and lots of lings are coming in too. The California halibut bite remains slow, but did see a few hooked this week.”

Brookings
Ocean salmon season opens this weekend out of Brookings, but windy weather could limit success reports Andy Martin of Brookings Fishing Charters. He said, “Bottom fish anglers are catching and releasing a few kings in close, and commercial trollers, who are already allowed to fish, are finding lots of smaller salmon. Bottom fishing has been good, while halibut fishing is fair.”

The Rogue Bay continues to be slow for salmon according to Martin. “Cooler water is allowing late springers to race upstream. Few salmon appear to be holding in the bay,” added Martin.