Steelhead fishing rolls on despite lack of rain 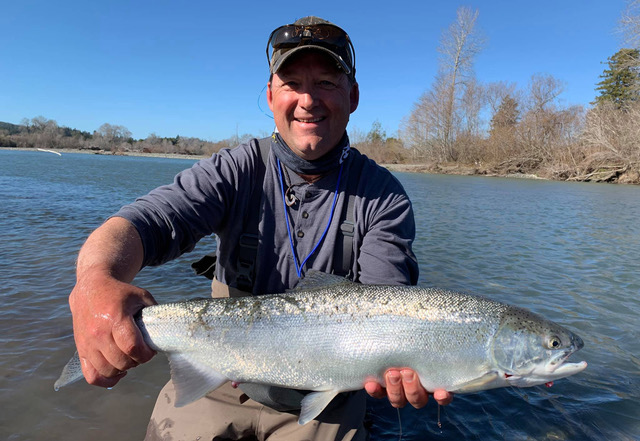 Bayside resident Kirk Younker landed a nice hatchery steelhead while fishing the Mad River on Tuesday. The 27-inch fish was entered into the NCGASA Mad River Steelhead Derby, where the top fish stands at 37.5-inches. The Steelhead derby will run through the end of February.
Photo Credit: Photo courtesy of Kirk Younker

While the lack of rain on the North Coast has some steelhead anglers looking elsewhere for green water, there are a few local bright spots. Especially if you like to throw on a pair of waders and head to the river bar. The Mad River was as good last weekend as it’s been all year. With plenty of bank access, it’s probably one of the best steelhead options at the moment. The river is a perfect height, and water spilling from Ruth Lake has kept the color a beautiful shade of green. Chrome-bright hatchery steelhead are being caught by anglers working the river from the hatchery all the way to the pump stations. Both the South Fork Eel and the Van Duzen are getting low for boats, but both have excellent bank fishing opportunities. Both are full of steelhead, and if you put your time in, tugging on a handful of fish is not out of the question.

If you’d rather fish from a drift boat, your options are somewhat limited. The main Eel is your best bet as it still has plenty of green water. There’s also a real good chance of catching a few bright steelies. The Klamath and Trinity rivers are both good options as well. Both are green, and should have their share of winter steelhead moving through.

With no substantial rain for nearly three weeks, and very little predicted for the rest of the month, the coastal rivers are all headed towards low and clear conditions. But that doesn’t mean there aren’t plenty of steelhead options.

Weather ahead
The ridge of high pressure sitting of our coast continues to deflect any substantial rain systems well to our north according to Kathleen Zontos of Eureka’s National Weather Service. “The next chance for rain will be this weekend, but it won’t be much of a soaker,” said Zontos. “Most of the rain will fall on Saturday and into Saturday night, with showers possibly lingering into Sunday. The Smith basin could see from 1 to 1.5 inches. In the Mad basin, totals range from a quarter to three-quarters. The Eel will see much less, anywhere from a tenth to a quarter. After Sunday, dry conditions will return through at least Wednesday,” said Zontos.

CDFW’s Annual Salmon Information meeting will be held February 27, at 10:00 a.m. to 4:00 p.m. at the Sonoma County Water Agency, 404 Aviation Blvd., Santa Rosa. The meeting will cover the 2019 ocean and in-river salmon fishing seasons, Central Valley and Klamath Basin river returns, 2020 abundance forecasts, and serves as an opportunity for the public to provide input regarding the upcoming ocean salmon season. Agenda and meeting materials will be posted as they become available. Contact Grace Ghrist for more info at 707-576-2375 or Grace.Ghrist@Wildlife.ca.gov.

CA Fish and Game Commission
The CA Fish and Game Commission will meet on Feb. 21 at the Natural Resources Building – Auditorium, First Floor, 1416 Ninth Street in Sacramento. Among the agenda items is the Upper Klamath-Trinity spring Chinook salmon sport fishing emergency regulations, where they’ll consider adopting a second 90-day extension of the upper Klamath-Trinity spring Chinook salmon emergency regulations. Also on the agenda is the Klamath River Basin sport fishing, where proposed changes to Klamath River Basin sport fishing regulations will be discussed. The full agenda can be found at https://nrm.dfg.ca.gov/FileHandler.ashx?DocumentID=177021&inline.
The meeting will be live streamed at www.fgc.ca.gov the day of the meeting.

Free fishing days this weekend in Oregon
It’s free to fish, crab or clam on the Saturday and Sunday of President’s Day Weekend, Feb. 15-16. During these two days, no fishing licenses or tags (including a Combined Angling Tag and a Columbia River Basin Endorsement) are required to fish, crab or clam anywhere in Oregon. Although no licenses or tags are required, all other regulations apply including closures, bag limits and size restrictions. For more information, visit https://myodfw.com/articles/2020-free-fishing-days-and-events

The Rivers:
Chetco/Rogue/Elk/Sixes
After last week’s exceptional steelhead fishing on the Chetco, the action slowed down as the river dropped to 1,000 cfs reports Andy Martin of Wild Rivers Fishing. “The color is still a nice green, but flows are down enough boats are starting to hit bottom in the shallow riffles,” said Martin. “Fish are still being caught, but catch rates are down to a fish or two per boat for the guides, and one fish for every four or five private boats. Lots of steelhead were donated to the Chetco’s hatchery broodstock program the last 10 days, with 91 total adults, including 49 females.”

The Elk and Sixes have slowed, but the Sixes remains floatable for steelhead according to Martin. “Catch rates have dropped with lower flows on the Rogue, but guides anchoring and running MagLip plugs are still getting steelhead on the lower river,” added Martin.

Smith River
The Smith remains low and clear and in need of a good shot of rain. Flows were just above 7-feet on the Jed Smith gauge on Wednesday and dropping. Boat pressure has been light as most guides have moved to other rivers. There are reportedly a few fish around, but overall, fishing is tough.

Eel River (main stem)
The main stem is in great shape and holding a nice shade of green. Boat pressure was fairly heavy over the weekend, and could get worse as other coastal rivers are dropping out. Boats are averaging one to four fish per trip. There are some nice adults in the mix and some runbacks have shown up. There’s also a good number of half-pounders around. Flows are predicted right around 2,000 cfs by Saturday.

Eel River (South Fork)
As predicted, conditions were perfect over the weekend on the South Fork. The boat pressure was heavy, but the fishing was excellent. Average scores ranged from two to five fish per trip. With no rain, the river is clearing and is forecasted to be roughly 450 cfs by the weekend. Most boats have moved to the main stem, but there’s plenty of good bank fishing opportunities.

Van Duzen
The Van Duzen is getting low, with flows hovering around 385 cfs on Wednesday. The river was reportedly full of fresh steelhead over the weekend and earlier this week. Flows are predicted to get down to 300 cfs by the Saturday, but will bump back up to nearly 800 cfs after the rain on Saturday. If the rains come as predicted, it could be off color for a couple days.

Mad River
The Mad is in great shape and the fishing is still good reports Justin Kelly of Eureka’s RMI Outdoors. “The fishing was excellent over the weekend, but the river has dropped a little, which has spread out the fish. Most of the fish are now holding in some of the deeper spots. It looks like we have a little bit of rain coming on Saturday that will increase the flows slightly. That should pull in some fresh fish, but it could put the river off color for a day or so,” added Kelly.