Wild steelhead harvest could end on the Chetco 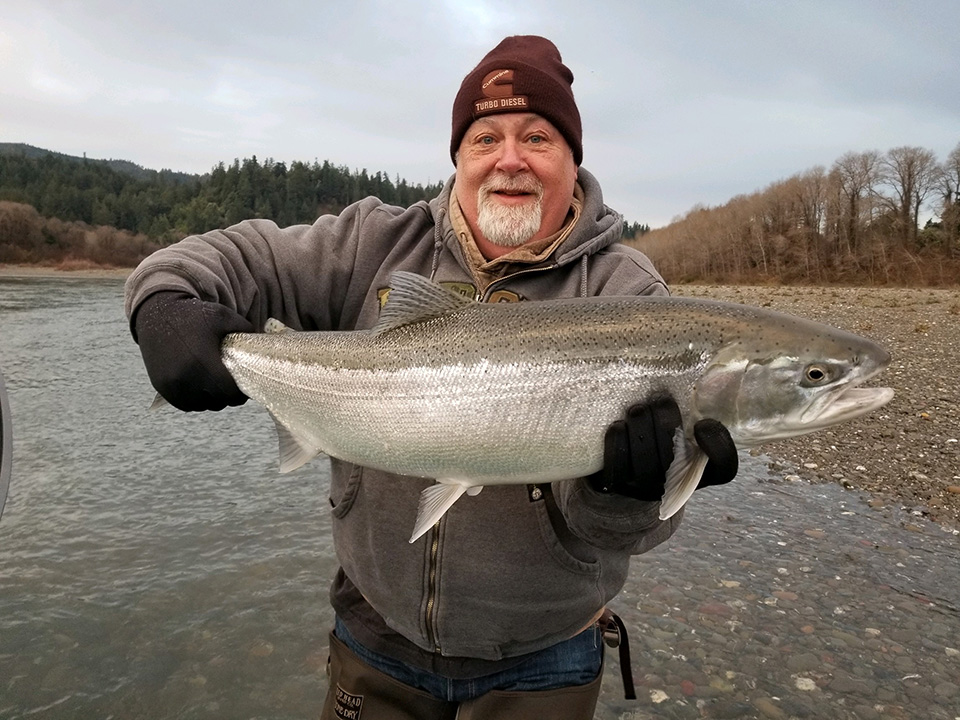 Tim Call of Eureka caught and released this native steelhead last January on the Chetco River. A petition to end the harvest of wild steelhead on some of Southern Oregon’s rivers, including the Chetco, has been submitted to the ODFW Commission.
Photo Credit: Photo courtesy of Alan’s Guide Service

A petition requesting a temporary rule change restricting harvest of wild winter steelhead in the Oregon Southwest Zone, which includes the Chetco River, was submitted on Nov. 4 by a group of Oregon fishing guides to the Oregon Fish and Wildlife Commission. If accepted, the emergency rule change would go into effect on Jan. 1, 2020. According to the petition, the proposed temporary regulation changes will provide angling opportunity while reducing direct harvest and increase spawning escapement of wild winter steelhead. Proposed measures are needed to protect winter steelhead fishing opportunity for future fisheries according to the petitioners. Due to low population forecasts and poor ocean conditions for the 2019-2020 season, ODFW implemented protective measures for wild fall Chinook salmon populations on the Oregon Coast that were based on actions developed through the 2015 Coastal Multi-Species Conservation and Management Plan and 2013 Rogue Fall Chinook Conservation Plan. It is expected that poor ocean conditions would similarly impact winter steelhead populations on the Oregon south coast, and fisheries closures around the region are going to result in angler effort shift to the remaining open fisheries. Other Southwest rivers that would be impacted by the restriction include the mainstem East Fork Coquille, Illinois, Elk, Pistol, Rogue, Sixes and Winchuck rivers along with Hunter and Euchre creeks.

According to Harvey Young, who’s leading the petition, amending the regulations management of steelhead fisheries will be consistent with wild steelhead angling regulations in the entire Southwest Zone as well as Oregon’s Willamette, Central, and Northeast Zones, and all but two rivers in the Northwest Zone (Salmon River and Big Elk Creek); as well as wild steelhead fishing regulations for every river in California, Idaho, Washington, Alaska, and British Columbia. “Since wild steelhead can be caught multiple times in the same season, or when they return in future seasons to spawn, releasing wild steelhead provides more angling opportunity by keeping wild steelhead in the system,” said Young. “Keeping wild steelhead in the river, rather than in the possession of the first angler that harvests it, will increase overall catch rates for anglers, and increase satisfaction with the fishery. In turn, this will encourage more steelhead anglers to participate in the fishery. This will also increase license sales.”

There’s plenty of opposition to the petition as well. Andy Martin, who runs Wild Rivers Fishing out of Brookings, will be at the commission meeting speaking about the petition. “Like many other anglers, I personally like to release wild steelhead,” said Martin. “But I am not about to say other fishermen should be forced to release them if there is no science to back it up. The ODFW opposed the previous petition to ban wild steelhead harvest because the runs in Southern Oregon are healthy. The Chetco has the highest spawning density of wild steelhead in the state. It can sustain limited wild harvest. Instead of forcing the biologists to change the rules, we should applaud them for successfully balancing harvest, spawner escapement and fishing opportunity. Habitat, ocean conditions and predation play a lot bigger role in steelhead populations than sport harvest. If the petitioners want to release wild steelhead, nobody is stopping them. If anglers want to keep a very limited number of wild fish, and the run is healthy enough to maintain itself, then they should be allowed to do so.” The current regulations for wild steelhead harvest allow for no more than one per day and three per year.

The ODFW Commission meeting will be held on Friday, December 6th 2019 in Salem beginning at 8:00 a.m. To view the agenda, visit https://www.dfw.state.or.us/agency/commission/minutes/19/12_Dec/index.asp

Weather ahead
Following Tuesday and Wednesday’s widespread rain, the next round of storms are set to arrive Friday evening according to Kathleen Zontos of Eureka’s National Weather Service. “The next storm will focus more to the south,” said Zontos. “From Friday evening through Sunday evening, we could see one to two inches in the Eel basin and a half to one inch in the Smith basin. Another system is forecasted early next week, and again, more rain will fall in the Southern Humboldt/Mendocino areas. Through Tuesday evening, we could see anywhere from a half-inch to an inch and a quarter in the Eel basin,” added Zontos.

The Rivers:
As of Wednesday afternoon, the Smith, Redwood Creek and Mad were the only rivers open to fishing that are subjected to low flow closures. The Eel and Van Duzen remained closed. The Department of Fish and Game will make the information available to the public no later than 1 p.m. each Monday, Wednesday and Friday as to whether any river will be closed to fishing. The rivers can be opened up at any time. The low flow closure hotline for North Coast rivers is (707) 822-3164.
Smith

After exceeded predicted flows, the Smith was the first North Coast river to open on Wednesday morning. Reportedly, there were plenty of fish being caught. As of mid-morning Wednesday, flows were right around 1,100 and starting to level off. It will likely stay open through Thursday, but may close before the weekend. More rain is on the way, and it could open back up early next week. For river level predictions, visit https://www.cnrfc.noaa.gov/graphicalRVF.php?id=CREC1

Chetco/Elk/Sixes
Most anglers have given up on the Chetco estuary for the season, as most of the salmon are now upriver, above the deadline reports Andy Martin of Wild Rivers Fishing. He said, “ODFW will make a decision on when the river will open after the storm is over. Right now, the biggest increase isn't forecasted until the end of next week. ODFW did its final hatchery netting last week and found big schools of salmon at the Highway Hole to meet its broodstock collection goals. Most of the fish netted last week were released.

Heavy rain is falling near Port Orford, and could boost flows any time for the Elk and Sixes, which have been too low to float with a drift boat. Call Elk River Hatchery's flow hotline at 541-332-0405. Flows on the Elk need to be around 3.5 feet to safely float. They were only 1.7 feet the beginning of this week.”

Mad
The Mad opened Wednesday morning as flows were right around 400 and rising. According to the low-flow hotline, it will close to fishing prior to Thursday unless increased flows warrant keeping it open. For river predictions, visit https://www.cnrfc.noaa.gov/graphicalRVF.php?id=ARCC1

Redwood Creek
Redwood Creek was hovering at 600 cfs late morning on Wednesday, and was open to fishing. Like the Mad, it is scheduled to close prior to Thursday according to the low-flow hotline. For river level predictions, visit https://www.cnrfc.noaa.gov/graphicalRVF.php?id=ORIC1

Eel
Main
Flows were right around 300 cfs on the Scotia gauge on Wednesday morning, but it’s not likely to open. Following the weekend rain, it could open to fishing early next week. For river level predictions, visit https://www.cnrfc.noaa.gov/graphicalRVF.php?id=SCOC1

South Fork
The Miranda area was around 140 cfs on Wednesday morning and still rising. Not predicted to open over the next couple days, but early next week could be a different story. For river level predictions, visit https://www.cnrfc.noaa.gov/graphicalRVF.php?id=MRNC1

Van Duzen
Peaked at just under 90 cfs on Wednesday morning, and not predicted to rise again until Sunday. For river level predictions, visit https://www.cnrfc.noaa.gov/graphicalRVF.php?id=BRGC1