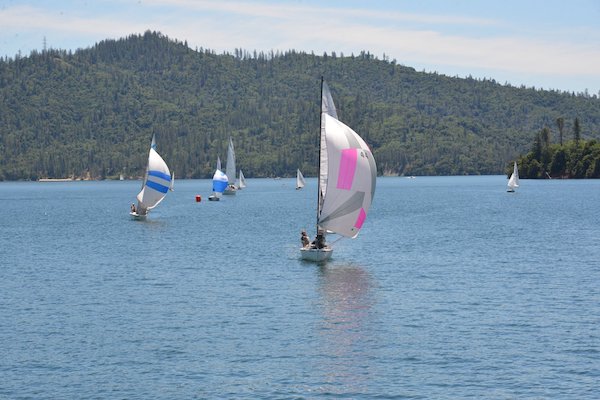 The Whiskeytown Sailing Club will be hosting the 55th Annual Whiskeytown Memorial Weekend Regatta on May 25th and 26th at Whiskeytown Lake. The Regatta is a two- day sailboat race which attracts sailors from all over California, Nevada, Oregon and Washington.

Each year, more than 60 sailors enter their boats in the competition. “There are many sailors and their families that have been coming for almost all of the 54 past regattas, as well as sailors new to racing,” said Commodore Jim Farmer. “We are so fortunate to have our beautiful Whiskeytown Lake to hold this historic event as well as a great team of volunteers to host the annual regatta.”

The race will begin at the Oak Bottom Marina on Saturday, May 25th at 10:30 a.m. Brandy Creek Marina and launch ramp remain closed due to the Carr Fire. Following the race on Saturday, the Whiskeytown Sailing Club will host a Regatta Dinner at 6 p.m., advance reservations are required for this dinner. The event will conclude with an awards ceremony following the final race on Sunday, May 26th.

The Whiskeytown Sailing Club welcomes new members! For more information on how to join, go to WhiskeytownSailing.org.


About the Whiskeytown Sailing Club

The Whiskeytown Sailing Club began meeting at Whiskeytown Lake soon after the dedication of Whiskeytown Dam by President John F. Kennedy on September 28, 1963. It has sponsored the Whiskeytown Memorial Regatta since that time, hosting as many as 300 sailors. Some of its sailors are third generation, following in the footsteps of their parents and grandparents. The WSC has an excellent relationship with the local Coast Guard Auxiliary Flotilla 39, which brings its patrol boats and safety expertise to the club’s sailing events.