Good Day On the Sacramento River 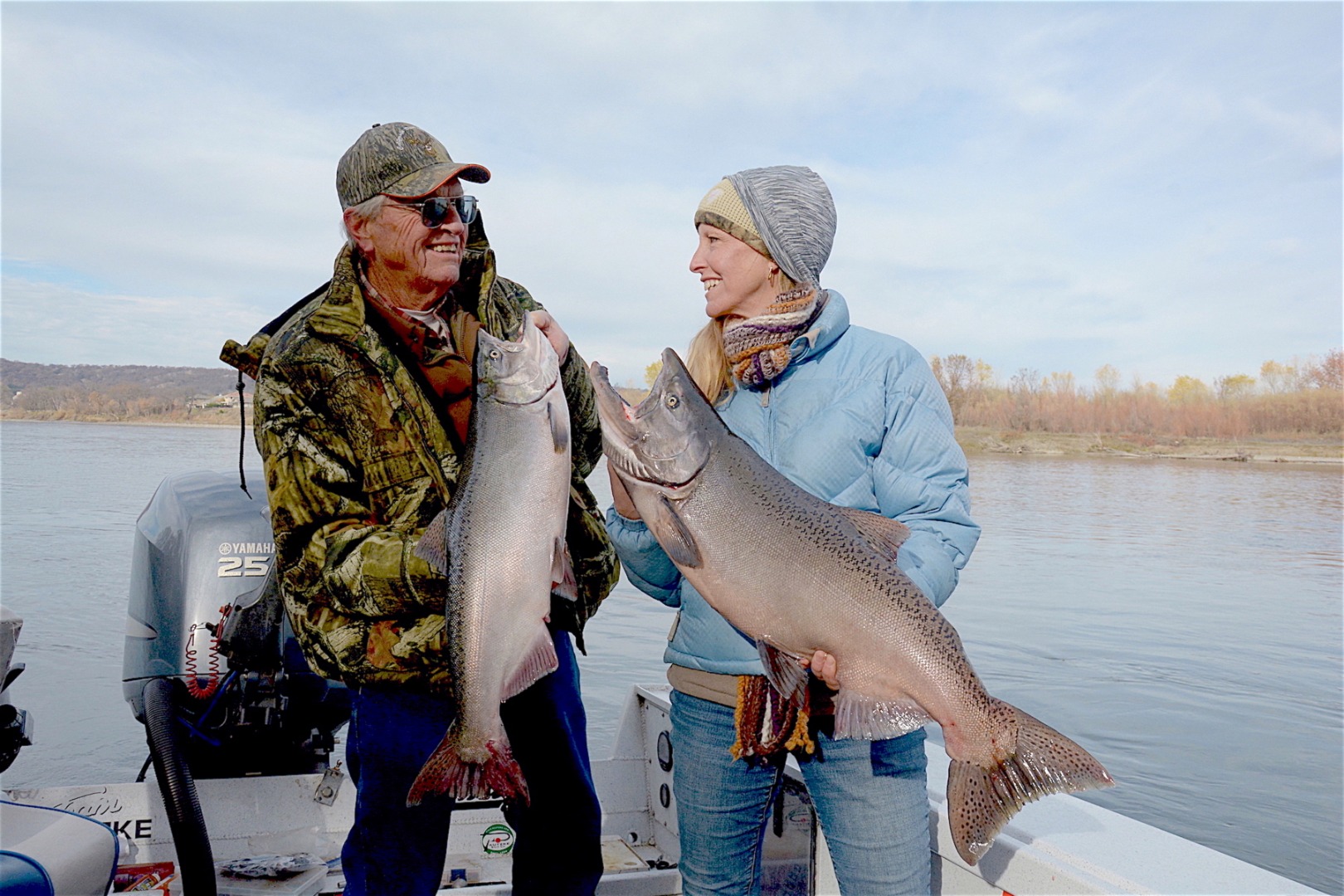 With the salmon season winding down on the Sacramento River I fervently hoped to get on the water at least one more time.  My idea was to have a little fun on my favorite northern California river, and introduce my adult daughter Meredith to river salmon fishing under the tutelage of guide Mike Bogue, who’s been guiding full time on the river for 27 years.  Our trip, cancelled once after rain muddied the water, was finally on for Friday the 7th of December.

Meredith was excited to be on the river for a few hours. A whitewater canoeing instructor in her teenage years, and now the mother of four, she looked forward to the boat ride and the possibility of catching a fish, in this case, a late fall Chinook (king) salmon. I wanted to catch a fish also, and so did Bogue’s son Jaret who came along to help out.

To say that it was cold when we left the Ball’s Ferry launch ramp at 6:30 a.m. is putting it mildly. Heading downriver to the well known Barge Hole, we cruised slowly in Bogue’s 23-foot North River Scout. The river was low so he was playing it safe, and besides, there was really no reason for us to freeze along the way. With any luck the fish would still be lined up in the Barge Hole like they were a few days before.

There were several other boats at the Barge Hole when we got there, but, unlike some days during the peak of the salmon season, there was still plenty of room to maneuver. A few minutes after our arrival, our rods were rigged and we were all feeling the pull of big bottom hugging T-60 Flatfish. Four ounce round lead weights on droppers a few feet ahead of the lures kept them in the near-to-the-bottom strike zone.

It took quite a while, but one minute I was routinely raising and lowering my rod tip and the next minute I was on my feet and reeling like mad.

“Fish on!” I yelped.  And just like that, after a head shake or two, it was gone.

You really don’t need to know what I said just then, but after the shock wore off it was back to the same routine.  Pump the rod and allow the lure to wobble downstream and, hopefully, tease a salmon into taking a swipe at it.

The next strike came on Meredith’s lure, and she handled it like a pro. In a few minutes, the chrome bright fish was in Bogue’s net.

“That shows us who the real angler in your family is,” Bogue jabbed. “Give your dad some pointers Meredith and maybe he’ll land one too.”

After that things slowed down in the Barge Hole, so we stowed our tackle and motored downstream to another spot Bogue has faith in.  I am happy to say that before the morning was over everyone in the boat, including yours truly, caught a fish to take home.  Jaret Bogue got the biggest one, but all of the fish were hefty and bright and everyone of us was all smiles.

For numbers, salmon fishing is generally at its best in late September and October, but for my money, late November and early December are the best times to be on the water. Normally, late fall salmon are bright and fresh when they arrive in the upper reaches of the river. Besides being a whole lot of fun to catch, their flesh tastes great baked, grilled, fried or smoked.

The salmon season ends on December 16, but there’s always next year to plan for. And, don’t forget, the Sacramento has some of the best wild trout fishing in the state and the season is open all year round.  If you’re into river fishing, and would like to plan a trip, give Mike Bogue a shout at (530) 246-8457 or check his site: http://mikebogue.com/ Jaret Bogue is understandably happy with the fine late fall salmon he caught on the Sacramento River below Ball’s Ferry on December 7.
Photo Credit: John Higley Despite the chill, our’s was a good day on the river. Before the morning was over everyone in the boat had a fish to take home. Here I’m displaying mine while Meredith looks on.
Photo Credit: Mike Bogue