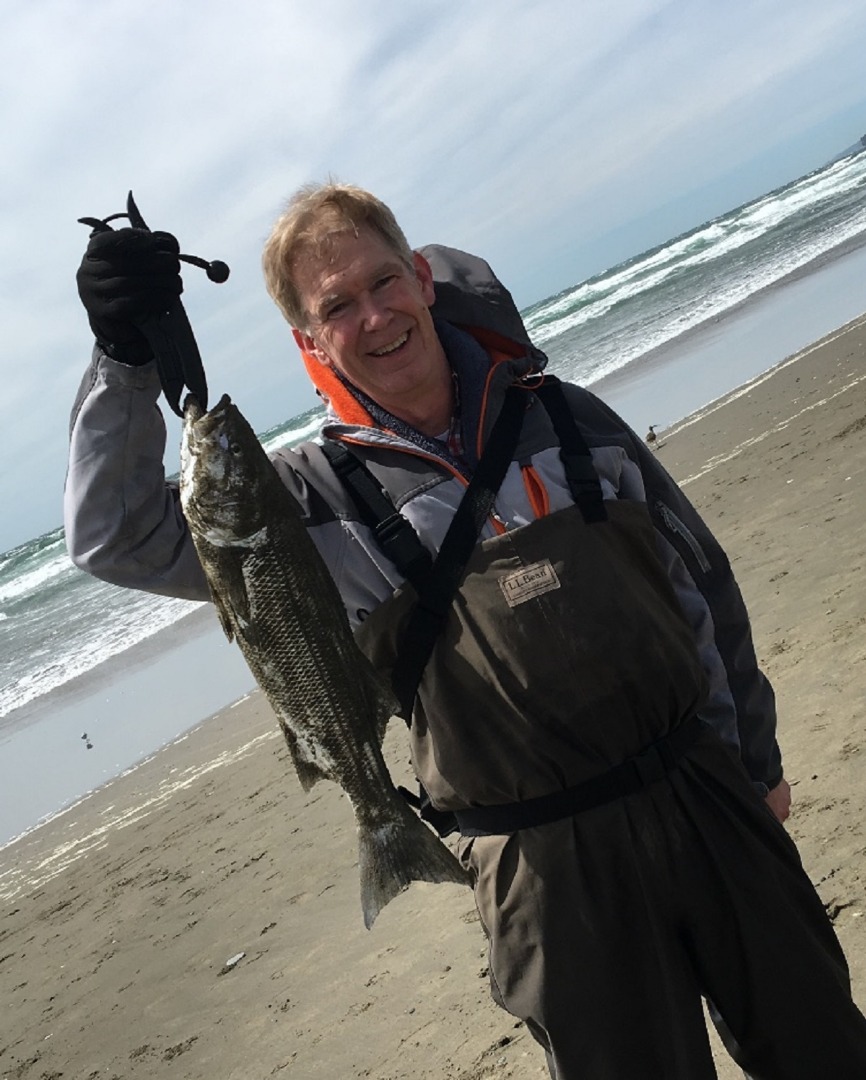 Looking out at the expanse of shoreline, white caps were visible up and down the beach and out toward the horizon as far as the eye could see.  These were 15-20 knot winds blowing steadily onshore this past Sunday afternoon at Ocean Beach. I’ve felt the sand blowing into my eyes and pelting my face far worse, but these were still borderline “do I fish or do I stay home” winds.  That said, they couldn’t have been that bad because the Great Highway was still open both ways and there were still a handful of beachgoers hunkered down on the sand enjoying the sun, but probably thinking the same thing (“should we stay or should we go?”).

To the south of me, and where I was heading, there were three fishermen who were obviously fishing for striper using fish finder rigs and sand crabs (preferably of the “soft shell” variety).  They had even dug out a small bunker fortified with driftwood to protect their tiny barbeque grill from the wind. I guess their original plan was to fish and grill up some sausages at the same time.

In any case, I was at this particular spot because I had been fishing it the previous week and watched two different fishermen pull out a striper each (probably no more than 26” inches) also using fish finder rigs.  I had caught four perch using my Carolina rig that day, but returned to possibly dig myself up some sand crab and use a fish finder rig, as well. This is not my type of fishing, as I like to hold the rod and feel the strike.  With a fish finder rig, you use a 3 oz. or up to 5 oz. pyramid weight, bait with soft shell sand crab, put the rod in the spike and then wait around for a striper to show up. Waiting around for these fishermen seems mostly about looking for more soft shell sand crab with a hand net or having a smoke and a chat with their fishing buddies.

Well, I ventured onto the sand and decided that I’d fish for maybe an hour or so.  I didn’t feel up to looking for some choice sand crab and decided I’d instead just put a 6” Berkley Gulp! camouflage sandworm on my #2 baitholder hook (Carolina rig, 1.5 oz. sliding weight) and do my best to cast out directly into the strong wind.  I probably could only cast out half of what I normally could cast on a better day (I’ll take a 3 knot breeze, please), but that’s probably far enough given that the guys I saw the previous week caught their stripers perhaps 20-30 yards from where they were standing.

My inner-voice was telling me to go home, that history has taught me that I never catch anything substantial unless the conditions are ideal.  Despite the unfavorable winds, though, I had two things in my favor: 1. It was about half way through the incoming tide, and 2. I had seen stripers caught in this same spot of water just a few days prior.  The spot was just to the side of a significant outflow of deeper current and I’m guessing the stripers were positioning themselves on the outskirts of this outflow because smaller fish are going to be thrown off balance when encountering this current.  Would be nice to use an underwater drone with a camera to let me know what’s really going on down there, but I just know structure is important and where you see evidence of it, you’re better off fishing nearby it than fishing a stretch of beach without it.

I only used half my strength for my first cast just to make sure all was well with my line, reel, and rig.  I’ve snapped many a line before because I was too eager to get bait in the water and didn’t see that line was wrapped around the rod’s tip or there was a hidden wind knot from the last fishing session that gets caught in the guides.  Once I felt comfortable that all was good, I tried my best in chucking that 1.5 oz. weight out as far as I could. Turns out it wasn’t very far at all--maybe 40 yards or so. Enough to get into some deeper water and then retrieve it across a flatter expanse of sand and unseen troughs and holes (that’s what I was hoping for, anyway).

After about 15 minutes of chucking and moving around the area, my rod suddenly bent down hard.  Not super hard, but enough for me to know it wasn’t a 2 pound pregnant perch (which are more common in summer anyway).  The rod stayed continually bent, moving up and down a little--this definitely tells me it’s a striper because if I had hooked a large crab, there would be no up and down oscillation and, if it was a perch, there wouldn’t be that same level of anger present. Yes, anger. I can tell stripers get really mad when they make the mistake of biting on a hook instead of a small smelt or other baitfish.

Well, it still wasn’t much of a fight.  I reeled onto the shore what would turn out to be a 25” inch striper that weighed 4.5 pounds.  I was walking back to my sand spike and bucket when one of the other three fishermen (the guys with the bbq pit) saw my catch and alerted his buddies.  They all rushed over and I asked one of them to take a picture for me (thanks, Nino!). They asked me what I was using for bait because it turns out these were boat fishermen and didn’t have a lot of experience on the sand and in the surf.  I told them that I think what they were doing fishing with fish finder rigs and sand crab was still their best bet and that I got a bit lucky catching a nice fish with a 6” camo sandworm. Still, they asked if they could each have a 6” worm and I happily obliged (I’m pretty sure karma would see to it that I don’t catch another striper for a while had I even thought about refusing!).

I tried fishing another 10 minutes or so, but I could see my striper’s tail waving back at me from the bucket I had placed him in (well, I don’t think he was actually waving, but more like escaping). He really wasn’t secure and I didn’t bring a big enough bag to contain him (my mistake for not being prepared). I wasn’t so worried that a seagull would harass him, but that he’d hop out of the bucket onto the sand and then a roving dog might decide to take a bite.  Plus, the wind was unrelenting. I already had a great fish and there have been too many times when I would catch a nice striper or a few big perch early on in the session and then spend four more hours trying to “chase that dragon” of a feeling only to end up dead tired and nothing else to show for it.  Instead, I’ll get home earlier than expected and will be able to have enough time for the fish to get properly prepared for that night’s dinner.

So, there are more stripers along the coast now.  They don’t seem to be of the “cow-size” variety, yet, but some of those will probably/hopefully begin to show up next month.  Speaking of cows, I’m told that stripers larger than 34” are most likely the older, mature females that are critically needed to spawn and bring more baby stripers into the world.  If I’m so fortunate to catch a striper of this size (34” or larger), I will carefully release back into the water. It’s a fairly old fish anyway and its meat, which probably has accumulated a decent amount of mercury and other toxins, is not as tasty as a younger, 20” to 26” striper.

Consider doing the same “catch and release” for any striper 34” or longer.  It’s probably not safe eating and it could really help the striped bass fishery long term.  Plus, you’ll be sharing the same thrill with someone else down the line should that same fish make the same mistake twice!  No real judgment, either way--I know the thrill of catching a big fish like that is amazing and one’s first instinct is often the desire to show the world that you really scored.  For your thoughtful consideration, though. I definitely want stripers out there long after I’m gone for my kids and their kids to fish someday and I’m sure many of you do, as well.

Ocean Beach in early May
Photo Credit: Jerry Back Then a couple of well-placed chops
Photo Credit: Jerry Back Striper now looks like it was just bought from the market
Photo Credit: Jerry Back