Fish Are Moving Into The Rivers 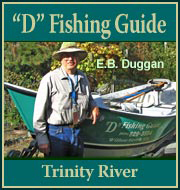 Spring Chinook salmon are in the Upper Trinity as well as in the Lower Klamath. Guides have been fishing the Klamath estuary since the first of the month but not a lot of reports. In talking with Allen Borges of Allen Borges Guide service, he was just setting up his fish camp. The report I received even though the Yurok Tribe has not opened the reservation to the general public yet some services are open with limitations while others are closed. The river is open to launching at Requa and Klamath Glen (public launching areas) but unknown about other areas at this time. The guides that are fishing are trying to be respectful of Tribal Lands and have reported lots of moss in the lower river.

At this time the Hoopa and Yurok Reservations are still closed to the general public because of the Covid-19 and are only open to local residence. The Hoopa reservation is not open to fishing yet as they are still under self-quarantine and there is no word about when the Tribal Council may consider opening. The good news is that there is no fishing for Spring Chinook salmon below the South Fork of the Trinity River. From what I have been able to find out is that most springers are already up past Cedar Flat. For this week Highway 299 at Cedar Flat is controlled traffic because of the fire mop-up going on, so please be cautious when driving in this area.

We are now in the summer water releases on the Trinity River. So, you are going to see some low clear water with lots of moss. You are going to have to use stealth when fishing from the bank.

Fishing: I am not getting very many reports about fishing the Upper Trinity but I do know that there are spring salmon up there. In talking with Patrick of the Del Loma RV and campground, that there are people starting come up to the area to camp. This last weekend Patrick said that he was full and had reservations for the next week. Some novices were out fishing but not having much luck fishing. The main group of seasoned fishers have not arrived yet so most of the fishing is going on up at the lakes.

Mid-Klamath to Happy Camp: The Klamath River at Weitchpec is flowing @ 2,798cfs. This is a decrease of 595cfs from the last week. Iron Gate Dam is releasing 944cfs as of this afternoon.

Trinity Lake: The lake is 48ft below the overflow (an increase of 2ft) and 7\1% of capacity (a decrease of 1%) with  inflows of -39cfs and releasing 1,984cfs into Lewiston Lake with 1,546cfs being diverted to Whiskeytown Lake and on to Keswick Power Plant, which is releasing 12,462cfs into the Sacramento River.

Temperatures in the Valley last week had a high of 93 and a low of 50 degrees. Rain for the week was 0.00in with a water year to date of 42.47 inches, with snow in Willow Creek of 1.45in. Forecasts for next week are for highs of 94 and lows of 56. The temperatures for next week are expected to be at some decent fishing conditions which is good because we need a chance to go out and fish after being cooped up because of the Covid-19.