Rivers in the Sky: How Atmospheric Rivers Impact Fish Communities 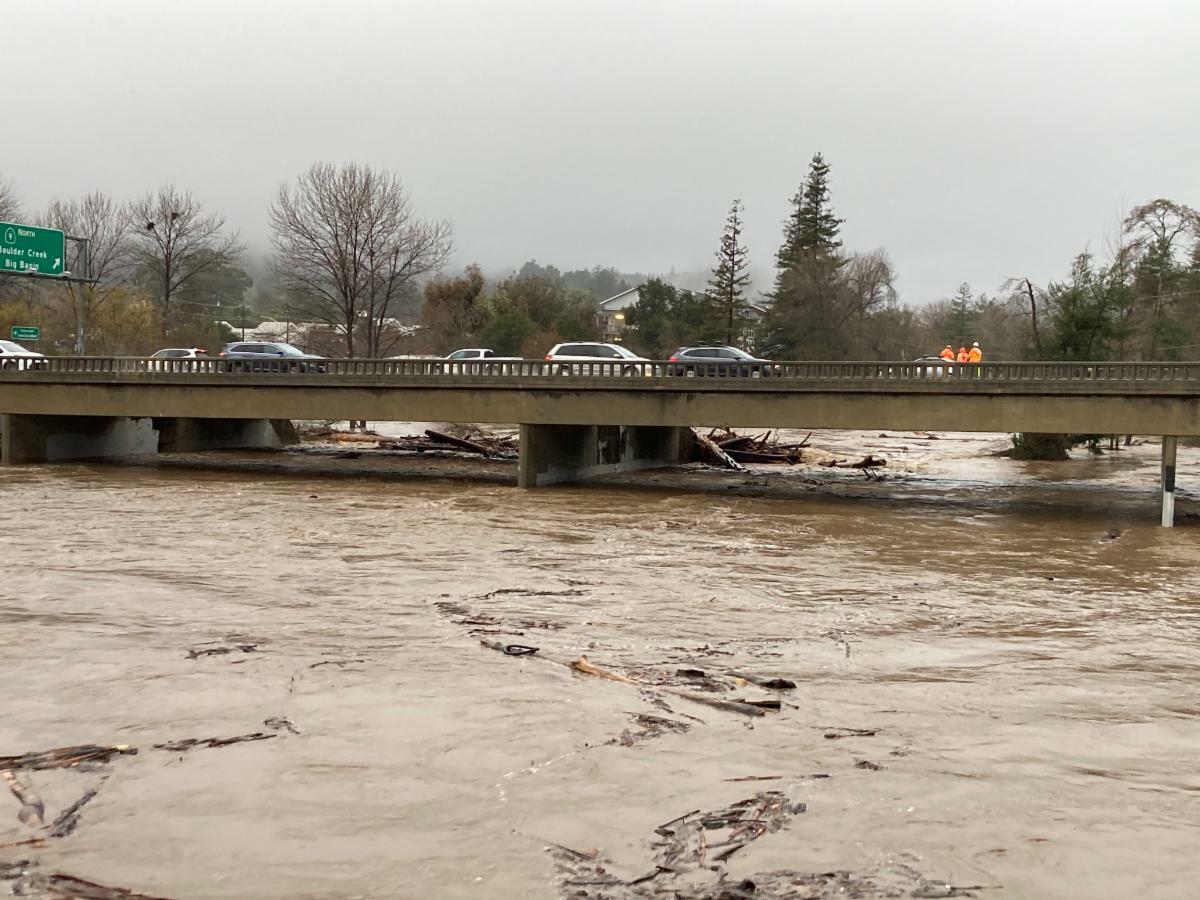 Recent torrential rain and severe storms in California are due in part to massive storm systems known as atmospheric rivers. Although this term may seem abstract at first glance, it actually refers to rivers in the sky (atmosphere) that are made up of large volumes of water vapor. These storms will often appear as trails of wispy clouds that can be hundreds of miles wide. As the clouds move over land, the water vapor cools and is released as precipitation or rain. Strong atmospheric rivers have been known to carry 7.5-15 times the average flow of water at the mouth of the Mississippi River and on average, a few atmospheric rivers in a year make up 30-50% of the west coast's total annual rainfall. However, these recent atmospheric rivers seem to be above the typical average and continue to follow one after another. The consequences to human communities caused by atmospheric rivers are known all too well, and in the last few weeks, they have been clearly demonstrated. However, the impacts of these strong storms on fish are not discussed as frequently. There are both beneficial and adverse effects of atmospheric rivers on fish communities and it will become increasingly important to monitor the impacts as atmospheric rivers are predicted to grow larger and occur more frequently due to climate change.

A critical benefit of atmospheric rivers for anadromous fish is the opening of migration corridors that were previously disconnected. In recent years, California has experienced longer and more severe droughts, creating prolonged periods where the rivers remain disconnected from the ocean providing very limited opportunities for native anadromous species like Chinook salmon and steelhead to make it from the ocean to their natural spawning grounds upstream. Currently, rivers up and down the coast are forcing reconnections with the ocean, creating a clear path for migration for these native fish. Periods of high precipitation also increase reservoir storage that can later be released during low flow or drought years to reduce water temperatures in rivers downstream and keep migration corridors open as long as possible. Rising waters also provide and expand floodplain habitat, ideal for sheltering and nurturing juvenile salmonids and other native fish species as they migrate downstream. Additionally, research has shown that increased turbidity, or cloudiness, from runoff and river bed movement protects juveniles from predators that rely on clear waters to detect prey.

Although high-tide flooding, a term that refers to the conjunction of irregularly high tides, storm surge (brought on by atmospheric rivers), and lots of precipitation, can be detrimental to coastal cities, this “perfect storm” can actually facilitate movement for migratory species like the endangered Delta smelt. Rising tides serve as a cue for smelt to begin migrating upstream to spawn. The shift in tides reduces the amount of energy smelt typically use to swim against strong currents and higher turbidity can shield them from predators. Native fish species may also be better adapted to these flashy environments and atmospheric river conditions, giving them a leg up over non-native species that are not as accustomed to these conditions. Although atmospheric rivers provide unique opportunities for native fish species to thrive, there are a few drawbacks to these events.

Increased river flows reconnect spawning habitat for some migratory fish, but when waters recede too quickly, fish can potentially become stranded in small isolated pools during their journey to spawning grounds. In addition, turbid waters do offer juvenile fish protection, but increased runoff from land also introduces potentially harmful pollutants into the watershed. Agricultural runoff, including pesticides and fertilizers, is especially detrimental to fish communities and can lead to harmful algal blooms that are toxic to humans and wildlife. Runoff from roadways and overflowing storm drains introduce contaminants from vehicles, such as oil and gasoline, and other human-generated pollutants like sewage water. Large sediment influxes and deposits from fire burn scars also lead to poor water quality that can be harmful and even deadly for many fish species. Powerful atmospheric river storms, like the ones California is currently experiencing, are dangerous for humans and make it difficult and sometimes impossible for scientific fish monitoring efforts to continue, which creates lapses during vital data collection periods. Atmospheric rivers also cause catastrophic damage and often loss of human life in impacted communities.

Although they are growing more severe and frequent due to climate change, atmospheric river storms are natural processes. These systems can create many potential benefits for fisheries, on both short and long-term time scales, indirectly benefiting humans that enjoy recreational fishing and a tasty salmon dinner. However, it is important to keep the more harmful impacts in mind when it comes to understanding the broad-scale impacts on both native and non-native anadromous fish.