Wide Variety of Tuna Caught off the North Coast 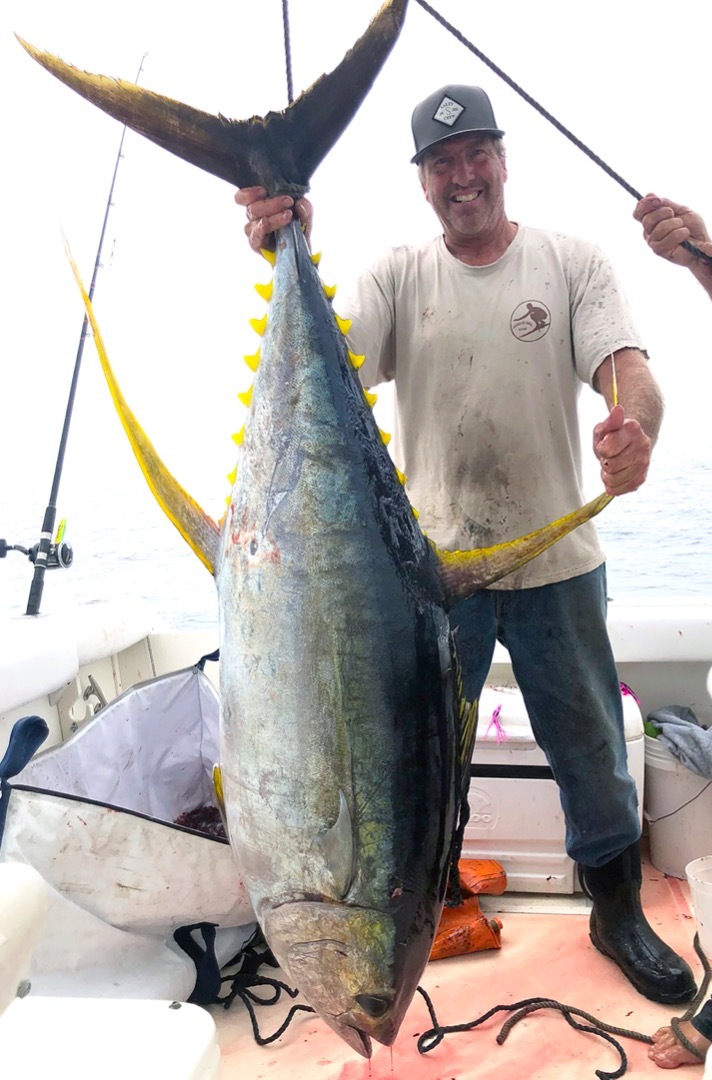 John Neill of Shelter Cove poses with his huge 151-pound Yellowfin tuna he landed Sunday while trolling for albacore at Vizcaino Knoll out of Shelter Cove.
Photo Credit: Photo courtesy of John Neill

There is some absolutely insane offshore fishing happing right now off the Northern California coast. From Fort Bragg to Crescent City, the albacore bite has been wide-open. But that’s just part of the story. What has everyone talking is the number of exotic, warm water species. Fort Bragg has seen the widest variety. A wide-open albacore bite on Sunday afternoon 30 miles offshore quickly turned into a tuna frenzy as thousands of 100- to 300-pound bluefin, bigeye and yellowfin tuna made an appearance. Several bluefins were hooked, but the under-gunned anglers didn’t stand much of a chance in landing one of those bruisers. However, there were quite a few bigeyes up to 160-pounds landed. Shelter Cove also got in on the exotic action as a 151-pound yellowfin tuna was landed on Sunday. The lucky boat had several others hooked but anglers were unable to coax them to the boat. Simultaneously, a nice size Dorado was landed right next to the boat fighting the yellowfin. You can’t make this stuff up. Closer to home, both Eureka and Crescent City have seen epic albacore action the last few days. Marc Schmidt of Coastline Charters boated 52 albies Sunday fishing 43 southwest of the entrance. The fish are big, too, sporting a solid 20-pound average. Out of Crescent City, one of the charter boats landed 40 albacore on Monday roughly 50 miles offshore. Weather and ocean conditions look favorable for the next few days. I, for one, can’t wait to see what the next warm-water surprise will be.

Weekend marine forecast
Relatively calm conditions will persist through Thursday before the wind increases slightly by the weekend. As of Wednesday, the forecast out 10 nautical miles for Friday is calling for winds out of the north 5 to 10 knots with north swells 3 feet at five seconds and northwest 2 feet at 11 seconds. Saturday’s forecast is calling for north winds 5 to 10 knots and waves from the north 4 feet at four seconds. Sunday the winds will be from the north up to 5 to 10 knots and west swells 5 feet at 10 seconds. These conditions can and will change by the weekend. For an up-to-date weather forecast, visit www.weather.gov/eureka/ or www.windy.com. You can also call the National Weather Service at 443-7062 or the office on Woodley Island at 443-6484.

The Oceans:
Eureka
With the warm water within reach and flat calm seas, the Eureka fleet is focused on tuna. Boats did well Sunday 45 miles southwest from the entrance on big albacore. The weather wasn’t as good Monday, but a few boats made the trip. Supposedly the high boat landed 18. The forecast for the next couple days looks good, and the warm water currently off Cape Mendocino is making its way slowly north towards Eureka.

Shelter Cove
According to Jake Mitchell of Sea Hawk Sport Fishing, boats that ran for tuna on Sunday did well. “Scores ranged from 5 to 20 fish, but they were all a good grade,” said Mitchell. “Most of the effort was around the Vizcaino Knoll. The rockfish bite is still great, but the lings are still tougher to come by. We’ve been spending most of our days at the Ranch House.”

Crescent City
Tuna is the main focus at the moment out of Crescent City. A few boats went out Sunday roughly 36 miles, with the top boat landing 14 big albacore along with a 42-inch Dorado. Monday, one of the local charters put in 40 tuna 50 miles offshore and a private boat had 12, all between 25 and 35 pounds along with a Dorado. According to Britt Carson of Crescent City’s Englund Marine, quite a few boats made the run on Tuesday and are catching all they can handle.

Brookings
“Lingcod fishing has improved out of Brookings as fish move back into shallow water,” said Andy Martin of Brookings Fishing Charters. “Albacore are still 50 miles or more offshore. Pacific halibut fishing has been good, but the quota is nearing its limits, with around 5 percent remaining. Rockfish action has been good.”

Low Flow River Closures began Sept. 1
North Coast rivers that are regulated by low flow closures, including the Eel, Mad, Mattole, Redwood Creek, Smith and Van Duzen began angling restrictions on Sept. 1 and will run through April 30 in 2022. Also new in 2022, a low-flow angling restriction was added to the section of the Eel River from the mouth to Fulmor Road at its paved junction with the south bank of the Eel River, Sept. 1 through April 30. When a low-flow closure occurs in this section of the Eel, it will be closed to hook-and-line fishing; other legal fishing methods are allowed during this timeframe. The Department of Fish and Game will make the information available to the public by a telephone recorded message updated, as necessary, no later than 1 p.m. each Monday, Wednesday and Friday as to whether any stream will be closed to fishing. The rivers can be opened up at any time. The low flow closure hotline for North Coast rivers is 707-822-3164. NOTE: The main stem Eel from the South Fork to Cape Horn Dam and the Mattole River will be closed until January 1, 2023.

The Rivers:
Lower Klamath
Flows are still high, roughly 3,500 cubic feet per second on the lower Klamath gauge as of Wednesday. The releases from Iron Gate arrived on the lower river Monday and it quickly muddied up. It was still dirty as of Wednesday, and could take a few days to clear. There is a mix of jacks and adult salmon in the river and a few steelhead as well. As a reminder, the lower river quota has been met and salmon longer than 23 inches must be released. Your adult Chinook releases need to be recorded on your North Coast Salmon Report Card as normal. The bag limit is two salmon less than or equal to 23 inches and two hatchery steelhead.

Chetco/Lower Rogue
A few salmon a day are being caught in the Chetco estuary, with some of the kings topping 30 pounds, reports Martin. “Monday was the best day so far this season, with more than a dozen salmon landed. Anglers targeting bottom fish closer to the harbor also are encountering salmon, a sign bigger numbers of kings are staging just out from the jetties. Salmon fishing also remains good in the Rogue Bay, with a few coho showing up and plenty of kings. Lots of jacks also are showing in the catch.”