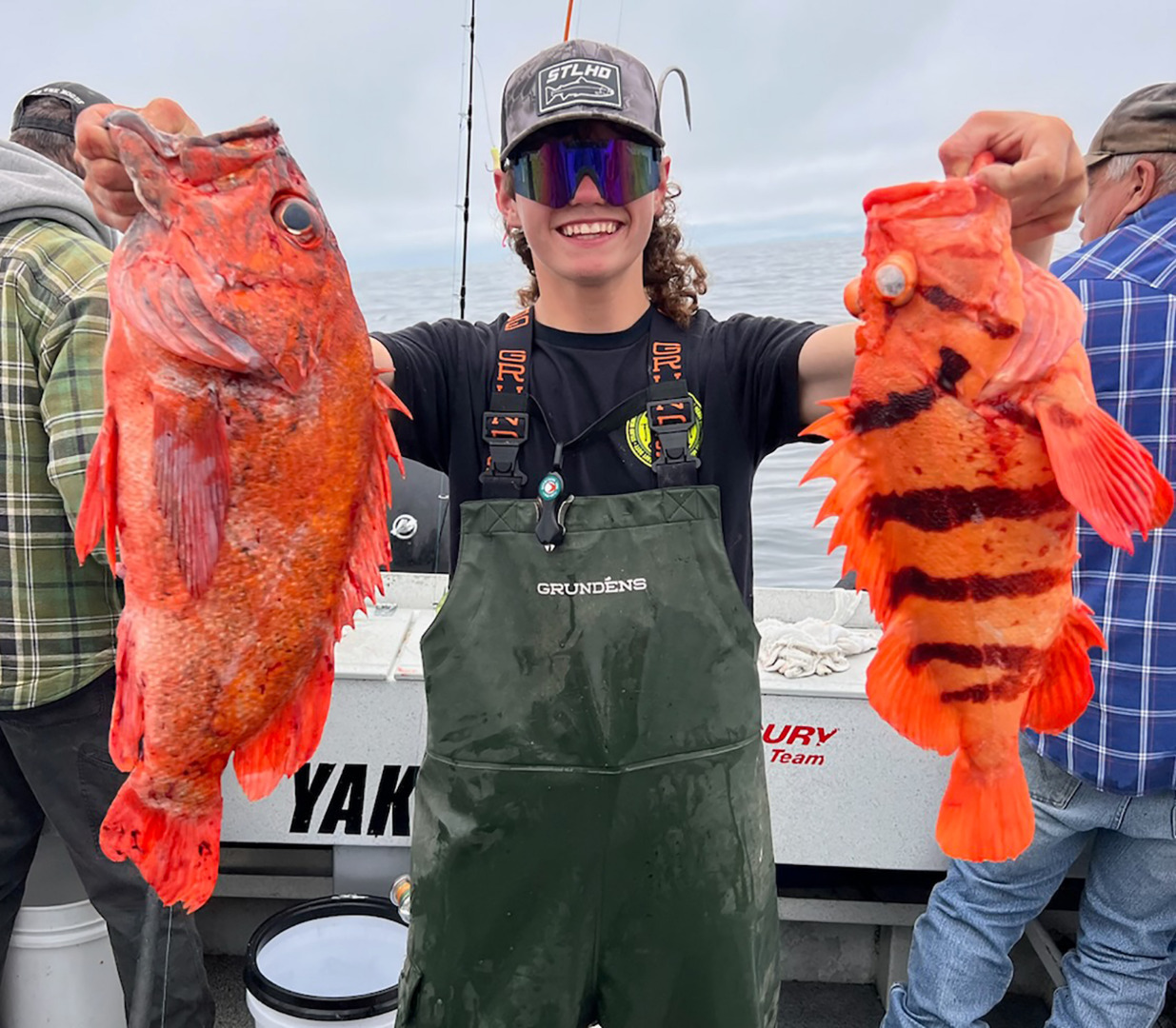 In response to recent scientific information suggesting some nearshore groundfish species are in decline, significant changes to California’s groundfish sport fishing regulations are expected starting next year, according to a press release issued by the California Department of Fish and Wildlife. The upcoming changes were developed by the Pacific Fishery Management Council (PFMC) to reduce pressure on these stocks, resulting in shorter fishing seasons in nearshore waters, but new opportunities in deeper water.

In 2022, nearshore groundfish fishing season lengths ranged from eight to 10 months, but in 2023, they are expected to shrink to not more than five-and-a-half months in all areas.

Within the 10-fish daily combined rockfish, cabezon and greenling bag limit, the sub-bag limits of one fish each for quillback and copper rockfish, and four fish for vermilion rockfish will continue in 2023. These sub-bag limits have been in effect since January of 2022 and were necessary because new information in 2021 indicated severe declines in the populations of quillback and copper rockfish off California, and recreational vermilion rockfish catch continued to be greater than sustainable harvest limits.

While groundfish fishing seasons will be shorter for nearshore waters and some bag limits are reduced, new opportunities to fish in deeper water beginning in 2023 will allow anglers to target healthy populations of shelf and slope rockfish in deeper waters, like schooling mid-water widow and yellowtail rockfish, or bottom-dwelling blackgill rockfish. Additionally, the sport fishing seasons for some other federally managed groundfish species like sablefish (sometimes called “black cod” or “butterfish”) will be open year-round without depth constraints. Access to these previously closed depths means new experiences for anglers as they explore new habitats, new fishing locations, new target species, and new gear configurations to assemble and deploy.

“Next year is expected to bring a momentous shift in the sport groundfish fishery as all but one of the overfished shelf species that drove management decisions for the better part of the past two decades are now healthy,” said CDFW Environmental Program Manager Marci Yaremko.  “While concerns for quillback and copper rockfish will impact the nearshore fishery in the coming years, there are also a number of new opportunities for anglers, and CDFW looks forward to supporting their development.”

To stay informed of in-season regulatory changes, call the Recreational Groundfish Hotline at (831) 649-2801 or visit www.wildlife.ca.gov/Fishing/Ocean/Regulations/Groundfish-Summary.

Weekend Marine Forecast
Following a breezy mid-week, winds will begin to weaken Friday through the weekend. Friday’s forecast is calling for winds 5 to 10 knots out of the northwest and northwest waves 4 feet at nine seconds and west 5 feet at 14 seconds. Saturday and Sunday are calling for winds up to 5 knots. Saturday waves will be northwest 4 feet at nine seconds while Sunday waves will be from the northwest 3 feet at eight seconds and south 2 feet at 13 seconds These conditions can and will change by the weekend. For an up-to-date weather forecast, visit www.weather.gov/eureka/ or www.windy.com. You can also call the National Weather Service at 443-7062 or the office on Woodley Island at 443-6484.

Tuna Update
Fort Bragg and Shelter Cove were the hot ports the last couple days. Bragg boats found the tuna as close as 20 miles offshore. Scores ranged from the high teens to the mid-30s. The fish are big, too, with a hefty number of 30-pounders coming over the rails. The cove boats had it better, having to travel only 10 to 12 miles to find the right water and fish. The average score was about 30 per boat and mostly a nice grade of fish. A Dorado was also reportedly caught Monday.

The Oceans:
Eureka
According to Tim Klassen of Reel Steel Sport Fishing, Monday’s salmon opener was a little on the slow side. “There were a handful of fish caught over a wide area, didn’t sound like anyone found schools of salmon,” said Klassen. “There were a few caught in the Table Bluff area and down at the Eel River canyon, and a few up north. Just no big concentrations of fish. The water has warmed up north of the canyon, that could have something to do with it. We did find some really good sign between False Cape and Centerville on our way back from the Cape and had a couple quick bites, but nothing stuck. The rockfish bite at the Cape is excellent right now, with a wide variety and a really good grade. The Pacific halibut bite is still going strong, with the best bite coming between the 50 and 54 lines in 200 to 220 feet of water.”

Trinidad
“No big schools of salmon were located out of Trinidad on the opener,” said Curt Wilson of Wind Rose Charters. “There were a handful caught but they are definitely scattered. A few were caught south off the beach in 60 to 100 feet of water. The black rockfish bite is still excellent out front, but Sue-Meg (formerly Patrick’s Point) seems to be the best spot at the moment. A bunch of canary rockfish have shown up as well. The ling cod bite has been a bit tougher lately. Pacific halibut has slowed slightly but is still good for the boats putting in some time.”

Shelter Cove
The Cove was the place to be this week for Tuna reports Jake Mitchell of Sea Hawk Sport Fishing. “There was a good bite on Monday straight out 10 to 12 miles. The boats that ran averaged about 30 tuna each. We boated a quick 25 then went rock fishing, which is still really good. Still a few Pacific halibut being caught when conditions allow you to get to Gorda. Salmon fishing is still very slow. We dedicated a whole day to it last Thursday and only ended up with two fish for the day.”

Crescent City
According to Britt Carson of Crescent City’s Englund Marine, Monday’s salmon opener was very slow. “I only heard of a handful of fish caught but it was just one day,” said Carson. “Hopefully they are out there somewhere. The Pacific halibut bite has been on fire this week. We’ve weighed in some big ones in the past few days, including some weighing 70 and 80 pounds. Most of the boats are targeting the halibut south of the South Reef. The rockfish action is steady, with limits coming easily. Lings are a little harder to come by. A few California halibut have been caught this week at South Beach.”

Brookings
Fishing remains decent for Pacific halibut out of Brookings, but slow for salmon reports Andy Martin of Brookings Fishing Charters. “A few nice kings were caught last week, but overall catch rates are poor for salmon,” said Martin. “Lingcod and rockfish action has been good, with limits of both for charter boats. Sport crabbing is decent in the Chetco estuary. Several boats ventured offshore for tuna last week without success.

The Rivers:
Lower Klamath
There doesn’t seem to be a lack of fish milling about the estuary, but the bite has been pretty tough. The water is extremely warm, which is likely one of the factors.  There are a few being caught on the tides daily, it’s just not red-hot. It will likely be this way until we see the first big push of fall salmon enter the river. Spring-run regulations are in effect through Aug. 14, with a daily bag and possession limit of one salmon of any size.

Lower Rogue
According to Martin, salmon fishing has slowed on the Rogue Bay, but expect action to heat up again any time as August is the peak season. “Water temperatures are in the lower 70s near Agness, forcing kings to hold up in the bay. Fishing was good early last week, but the lull in the action over the weekend continued through Monday.” Donovan Scott from Scottsdale Arizona was all smiles after landing a nice Albacore tuna on Monday while fishing out of Shelter Cove with Jake Mitchell (pictured right) of Sea Hawk Sport Fishing.