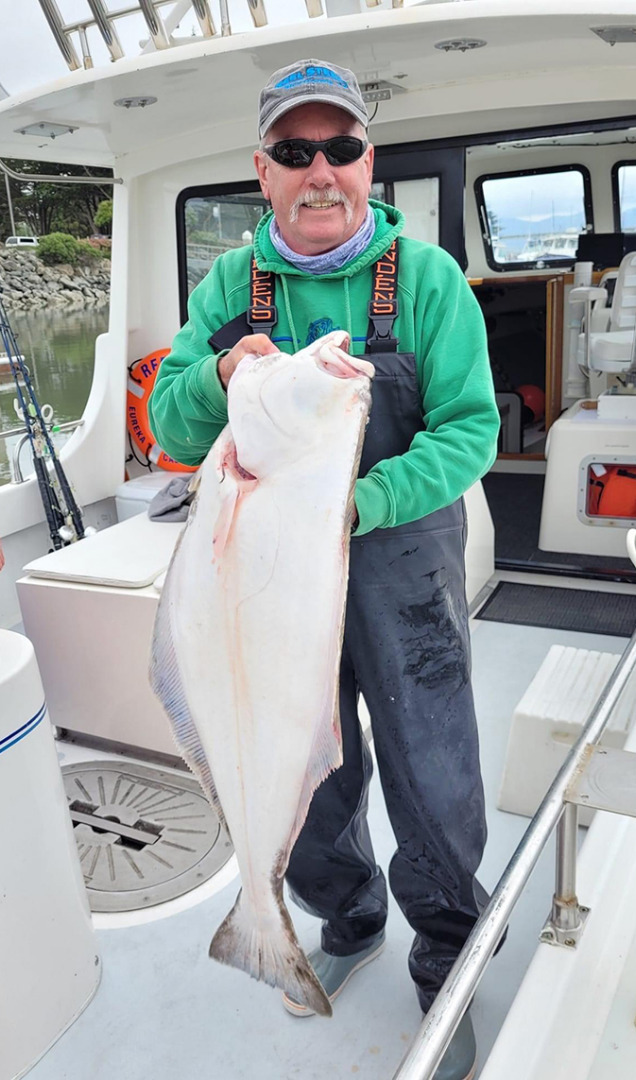 Fortuna resident Craig Smith landed a nice Pacific halibut last Wednesday while fishing aboard the Reel Steel out of Eureka. Prior to the wind picking up over the weekend, the halibut fishing was red-hot out of Eureka and Trinidad.
Photo Credit: Photo courtesy of Craig Smith

Halibut continues to be the focal point out of both Eureka and Trinidad after another week of sizzling action. Eureka charter and sport boats fishing a few miles on each side of the entrance in 250 to 300 feet of water reported quick limits. The Trinidad boats have done equally as good straight out of the harbor. And it’s looking like the only thing that will slow down the onslaught is if you can’t get to the fishing grounds. And that’s exactly what happened when the wind picked up Sunday. But that could be a blessing in disguise. The 38,740-pound quota has the potential to get chewed up quickly with the fleet consistently putting halibut in the box. Best case scenario would be for the quota to last at least through July when the salmon season opens back up Aug. 1. And the way our weather pattern is shaping up, the wind may just see to it. Through June 12, the California Department of Fish and Wildlife has projected 5,473 pounds have been caught. To track the quota, visit https://wildlife.ca.gov/Conservation/Marine/Pacific-Halibut#31670772-in-season-tracking.

Weekend marine forecast
Gusty conditions will be prevalent throughout the week, but should improve by the weekend. As of Tuesday afternoon, Friday’s forecast is calling for north winds 5 to 15 knots and waves north 10 feet at nine seconds. Saturday’s forecast is calling for northwest winds up to 5 knots and waves northwest 6 feet at eight seconds. The winds will decrease Sunday, coming from the southwest up to 5 knots. Waves will be northwest 4 feet at eight seconds. These conditions can and will change by the weekend. For an up-to-date weather forecast, visit www.weather.gov/eureka/ or www.windy.com. You can also call the National Weather Service at 443-7062 or the office on Woodley Island at 443-6484.

Freshwater Lagoon trout plants
According to the California Department of Fish and Wildlife website, Freshwater Lagoon has been planted with trout almost weekly since early May. Reportedly, the fishing has been excellent this month for keeper-sized rainbows. Freshwater is open to fishing year-round and the limit is 5 trout per day and 10 in possession. For more information, visit www.nrm.dfg.ca.gov/FishPlants or call (530) 225-2146.

Fish Lake Kid’s fishing derby this Saturday
The 46th annual Kid’s Fish Lake Fishing Derby is taking place this Saturday, June 25 in Orleans. The derby starts promptly at 8 a.m. and runs until noon. It’s open to kids from Pre-K to the 8th grade. Poles and tackle will not be provided and an adult must accompany all children. Hot dogs and lemonade will be provided; adults are encouraged to bring a side dish or salad to share. The Orleans Rod and Gun Club, Six Rivers National Forest, Coast Central Credit Union, CA Deer Assoc., RMI Outdoors, AmeriCorps Watershed Stewards, and Our River Community host the event. For more information, contact Eric Fieberg at orleansrodandgun@gmail.com or 707-951-4453.

The Oceans:
Eureka
The boats left the Pacific halibut biting Saturday after being chased off the water due to the forecast of high winds and rough seas. And those conditions will continue through at least Thursday. According to Tim Klassen of Reel Steel Sport Fishing, the Pacific halibut bite is still really good. “The fish are a little better grade this year, we’re seeing a lot of them in the 30-to-50-pound range,” said Klassen. “Boats are still having to deal with black cod, but if you can keep a bait on the bottom, your chances of catching a halibut are good. Cape Mendocino is providing excellent rockfish action as usual. There’s lots of variety, you can catch 8 to 10 different species on any given day. The ling cod bite isn’t as wide-open, but you can get limits if you put in the time.”

Trinidad
Rough water kept the charter boats close to port the last few days, but conditions should improve towards the end of the week. Curt Wilson of Wind Rose Charters reports the Pacific halibut bite is still raging. “Limits are pretty much the norm, with most coming straight out in roughly 250 feet of water,” said Wilson. “The rockfish bite continues to be really good, with lots of black rockfish being caught. The ling bite has also picked back up. The crabbing slowed down over the weekend.” added Wilson. Dungeness crab season using hoop nets and crab snares is open through July 30.

Shelter Cove
“Salmon fishing is still very slow with only a handful caught this week,” said Jake Mitchell of Sea Hawk Sport Fishing. “There isn’t much bait around and the water is clear blue in every direction. The rockfish bite is consistently good with limits the norm. The Hat and Ranch House are two of the better spots. I only heard of a couple halibut caught this week.”

Crescent City
“When the boats can get out, which hasn’t been the case the last few days, there are Pacific halibut to be had,” said Britt Carson of Crescent City’s Englund Marine. “Most boats are fishing the South Reef in roughly 250 feet of water. Quite a few were caught last week, with fish all the way to 40 pounds. The rockfish action is still red-hot, with easy limits coming to those who put in the time. And you don’t need to go far, especially if it’s rough. There’s plenty of good spots outside the harbor going towards Castle Rock. A few more California halibut were caught this week. Some of the guys trolling South Beach who know what they’re doing are catching a few.”

Brookings
“The ocean salmon season opened on Saturday out of Brookings, with anglers allowed to keep two hatchery coho a day,” said Andy Martin of Brookings Fishing Charters. “Wild or hatchery kings may be kept as part of the two-fish bag limit beginning this Saturday. Charters averaged a keeper coho per rod over the weekend and released numerous wild coho and kings. Plenty of bait in close has anglers excited about the king opener. Fishing has been good for lingcod and rockfish on calm weather days.

Lower Rogue
A few salmon are being caught daily in the Rogue Bay, with fishing also decent upriver reports Martin. “Hot weather inland this week should boost water temperatures in the bay and improve estuary trolling. Dredge operations are under way in the Rogue Bay.”