Reconnecting at the Salmon Restoration Federation Conference in Santa Cruz 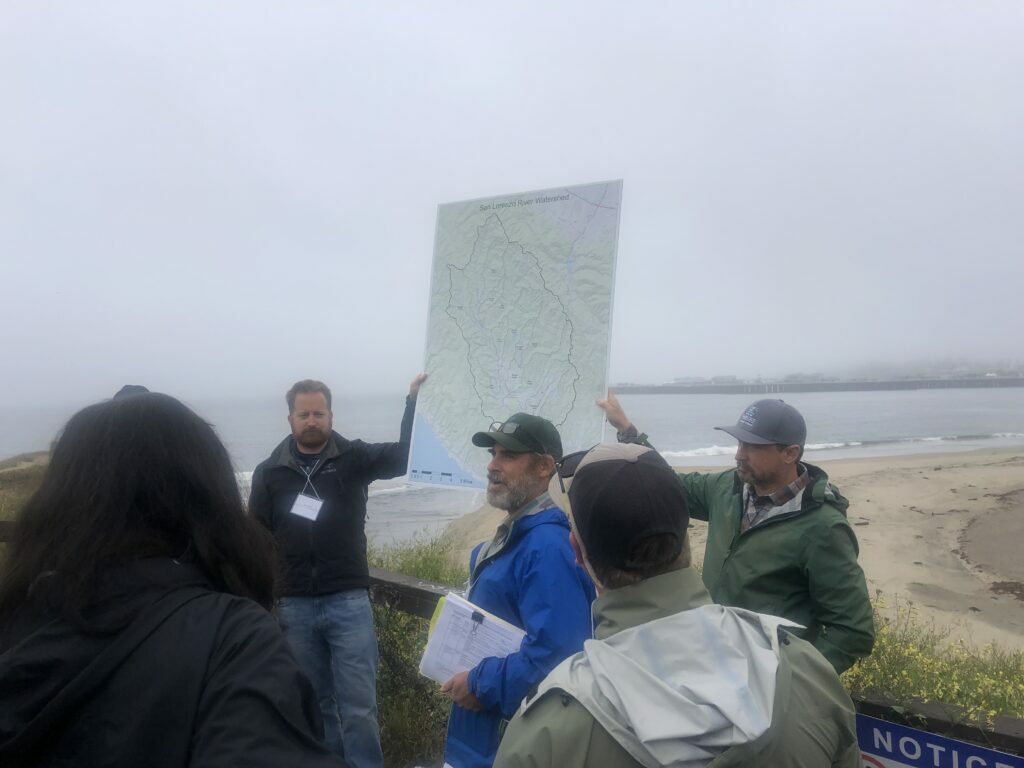 After a two-year delay brought on by the COVID-19 pandemic, the Salmonid Restoration Federation was at last able to hold its 39th annual meeting in-person from April 19-22 in Santa Cruz, California. The theme of “Reconnecting with Resilience” was applicable to both the fisheries professionals in attendance as well as the fish we study, as many of us gathered with our colleagues en masse for the first time since the pandemic began. Several relevant fisheries issues were reflected in the host city’s own waterway, the San Lorenzo River, which was the focus of a conference tour. Historical challenges such as logging and industrial tanneries have given way to present-day issues of leaky legacy septic systems, the 2020 CZU Fire in the watershed, and a growing unhoused population along the river. However, many positive developments include a forthcoming novel culvert structure to safely regulate the level of the river lagoon for both fish and people, as well as restoration projects to remove fish passage barriers with the help of willing landowners. Several other local watersheds also featured in the conference tour lineup, including Butano and Pescadero creeks, Scott Creek, and the Carmel River, with a focus on fish passage at Los Padres Reservoir.
The conference plenary opened with Brook Thompson, a Stanford engineering master’s student who is a member of the Yurok and Karuk tribes. Thompson described her experience of growing up along the Klamath River with a deep practical and cultural connection to salmon, the devastating impacts of the 2002 fish kill on the Klamath, and the continuing economic and mental health consequences for the tribes in the absence of a healthy salmon fishery. The word “Yurok” translates to “downriver person,” Thompson said – and at some point, we are all downriver people. She was followed by Jeffrey Mount of the Public Policy Institute of California, who spoke about adapting to increasing drought intensity. He described emerging understanding around the role of evaporative demand in exacerbating drought, in which a combination of a warmer, dier, and windier climate functions to extract moisture from the land into a “thirsty” atmosphere. He also highlighted management strategies for treating the environment as a partner rather than a constraint to push against. These included a shift to ecosystem-based management and the development of water budgets for the environment, as well as proactively creating decision trees that outline actions to be taken during drought conditions.
Sean Hayes of NOAA’s Northeast Fishery Science Center opened his plenary talk with the provocative title of “Southern Salmon Restoration: Why Bother?” One reason to bother, he expressed, is that lessons learned trying to manage salmonids struggling at the warming southern extent of their range could benefit salmon elsewhere in the future. And while there is value for scientists to shift focus from single-species management towards a more ecosystem-based approach, Hayes noted that the stories of single charismatic species like salmon can play a valuable role in helping to inspire the public without overwhelming them. He also presented the “Resist-Accept-Direct” framework for resource management in the face of climate change, which offers the possibility of actively managing toward preferred new conditions, rather than only attempting to restore ecosystems to past conditions. The final plenary speaker was Margaret Spring from the Monterey Bay Aquarium, who shared results from a collaboration with NOAA to attach pop-up satellite tags to steelhead kelts migrating to the ocean, which revealed that steelhead from Scott Creek stayed close to the California coast, while those from the Situk River in Alaska made a wide-ranging migration along the Alaskan peninsula. She also shared a project from the Monterey Bay Aquarium Research Institute that paired a robotic eDNA sampler called the Environmental Sampler Processor (ESP) with steelhead and coho salmon population monitoring in Scott Creek to explore the potential of the ESP to monitor freshwater health.
FISHBIO gave two presentations at the conference. In a session on salmonid life-history variation, we presented our recently published paper that uses data from the Stanislaus River as a case study to highlight the challenges associated with monitoring steelhead and rainbow trout (Oncorhynchus mykiss) in the Central Valley. The paper emphasizes the need for targeted monitoring of all life-history forms of this highly variable species, including the often overlooked resident rainbow trout. In a session on managing non-native predatory fish in salmon-bearing streams, we shared three years of diet and demographic data on black bass (Micropterus spp) and striped bass (Morone saxatilis) from the Native Fish Plan project on the Stanislaus River. Our results revealed that Pacific lamprey (Entosphenus tridentatus) are an under-appreciated prey item for these nonnative species, which also consume juvenile Chinook salmon. These species also have divergent population dynamics, meaning that different strategies will be needed to effectively manage them. Other sessions at the conference ranged from mountain headwater streams to the dynamic conditions of the ocean, covered emerging artificial intelligence and eDNA technologies to monitor samonids, and explored how to protect fisheries in an ongoing drought. The opportunity to reconnect after so long was revitalizing for many conference attendees, and will be a boon to continued efforts to study, protect, and restore salmon and trout throughout California.