Nothing Ventured, Nothing Gained: Risks And Rewards Of Lagoons For Rearing Steelhead 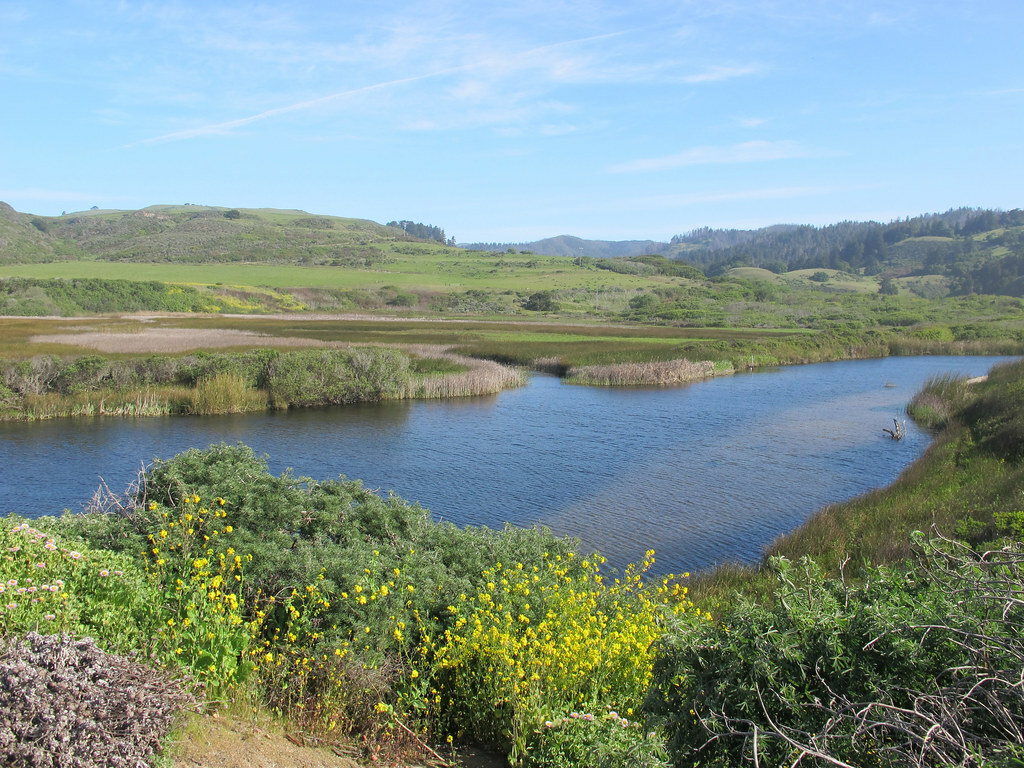 The ocean is the ultimate destination of water flowing through coastal streams, but in some cases it may make an extended pit stop in a seasonal lagoon. A lack of rain and low flows during summer months combined with ocean wave action can build up a sandbar at the mouth of a river, thereby forming what is known as a bar-built estuary. This seasonal barrier means migratory fish like steelhead (Oncorhynchus mykiss) living in such streams have to wait for winter storms to carve them a path to the ocean. Far from being a prison, the lagoon provides valuable rearing habitat for young steelhead as they prepare to head out into the big blue. However, many questions remain about how these fish make use of the productive habitat without suffering from the harsh environmental conditions that are characteristic of lagoons. In an effort to get some answers, scientists from the National Marine Fisheries Service in Santa Cruz monitored water quality and steelhead movement in a small coastal estuary in northern California across a season of lagoon closure (Bond et al. 2021). Their findings recently published in the journal Estuaries and Coasts suggest that young steelhead moved throughout the system strategically to maximize their growth while limiting their exposure to the challenges of fluctuating temperature and salinity.
Nearly half of the coastal rivers in California experience seasonal sand bar formation. After this closure occurs, the estuary progresses through a series of ecological states. Changes in water chemistry combined with warmer water temperatures create a dynamic habitat that is both high-risk and high-reward for young steelhead. Weekly growth rates in the summer and fall may be between six and 17 times higher for juveniles rearing in lagoons as compared to those rearing in upstream habitats. The researchers in this study focused on steelhead living in Scott Creek estuary in Santa Cruz County, a system typical of small, coastal California watersheds. They monitored the lower 1.5 kilometers (~0.9 miles) of the creek through a full season of lagoon closure from June–November 2018, and collected data on temperature and salinity from upstream to downstream, as well as from the water’s surface to its bottom. In addition, they sampled fish twice per month and implanted captured individuals with passive integrated transponder (PIT) tags. Recapturing tagged individuals allowed for estimates of abundance and growth, and the detection of fish at three antenna arrays placed throughout the study area helped shed light on when and where the fish were moving.
Analysis of the resulting data revealed that when ocean waves washed into the lagoon, this input of seawater caused the lagoon to stratify into a warm, salty, oxygen-poor bottom layer topped by a cooler, fresher surface layer. While this salty layer persisted (during roughly the first half of the lagoon closure period), fish were likely restricted to the top meter of the water, thereby reducing the amount of available lagoon habitat by 40%. In spite of these challenging conditions, high steelhead abundance and high growth rates were observed in the lagoon for all but the very end of the study period. Analysis of data from the antenna arrays suggested that most fish moved upstream to the middle or upper lagoon at dawn, and downstream to the lower lagoon at dusk. This general pattern was observed for the entire study, and likely allowed steelhead to make use of the rich resources in the more open and exposed lower lagoon while avoiding the risk of predation from birds and periods of poor water quality during the day. Very few fish moved completely out of the lagoon into the upstream riverine portion of the creek until very late in the study, right before the first rainfall event.
Given the dynamic conditions observed, the researchers inferred that variation in hydrology and water chemistry may lead to different patterns in fish habitat use and behavior from year to year. The high growth rates and abundant juvenile population observed in the lagoon suggest it provides valuable rearing habitat for young steelhead. However, the bar-built estuaries of Coastal California may be particularly vulnerable to climate change. Increasingly erratic, extreme climatic events may shift the seasonal formation and duration of lagoons, and may also diminish the quality of habitat provided. Understanding how juvenile steelhead use these dynamic habitats will be vital to predicting changes and adjusting management as climate change progresses.