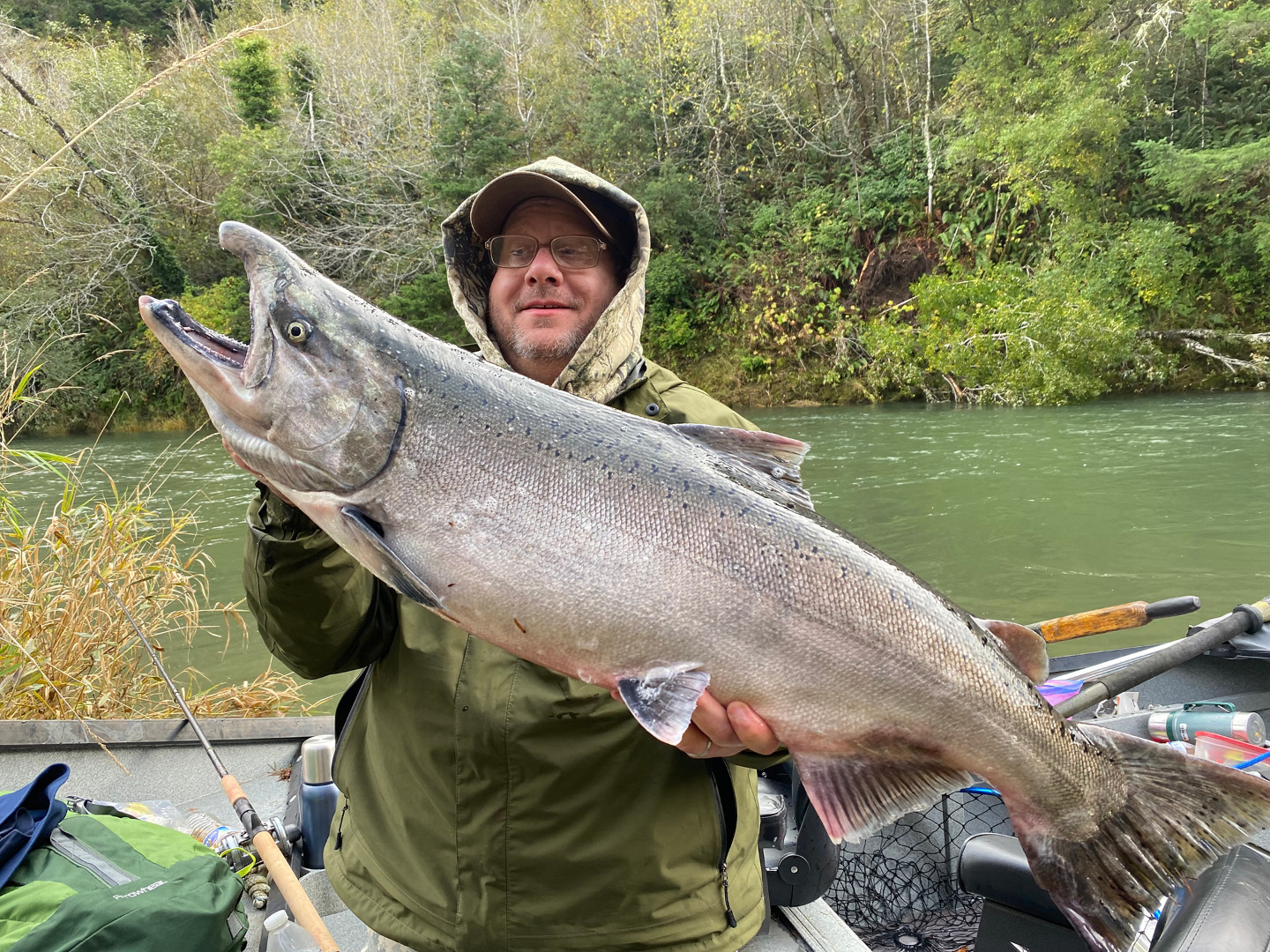 The surge in flows brought by the atmospheric river in late October was a blessing in so many ways. It put an end to another horrible fire season, began to fill our parched reservoirs, and created perfect river conditions for the late-run fall king salmon to make their way from the Pacific to their spawning grounds. On the flipside, it washed away hopes of a prolonged salmon season for us anglers. The Smith, Chetco, and Eel are all on the tail end of the runs that would typically still be going strong. Me personally, I’ll take an atmospheric river event any day if it means three to four years down the road our rivers will once again see healthy returns of salmon. So, as the salmon are taking care of business in their home tributaries, we’ll sit back and wait for signs of the impending winter steelhead run and know our salmon future looks a little brighter.

Weekend weather and marine forecast
According to Alex Dodd of Eureka’s National Weather Service office, we do have some rain in the forecast, but nothing significant. “We should see a small system move in Thursday evening, with showers lingering into Friday. Rainfall totals will be from a quarter to a half inch,” he said. “After that, we’re looking dry through the weekend and into early next week. There’s a chance we’ll see a weak system arrive next Wednesday or Thursday.”

The weekend marine forecast is looking decent for offshore crabbing and possibly rockfish. As of Wednesday, Saturday’s forecast is calling for north winds 5 to 15 knots with northwest waves 8 feet at 10 seconds. Sunday is looking similar, with winds coming out of the northeast up to 5 knots with northwest waves 5 feet at 10 seconds. These conditions can and will change by the weekend. For an up-to-date weather forecast, visit www.weather.gov/eureka/ or www.windy.com. To monitor the latest Humboldt bar conditions, visit www.wrh.noaa.gov/eka/swan. You can also call the National Weather Service at 443-7062 or the office on Woodley Island at 443-6484.

The Oceans
Eureka
The Pacific halibut season came to a close Monday, and the fishing was good right up to the end. Tim Klassen of Reel Steel Sport Fishing spent a few hours on the halibut grounds getting limits for his crew. “The fish were all in the 15 to 18- pound range,” said Klassen. “It was a good way to end the season. The all-depths rockfish season has offered some good fishing too. We’ve been out a few days and had limits of mostly canaries and yellowtail, but the lingcod have been hard to come by. The crabbing has been very good. The crabs are a nice size, and they’re pretty full. On an overnight soak, pots are averaging 13 to 15 keepers in 80 to 120 feet of water.”

Shelter Cove
According to Jake Mitchell of Sea Hawk Sport Fishing, limits of rockfish, lingcod and crabs were fairly easy to come by this week. “The crabs aren’t huge, but they’re nice and full,” he said. “We fished a couple days up at Rodgers break and the rest down off Bear Harbor. Both locations produced really easy rockfish limits, but we had to work a little harder to get our lingcod.”

Brookings
“Nice weather over the weekend allowed Brookings boaters to venture across the bar for the first time in nearly a month,” said Andy Martin of Brookings Fishing Charters. “Lingcod fishing was fair, but rockfish action was wide open in the Twin Rocks and House Rock area. Rougher weather returned on Monday and is expected through the week. Sport crabbing opens in the ocean off of Oregon on Dec. 1. Surfperch fishing has been slow.”

Mad River Steelhead Derby to start Dec. 18
The Nor-Cal Guides and Sportsmen’s Association (NCGASA) is hosting its third annual Mad River Steelhead Derby from Dec. 18 through Feb. 28. Anglers must be signed up prior to Dec. 18 to be eligible to win cash and prizes. Only hatchery steelhead can be entered. The largest steelhead wins $500, second place $300 and third place $150. First place in the youth division (16 and under) will win a $175 RMI Outdoors gift card, second and third place finishers will win prizes TBA. Anglers can sign up online at www.ncgasa.org or in person at RMI Outdoors. Part of the proceeds benefit the Mad River Steelhead Stewards volunteer angler’s broodstock collection program that works in concert with the California Department of Fish and Wildlife. For more information, visit www.madriversteelheaderby.com

The Rivers:
As of Friday, all North Coast rivers subjected to low-flow fishing closures, including the Smith, Eel, South Fork Eel, Mad, Redwood Creek and Van Duzen are open to angling. Be sure and call the low-flow closure hotline at 822-3164 to determine if the river is open prior to fishing. The California Department of Fish and Wildlife will announce whether rivers will be open by a telephone recorded message each Monday, Wednesday and Friday.

Mad
The Mad saw a slight bump in flows following Monday’s rain. Will be dropping the rest of the week and should be at a fishable level by the weekend.

Main Eel
The river is in perfect shape, but there aren’t many fish around. The bulk of the run has made their way upriver, but a few kings should trickle in. Conditions look good through the weekend.

Van Duzen
Was down to 327 cubic feet per second on Friday. Will be low and clear until the next rain.

South Fork Eel
Was in perfect shape last weekend, but only a handful of kings were caught. Some coho have started to show. Will also be low and clear through the weekend.

Smith
The Smith has been running low and clear, but did receive a bump in flows following Monday’s rain. Another slight increase is forecast for Friday, but the river will likely remain clear. The fishing has been very tough, with not many fish moving into the system. The fish that are being caught have been nice ones. Fishing pressure has been very light.

Chetco
Salmon season is already tapering off on the Chetco, as the prolonged high water allowed much of this year’s run to shoot upstream to spawn reports Andy Martin of Wild Rivers Fishing. He said, “Fishing has been fair at best since the river dropped back into shape the end of last week. Salmon will continue to trickle in each day, but with higher flows, those fish may not spend much time in the lower river. Some nice kings have been caught, with a few topping 50 pounds reported last week.”

Elk/Sixes
According to Martin, the Elk and Sixes fished well early last week while the Chetco was blown out. “Decent numbers of hatchery fish moved into the Elk, where wild kings must be released. The Sixes has been a good bet as well. Both rivers can be tough to fish during lower flows, as expected this week. Salmon season is finished on the Rogue, while steelhead have yet to arrive. Except for a few half-pounders in the Agness area, the Rogue is slow. Expect winter steelhead to arrive by mid-December.”