Rainbow Connection: ﻿Anadromy, Residency, And Barriers To Steelhead In The Eel River 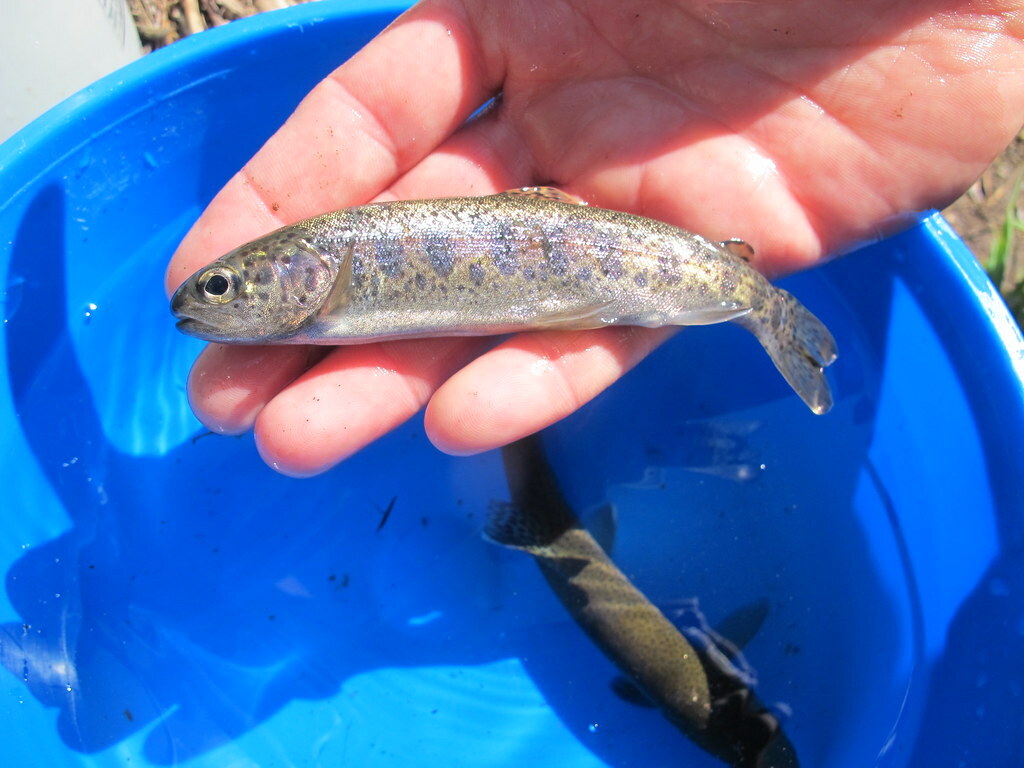 Flexibility is a superpower for the fish Oncorhynchus mykiss, which can live in freshwater as a resident rainbow trout, or migrate to the sea as an anadromous steelhead. This power of options makes the species more adaptable to uncertain environments, but has also made understanding O. mykiss populations difficult. There is much uncertainty surrounding the relationships between resident and anadromous (or ocean-migrating) individuals, and what causes fish to express these different life histories. In an effort to better understand these adaptable fish, researchers in northern California examined the distribution of anadromy and residency among O. mykiss in the Eel River drainage (Harvey et al. 2021). Although no clear relationships were found between the expression of anadromy and stream size or distance from the ocean, the observed distributions of offspring from both resident and anadromous females in relation to migration barriers have important implications for management.
Rainbow trout and steelhead commonly live side-by-side in the same streams, but the potential pathways that a young O. mykiss may take are far more varied than these simple categories. Even among steelhead, there are various patterns in the age at which fish first enter the ocean, the age at which they return to freshwater, and the number of times an individual will reproduce. Understanding the factors that influence this flexibility is critical for prioritizing conservation actions, and past studies have found relationships between the expression of anadromy and stream size, as well as stream distance from the ocean, which the present study investigated further. The presence of barriers to migration is another factor that can affect whether fish migrate, and researchers of this study sought to determine whether supposed barriers in the Eel River system truly were blocking migratory steelhead.
To obtain the data necessary to answer these questions, juvenile O. mykiss were collected from 52 sites throughout the Eel River drainage that covered a range of distances from the ocean and stream sizes, and were also distributed both above and below suspected barriers to migration. Fish were captured using electrofishing, and their ear bones – or otoliths – were collected for analysis. As fish grow, they develop new layers on these bones that are similar to growth rings in a tree, and analysis of the chemical composition of these rings can provide information on the life history of the individual, as well as that of its mother. In this case, the researchers sought to determine whether the mother of each captured fish was a resident rainbow trout or a migratory steelhead.
In total, they analyzed otoliths from 91 fish collected below suspected barriers to migration, and 15 fish collected above these barriers. Notably, however, one of the above-barrier fish was found to have an anadromous mother that must have crossed the barrier, suggesting that this assumed barrier may in fact be passable by steelhead under certain conditions. Among the below-barrier fish, 61 were the offspring of anadromous mothers and 30 were the offspring of resident mothers. Although it is not possible to know for sure whether these juveniles themselves would have become anadromous or resident fish, the abundance of juveniles produced by resident rainbow trout in waters that are accessible to steelhead suggests that residents may be playing a significant role in sustaining the population as a whole. Efforts to model the relationship between the presence of anadromous offspring and distance from the ocean as well as stream size failed to detect any relationships, but the presence/absence of prospective barriers was found to be a strong predictor in the expression of anadromy, with anadromous offspring being far more common in stream reaches below barriers.
This study showed that determining what is and is not a true barrier to a steelhead can be tricky. And while most studies of anadromy in O. mykiss populations focus on the potential of anadromous individuals being produced upstream of barriers, this study demonstrates that resident rainbow trout below barriers are also important to consider as a potential source of steelhead offspring. Given that resident O. mykiss have been shown to contribute considerably to steelhead populations, their presence in habitats that are accessible to steelhead may play a vital role in sustaining the population as a whole. As such, managers may need to focus on creating suitable habitat conditions not only for spawning steelhead and outmigrating smolts, but also for the resident and juvenile O. mykiss that remain in freshwater year-round.