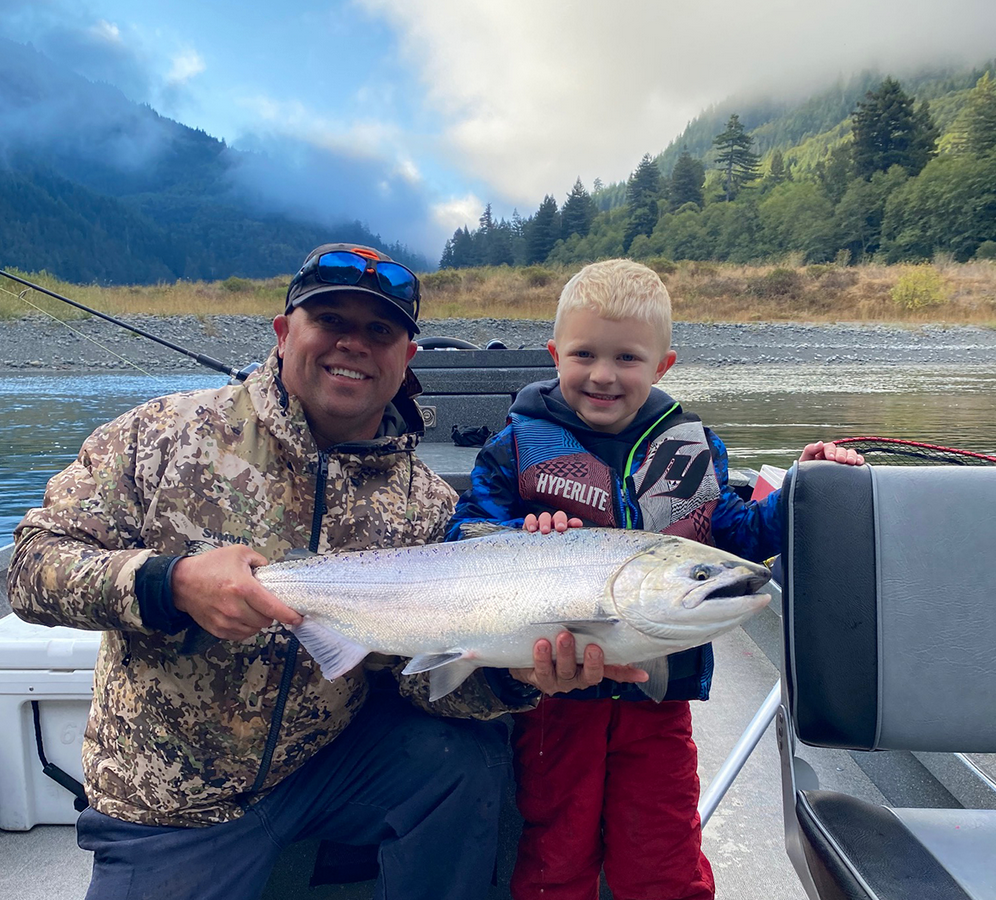 Six-year-old Rylan Angeli, along with the help of father Nick, landed this nice king salmon on a recent trip to the Klamath River.
Photo Credit: Photo courtesy of Jeff Griffith

Salmon fishing on the lower Klamath continues to roll on. Fresh schools of jacks (2-year-old males) as well as adults are arriving just about daily. Anglers fishing from the Glen up to Johnson’s are finding fresh fish side-drifting riffles and dragging roe through the deep slots. The rain over the weekend bumped the flows just enough to really put the fish on the move and the fishing was wide-open from top to bottom. And the numbers from California Department of Fish and Wildlife provide plenty of evidence. For the week ending Sept. 16, a whopping 886 jacks were harvested above the U.S. Highway 101 bridge. During the same week, more than 1,000 adults were released along with another 264 jacks. Those are some pretty impressive catch rates. The lower Klamath adult salmon quota was met Sept. 7, but anglers can still keep two jacks (less than or equal to 23 inches) per day with a possession limit of six. You may still fish for adult Chinook salmon in other sections of the Klamath Basin, including the main stem of the Klamath River above Weitchpec and the entire Trinity River, until their quotas are met. Anglers may keep track of the Klamath and Trinity river quotas by calling (800) 564-6479.

Upper Klamath, Trinity salmon quota update
The upper Klamath and Trinity quotas don’t have closure dates as of yet according to Dan Troxel, an environmental scientist on the Klamath River Project. “Typically, the quotas are based off harvest timing, meaning a set number of days following the closure of the lower Klamath to retention of adult salmon,” said Troxel. As of now, the Upper Klamath will allow for adult harvest likely through the first week of October. As for the Trinity River, we’re seeing lots of fish at the Willow Creek Weir, so the adult harvest closure date will need to be discussed further. Additionally, the Lower Trinity sector is partially informed by the recreational creel survey conducted by Hoopa Valley Tribal Fisheries. At this point, no formal updates have been provided to CDFW, however effort and catch is reported to be pretty minimal in their survey area. An increase in fishing effort is likely to occur with the lifting of National Forest closures that have been in place, so things should change for the better for anglers in the near future.

Weekend marine forecast
Ocean conditions are expected to be plenty fishable by the weekend. As of Tuesday, the forecast out 10 nautical miles for Friday is calling for winds out of the west up to 5 knots with northwest swells 5 feet at 11 seconds. Saturday is calling for winds from the northwest up to 5 knots and northwest swells 3 feet at seven seconds and west 6 feet at 18 seconds. Sunday the winds will be from the west up to 5 knots and west swells 6 feet at 13 seconds. These conditions can and will change by the weekend. For an up-to-date weather forecast, visit www.weather.gov/eureka/ or www.windy.com. To monitor the latest Humboldt bar conditions, visit www.wrh.noaa.gov/eka/swan. You can also call the National Weather Service at 443-7062 or the office on Woodley Island at 443-6484.

Pacific halibut quota update
The CDFW has projected 26,118 net pounds of Pacific halibut has been harvested through Sept. 12. In 2021, the Pacific halibut allocation for California is 39,260 pounds. The Pacific halibut fishery will run through November 15, or until the quota is reached, whichever is earlier. To view the latest catch projection information, visit www.wildlife.ca.gov/Conservation/Marine/Pacific-Halibut#31670772-in-season-tracking

The Oceans:
Eureka
The rough ocean kept the boats off the water over the weekend and through Monday. Friday, the Pacific halibut fishing was pretty good for the Eureka fleet. According to Tim Klassen of Reel Steel Sport Fishing, the bite was in the same general area, just north of the entrance in 250 feet of water. “The fish are still on the small size, ranging from 10 to 30 pounds,” he said. “Boats were back on the water Tuesday fishing in pretty rough conditions.. The fish are definitely still there and some boats were able to get limits.” The rockfish and lingcod bite at the Cape has been good according to Tony Sepulveda of Shellback Sport Fishing. “We’ve been seeing a good grade of lingcod up to 30 pounds and a nice variety of rockfish,” he said.

Shelter Cove
The salmon fishing has slowed down out of the cove, according to Jake Mitchell of Sea Hawk Sport Fishing. We had four salmon on Wednesday but haven’t boated one since,” he said. “There were a few caught on Thursday as well, but I haven’t heard of any landed since then. The rock fishing has been excellent with limits of rockfish and lingcod every day. We made it up to Rodgers break one day and spent the rest of the week off the Ranch House for the rockfish.”

Crescent City
According to Britt Carson of Crescent City’s Englund Marine, rough ocean conditions had the boats tied up over the weekend. “Late last week, a few Pacific halibut were still being caught and the rockfish bite was still going strong.” The tuna water was within 35-40 miles as of Tuesday and a few boats made the run. Top boat put in 51 albacore. Ocean conditions look good for the next few days.

The Rivers:
Lower Klamath
Salmon fishing remains excellent for both jacks and adults on the lower Klamath. Side-drifting roe in the riffles and dragging roe through the deeper holes are both producing fish from the Glen to Johnson’s. Fresh fish are coming into the lower river just about every day. Anglers can keep two jacks (less than or equal to 23 inches) per day with a possession limit of six.

Lower Rogue/Coos
According to Martin, the Chetco estuary fished well last week, but was slow over the weekend, as the slight rise in flows was enough to draw the kings holding near the jetties upriver. “Muddy water and rough bar conditions also made trolling rough,” said Martin. “Kings continue to be caught on the Rogue Bay, but the season is quickly winding down. Wild coho can be kept on the Coos, where fishing is decent for them, but slow for kings.”