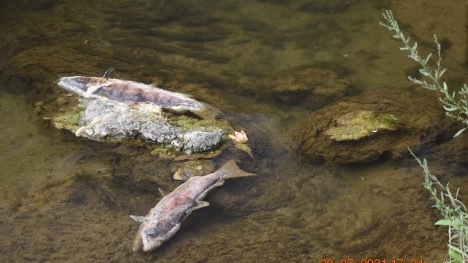 Some have questioned whether or not trucked fish return to their birth stream.  In the case of fish from the Coleman Hatchery, located hundreds of miles up the Sacramento River, the answer is that if hatchery fish are trucked to the Delta or Bay, they’ll return to the Central Valley in substantially higher numbers but most will stray and not find their way back to the hatchery.  GSSA is working with the USFWS to find out if they can be trucked part way and find their way home.

However, in the case of fish born at the Feather River Hatchery or Nimbus Hatchery on the American River, the answer is that trucking increases returns back home.  Commonly, the return of trucked fish to the Feather and American rivers far outnumber fish from the same hatcheries that are released at the hatchery.   Sometimes releasing the trucked fish just a little further west, from Vallejo to Sausalito, can almost double their survival with minimal increased straying.

Fish from the Mokelumne Hatchery sometimes have a hard time finding their way back no matter where they’re released.   This is mostly due to the fish being unable to find Moke water in the fall when the river often runs low and the adjacent Sacramento River is roaring by comparison (when the Delta Cross Channel Gates are open).  Higher Sacramento flows mixing with the Moke at the Delta Cross Channel will often entice Moke fish to stray into the Sacramento.  This isn’t caused by trucking but rather by the way humans operate reservoir releases in the fall when these fish are trying to find their way home.  Closing the Delta Cross Channel Gates greatly helps to reduce that straying, but it doesn’t always happen when needed. Survival, returns, and straying vary from year to year but the overall trend is consistent, which is, you’ll always see more survival and returns to rivers from trucked fish, even after accounting for higher stray rates.

First photo, Feather River in 2017. Second photo Mokelumne River in the fall running low.  If you were a salmon which would you go to?

A little more on what causes returning hatchery fish to stray, with a look at the influence of which reservoirs are being released in the fall and which aren’t.

Astute observers have pointed out for years that fall reservoirs releases, when salmon return, often have more influence on where the fish end up than whether and where they were trucked as babies.

Although fish from the Coleman hatchery can be the exception, due to the nearly 300 miles of Delta and river they need to navigate to get home, there’s an interesting story to tell about them.

Coleman fish that returned in 2017 were mostly born in 2014 and trucked to Rio Vista in the Delta in large numbers in 2015.  Most didn’t return to Coleman.  This has been blamed largely on their being released in the Delta without the benefit of smelling and learning the upper Sacramento River watershed before their truck ride.  However, it’s hard to ignore the influence of the extra water released from Oroville in the summer and fall of 2017, where many of these Coleman fish ended up.

A prominent river guide out of Redding recalls that many Coleman fish piled up at the Thermalito Outlet hole on the Feather River in 2017.  Instead of guiding and fishing the Barge Hole and other upper river spots, he put his whole season in down on the Feather.

This massive return of kings to the Feather River coincided with the emptying of Lake Oroville to do emergency repairs on the spillway that had been badly damaged that spring.

In order to empty the lake, which was full to the brim by one of the wettest winters in many years, the CA Dept. of Water Resources released over 10,000 cubic feet of water per second of water during the summer and into the fall.  In other words, releases from Lake Oroville kept the downstream Feather River roaring that entire summer and into fall.

When fall run salmon returned to the Sacramento River, including Coleman hatchery fish, they detoured up into the Feather in response to the huge volume of water hitting them in the snout.

This illustrates that the plumbing, and which faucets are turned on and off, likely plays a big role in where fish return to.  Basically, in 2017, the faucet on the Feather was turned all the way up and the one on the upper Sacramento at Shasta Dam, not as much.   So the fish stacked into the Feather.

This year saw a near-record return of up to 25,000 spring fun king salmon to Butte Creek. These are some of the last truly wild salmon in the Central Valley.  Some have speculated that we got such a strong return for a few reasons including the very wet spring in 2019 when these fish were babies out migrating to the ocean.  Another reason could be the heavy sediment runoff from a fire that burned the Butte Creek drainage in the prior summer.  At the time, there was fear that runoff would bury the incubating eggs and smother them in sediment.  Instead, it looks like the eggs hatched and the additional sediment probably helped hide the fry and smolts in turbid water that washed out of the Central Valley that spring.  What could have been a very big group of spawners this year has mostly died before spawning due to hot water in the creek.  As of early August, state officials estimated that over 14,000 died before spawning.

On the Feather River, CDFW reports that about 5,000 adult spring run were tagged and returned to the river this year.   Roughly 90% of those females were injected with thiamine to offset potential thiamine deficiency issues. The remaining fish that were not injected will be used as a control for research, but the eggs that are spawned from those fish will be treated for thiamine deficiency during fertilization.

Water flows in the river are very low and the water being released through the Oroville Dam is coming out of the “river valve”, which is basically a drain plug in the very bottom of the dam.  This is 47° water and measures in the low to mid 60s downstream, which is good for salmon. However, the fish still have to swim through +70° water in the Sacramento to get to the Feather River, which is a concern.

CDFW believes it will have sufficient broodstock to meet its target of 2 million spring-run, but that depends on what of the tagged adult spring run return to the hatchery when it’s time to collect eggs.