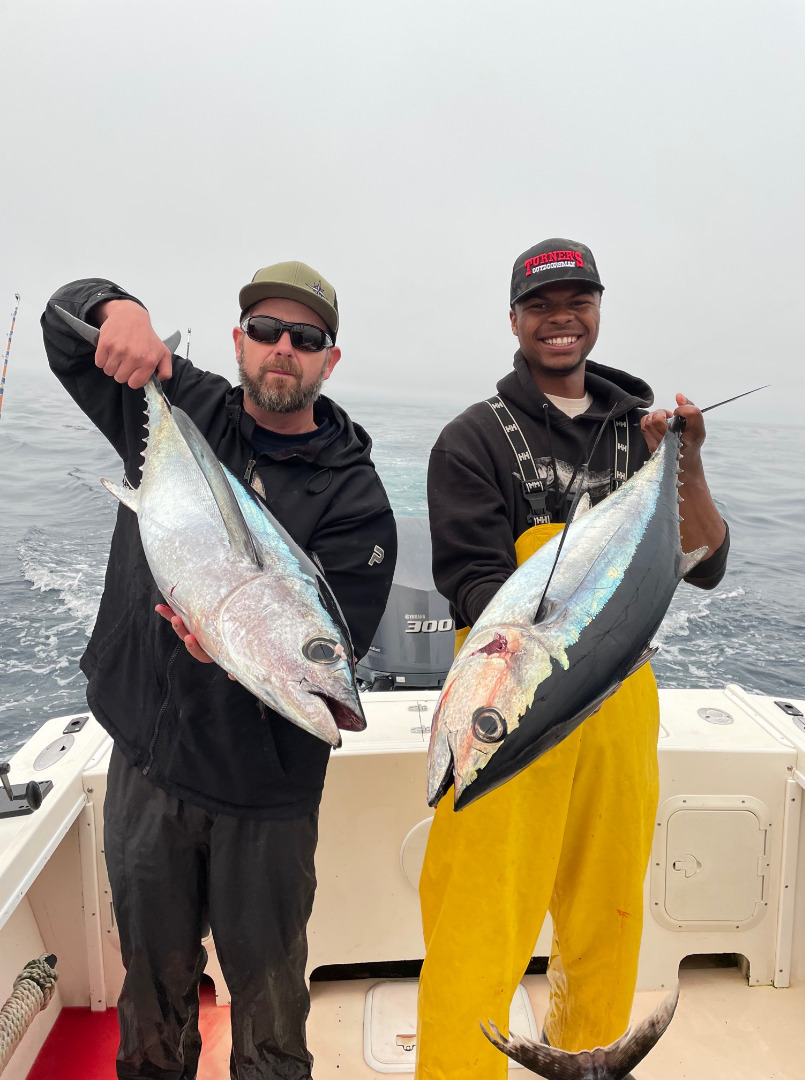 And what an epic bite it was! The onslaught began last Thursday out of Crescent City and didn’t let up until Sunday, when the ocean turned sporty. Fish were caught out of Shelter Cove but the best bite was near Crescent City. Boats leaving Eureka headed northwest to the area off of the mouth of the Klamath River. There was a huge swath of tuna from there north to Brookings. Boats leaving Crescent City met the warm water and boatloads of tuna at 20 miles. The Trinidad boats got in on the action, as well. Tony Sepulveda, of Shellback Sport Fishing, was one of the charters that made the run Friday and Saturday. “Tuna were caught as close as 34 miles northwest of Trinidad,” said Sepulveda. “We did our heavy lifting around 45 miles. The fishing on Friday was ridiculous, with 76 by noon. We had lots of quads, five-ways and even six-bangers. We didn’t have live bait available but did real well sliding colt snipers after the troll rods went off. Saturday was busy but they were a little more tentative. No long dry spells but lots of singles and we ended the day with 37.” Scores were all over the board, ranging from high teens to more than 70 for some boats. A boat fishing out of Brookings even announced a limit of 75 for three anglers by 8:30 a.m. The best way to describe this level of fishing – everyone who went “got all they wanted.” The grade of fish was mixed, ranging from 8 pounds all the way to the high 30s.

Weekend marine forecast
Gale force winds will produce steep seas for most of this week. Friday’s forecast is calling for winds 15 to 25 knots out of the north and north waves 10 feet at 10 seconds. Saturday is calling for north winds 5 to 15 knots and waves out of the northwest 7 feet at eight seconds. Sunday’s forecast is similar, with winds out of the north 5 to 15 knots and waves northwest 7 feet at nine seconds and 3 feet at 11 seconds. These conditions can and will change by the weekend. For an up-to-date weather forecast, visit www.weather.gov/eureka/ or www.windy.com. To monitor the latest Humboldt bar conditions, visit www.wrh.noaa.gov/eka/swan. You can also call the National Weather Service at 443-7062 or the office on Woodley Island at 443-6484.

The Oceans:
Eureka
The tuna water was quite a way from Eureka, but a few boats did make the long 50-plus-mile run. Quite a few of the Eureka boats opted to trailer to Crescent City to get in on the bite from there. The boats that stayed put took advantage of the nice weather and headed to the Cape for rockfish. Tim Klassen, of Reel Steel Sport Fishing, reports the fishing is really good, with easy limits of rockfish. “The blacks are big and plentiful and it’s really easy to catch a quick limit,” he said. “The lingcod were a bit tougher to come by as the wind kept us from getting to some of the better spots, but we did manage to get quite a few.”

Trinidad
Curt Wilson, of Wind Rose Charters, reports the rockfish action is cranking right along, with lots of black rockfish coming over the rails. “Between the Head and Patrick’s Point is still producing quality limits of black rockfish,” he said. “We made a couple trips out to Reading Rock over the weekend and caught a wide variety of rockfish and some nice lingcod. The wind this week may keep us off the water for a few days.” The boat launch is operating from 7 a.m. until 3 p.m.

Shelter Cove
According to Jake Mitchell, of Sea Hawk Sport Fishing, there are still some nice salmon being caught. “It’s not red hot but the average is probably about a fish per angler,” he said. “Some days are better than others as it hasn’t been real consistent. Still lots of bait in close to the harbor and that’s where most of the effort has been. We made our first tuna run on Thursday 57 miles out past Gorda Valley. The grade was pretty small for the most part but there was plenty of action. In five hours of fishing, we boated 55 albacore. Rock fishing was still easy limits with about a lingcod per rod on the days we tried. Most of the rockfish are being caught at the Hat and the Old Man.”

Crescent City
The tuna fishing was wide-open Thursday through Sunday with fish as close as 20 miles. The rockfish and lingcod bite is still going strong at the Sisters and the South Reef. A few California halibut are being caught along South Beach as well as a few Threshers.

Brookings
“Last week was nothing short of phenomenal out of Brookings,” said Andy Martin of Brookings Fishing Charters. “The albacore came within 18 miles and the bite was wide-open, while the Pacific halibut action also was wide-open. We ran eight albacore trips last week on four different charters and averaged 30 fish a day. We could have caught more, but there was no more room or ice. The best catch was 74 fish on the Dash on Friday, with some fish over 30 pounds. Two of our charters caught limits of Pacific halibut on Sunday in around 200 feet of water just north of the border. The biggest halibut was around 45 pounds. Salmon season closed for kings on Sunday, with slow fishing. It remains open for hatchery coho through Aug. 28, but the vast majority of the clipped fish have moved north. Rockfish action is good, while lingcod fishing is fair. Sport crabbing remains slow. Windy weather will sideline the fleet much of this week.

The Rivers
Lower Klamath
The estuary fishery has slowed down as we wait for the fall kings to come in big numbers and make their way upriver. As of Wednesday, there weren’t many salmon being caught above tidewater, but there are plenty of half-pounders and adult steelhead around. Fall regulations went into effect Sunday, Aug. 15. The daily bag limit will be two Chinook, no more than one adult (greater than 23 inches) and the possession limit is six, no more than three adults.

Lower Rogue
After a hit-and-miss week of fishing on the Rogue Bay, the action heated up with some guides getting boat limits Monday and Tuesday, and many getting at least a fish per rod reports Martin. He said, “The bay is fishing in peak-season from. Plain anchovies are working best. Fish are spread throughout the bay. Windy weather could making trolling the bay more challenging this week.”