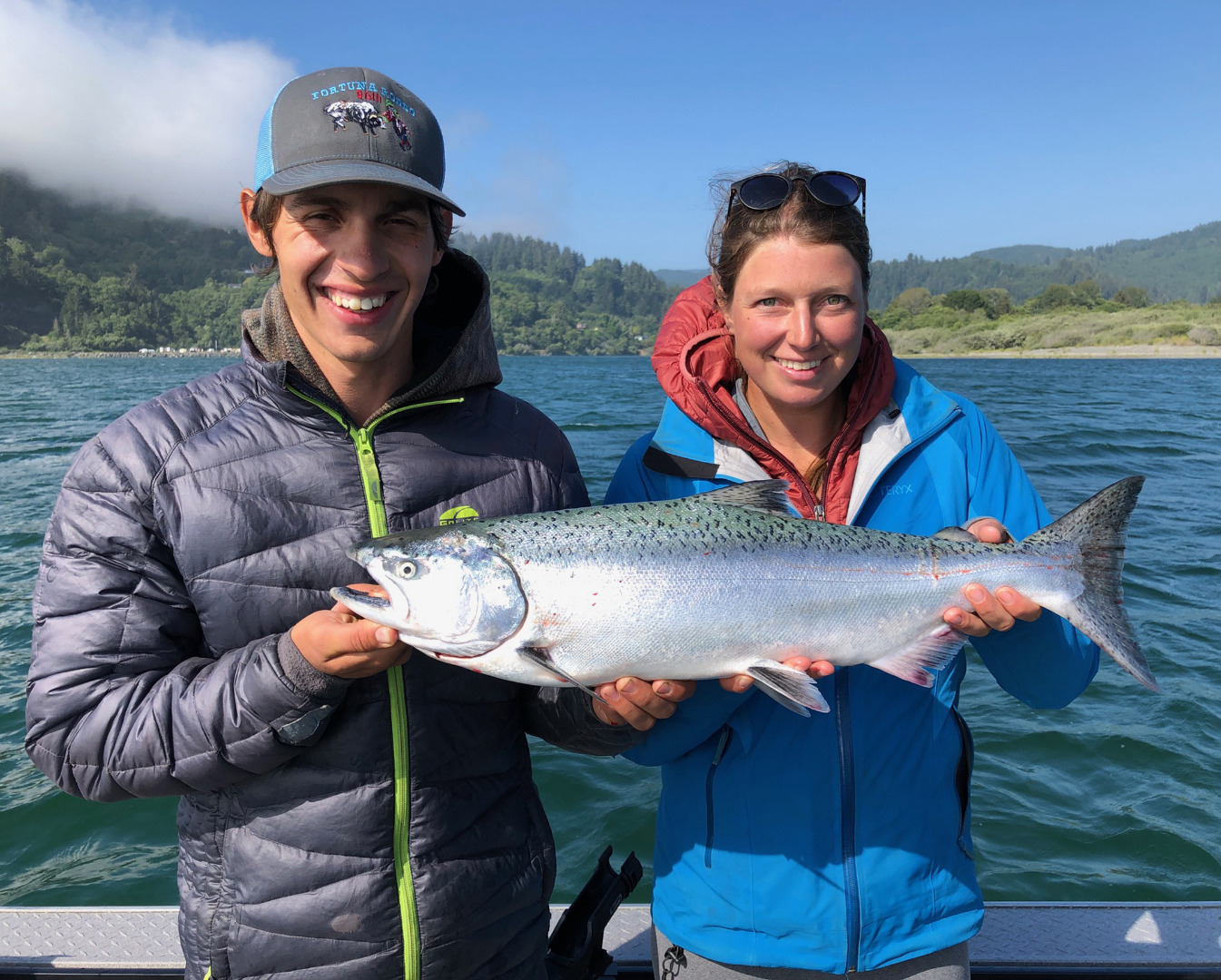 Somes Bar residents Matt Johnson and Louisa Behnke landed a nice spring salmon Monday while fishing the Klamath River estuary. CDFW has shuttled smolts from Iron Gate to other Klamath Basin hatcheries instead of releasing them this summer due to poor water conditions. Hopefully we’ll see more fish like this in the future.
Photo Credit: Photo courtesy of Kenny Priest/Fishing the North Coast

Due to extremely poor water conditions and high risks of fish disease on the Klamath River, California Department of Fish and Wildlife hatchery managers were recently forced to truck more than 1 million smolts out of Iron Gate Hatchery into two other hatcheries in the Klamath watershed. This is the first time in it’s 55-year history Iron Gate Fish Hatchery will not release young salmon early in the summer. Citing lethal water temps, CDFW trucked more than 170,000 smolts to the Fall Creek Hatchery and 1 million to the Trinity Hatchery. Another million smolts will remain at Iron Gate. Once water conditions improve on the Klamath and the threat of disease wanes, the young salmon will be returned to Iron Gate and spend a few weeks re-acclimating before being released along with the smolts that remained at there. The young salmon will have an added advantage as they’ll be a little older and tougher, which should produce a better survival rate. The hope is that come October will see some storms that will cool the water and reduce chances of disease. Until then, more than 1 million smolts will spend the summer away from home. For more information, visit www.wildlife.ca.gov/News/cdfw-successfully-relocates-11-million-hatchery-salmon-until-klamath-river-drought-conditions-improve

Marine Forecast
Conditions will begin to improve slightly Thursday and look decent through the weekend. As of Wednesday, Friday’s forecast is calling for north winds 5 to 15 knots and northwest swells 5 feet at six seconds. Conditions on Saturday will be the similar, with waves 5 feet at six seconds. Sunday is looking the same, with winds out of the north 5 to 15 knots and waves northwest 5 feet at six seconds. These conditions can and will change by the weekend. For an up-to-date weather forecast, visit www.weather.gov/eureka/ or www.windy.com. To monitor the latest Humboldt bar conditions, visit www.wrh.noaa.gov/eka/swan. You can also call the National Weather Service at 443-7062 or the office on Woodley Island at 443-6484.

The Oceans:
Eureka
Ocean conditions have kept the Eureka boats tied up since last Tuesday but it looks like they’ll get a break in the weather Thursday. Conditions might not be good enough to head to the Cape for rockfish, but it should be fishable for salmon.

Trinidad
“Ocean conditions haven’t been great, but we’re still managing to get limits of rockfish daily,” said Curt Wilson of Wind Rose Charters. “The wind has been blowing in the evening, making for some rough water in the mornings, but conditions improve throughout the day. We were able to make it to Reading Rock a few times last week where the fishing has been excellent. We’re getting a good variety of rockfish, along with limits of lingcod. When the weather keeps us close to home, the rockfish bite just north of the Trinidad Head has produced limits of quality black rockfish. A few salmon are being caught off the lagoons each day, but there hasn’t been a ton of effort. A sport boat landed a 16-pounder last week. The crabbing is slowing down and the quality has gone downhill as they are starting to molt.”

Shelter Cove
Salmon has been very slow for the most part, according to Jake Mitchell of Sea Hawk Sport Fishing. “There was a decent bite on Friday right inside the whistle but only a couple were caught on Saturday,” said Mitchell. “I went clear down to Usal a couple days ago looking. We found a fair amount of bait, but only hooked a couple silvers. Weather has been pretty chunky so we haven’t really looked too far lately. The rockfish bite remains really good just about every direction you go.”

Crescent City
“Salmon fishing isn’t red hot, but some are being caught daily,” said Kevin Hooper of Crescent City’s Englund Marine. “There’s a handful of boats that are getting limits each day, while the majority are picking up one or two. Most of the action is straight out toward the south in 100 to 110 feet of water. A couple California halibut are being caught each day by the kayakers and bank anglers off of South Beach. The rockfish and lingcod bite has been steady all season with limits coming fairly easily. The Sisters and South Reef are two of the top locations.”

Brookings
According to Andy Martin of Brookings Fishing Charters, windy weather has limited fishing opportunities out of the Port of Brookings. He said, “A few salmon are being caught near the buoys, but overall action is slow because choppy seas are keeping boats close to shore. Most charters have been cancelling their trips. A few rockfish are being caught south of the harbor and near Chetco Point, but the best reefs have not been accessible because of rough conditions. A break in the wind is expected Thursday, but windy weather is in the forecast again through the weekend. No boats have been able to get offshore for Pacific halibut, which remains open in Brookings. Surfperch fishing has been good at the Winchuck Beach and Crissy Field.”

Lower Rogue
Salmon fishing heated up on the Rogue Bay last week, with some guides getting limits and most getting a fish or two per boat, reported Martin. “The bite slowed over the weekend, mainly because of strong winds,” he said. “Lots of salmon can be seen splashing in the bay. Hot water upriver is keeping the kings from leaving the estuary. More wind is expected this week.”