Another Low Return for Klamath Kings in 2020 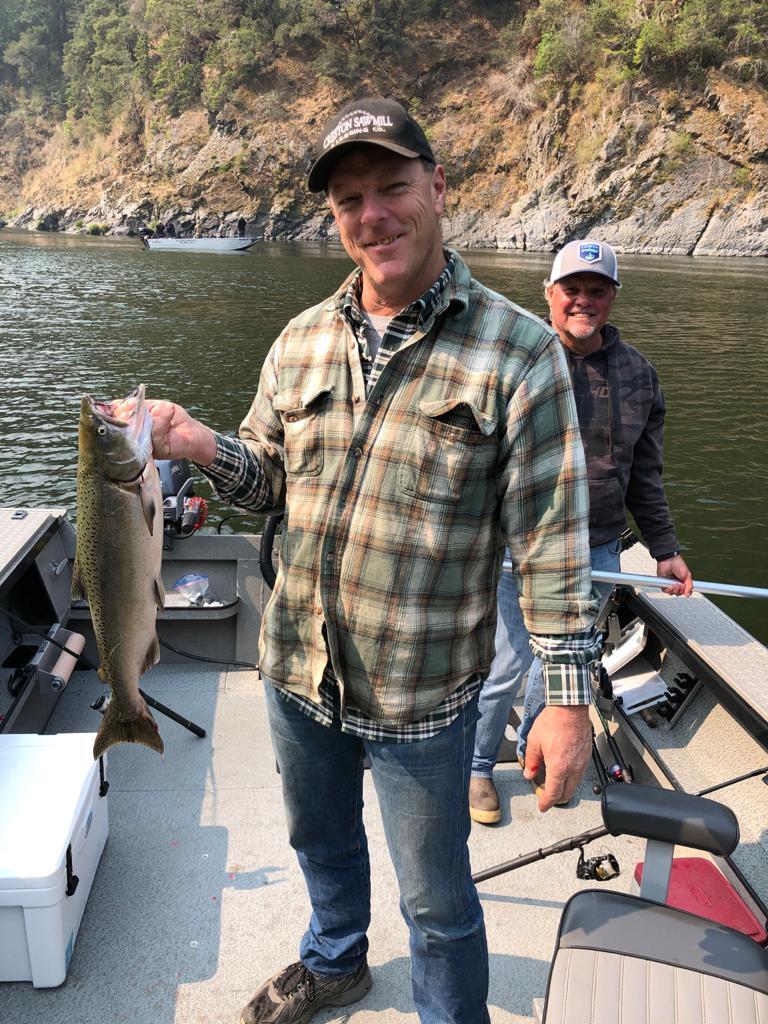 Following a disappointing 2019 adult fall run on the Klamath, 2020 proved to be only slightly better. Unfortunately, the numbers weren’t enough to get us out of the “overfished” category, and it’s likely we’ll have some severe restrictions both in the ocean and in the Klamath and Trinity rivers in 2021. “Based on this year’s run size, I’d expect very limited fishing opportunity in the coming year,” said Wade Sinnen, senior environmental scientist on the Klamath/Trinity Rivers.

Returns to Iron Gate and Trinity hatcheries increased in 2020. A total of 8,331 adults returned to the two hatcheries this fall, while in 2019 on only 5,178 returned. Spawning escapement to the upper Klamath River tributaries (Salmon, Scott and Shasta Rivers), where spawning was only minimally affected by hatchery strays, totaled 5,559 compared to 8,564 in 2019. In 2018 there were 21,109 adults spawned in these tributaries. The Shasta River has historically been the most important Chinook salmon spawning stream in the upper Klamath River, supporting a spawning escapement of 27,600 adults as recently as 2012 and 63,700 in 1935. The escapement in 2020 to the Shasta Riverwas 3,775 adults. Escapement to the Salmon and Scott Rivers was 972 and 812 adults, respectively.

According to the report, 5,117 fall Chinook adults were harvested in the Klamath Basin recreational fishery, which was well over the 1,296 quota. This was due to the fact that many of the 3-year-old kings were less than 23-inches, and were initially counted as jacks, but in fact were adults.

Next up is CDFW’s Annual Salmon Information meeting on Feb. 25 from 10a.m. to 4 p.m. The meeting will provide the latest information on California salmon stocks and the outlook for ocean salmon fisheries for the upcoming 2021 season. The public is encouraged to provide comments on potential fishing alternatives for California ocean salmon fisheries in 2021. A panel comprised of fishery managers, scientists and industry representatives will be assembled to address questions and collect public input that will be used in developing a range of season alternatives for California salmon fisheries at the March 2-5 and 8-11 Pacific Fishery Management Council meetings. These meetings will be hosted as webinars only and the meeting links, agendas and other materials will be posted as they become available. Contact Ian Pritchard for more information at Ian.Pritchard@Wildlife.ca.gov.

The weather ahead
“We’ll see another round of rain this week that will bring rivers up again then mostly dry weather will follow into next week,” said Kathleen Zontos of Eureka’s National Weather Service office. “The next chance for widespread rain will come Thursday through midday Friday. Light rain will continue Friday afternoon into Saturday but will be focused primarily across Del Norte and Humboldt counties. Light rain will dissipate Sunday. Del Norte could see between 2 and 4 inches from Thursday through Sunday. In Humboldt, 1 to 2.5 inches is forecast. Moving into next week, models look really dry. Some models show indications of some very light rain late next week but as of now, it doesn’t look like enough to impact rivers.”

The Rivers:
Smith River
The Smith was down to 14 feet on the Jed Smith gauge Tuesday and a few boats were plunking. The river will be back to driftable shape for Wednesday and Thursday before going back on the rise starting Friday. Flows are predicted to peak at 13,900 cubic feet per second (13.2 feet) on the Jed Smith gauge early Friday morning. Saturday looks like a plunk day but it should be in driftable shape by Sunday. Fishing remains tough.

Chetco/Rogue
High water has stalled steelhead fishing on the Chetco, keeping drift boats off the river and slowing catch rates for plunkers, reports Andy Martin of Wild Rivers Fishing. He said, “The river has been blown out for several days and although it could fish Wednesday, it is expected to blow out again at the end of the week and through the weekend. Fishing was slow early last week before Thursday’s decent bite. It has been high and muddy since. The lower Rogue continues to be a solid bet but is also high and muddy now. Guides tried to fish the Elk Monday but it was too high. The Sixes is muddy and over its bank.”

Eel River (main stem)
The main stem is still big and off color and more rain is on the way. Forecast to reach nearly 13,200 cfs on Saturday morning. Will take a week to 10 days to clear, it could fish by next weekend.

Eel River (South Fork)
The higher reaches of the South Fork fished on Monday, but the fishing wasn’t red hot. The lower reaches were green on Wednesday, but not many boats and not many fish reported. Thursday will be it for a few days as the next round of storms will blow it back out. Predicted to reach 3,500 cfs on Friday night, but could be down to a fishable level by Sunday. Next week should be prime conditions.

Van Duzen
The Van Duzen was running at 1,360 cfs as of Wednesday and never did get close to green. The next storm will push flows back up to 4,000 cfs by early Friday morning. It may be fishable by late next week.

Mad River
The Mad was still flowing around 4,600 cfs on Tuesday and is big and brown. The next set of storms will push it back up to 8,300 cfs early Friday morning. Will likely be off color most of next week. Liners are catching a few right at the hatchery.