Rivers Are Prime but Steelhead are Slow to Show 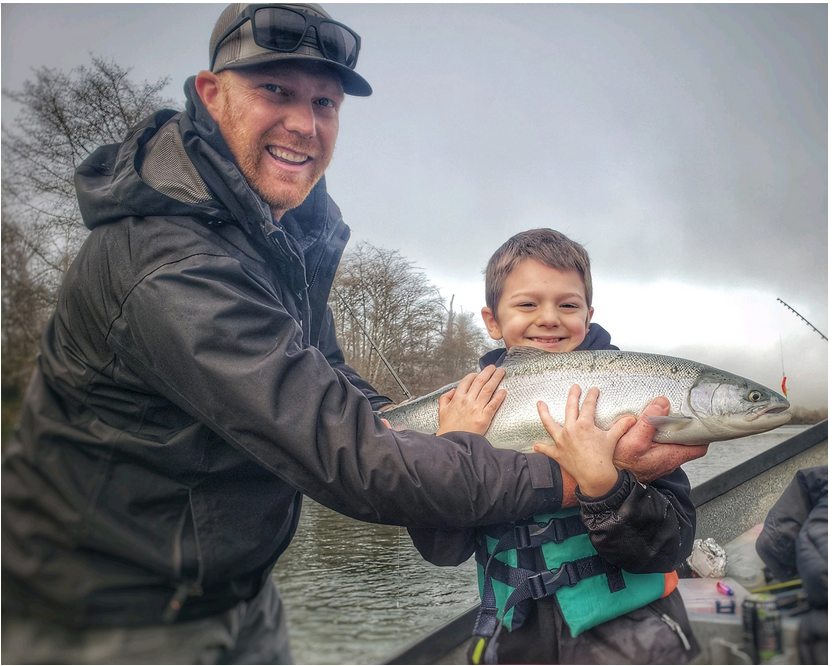 Eight-year-old Bryson Blevin, along with dad Tyler, are all smiles after the young angler landed his first-ever steelhead while fishing the Mad River on Saturday.
Photo Credit: Photo courtesy of Ashley Christie

Last week’s storms finally provided some of the flushing and scouring our coastal rivers desperately needed. As they’ve all now dropped back into fishable shape, the question has become, “where are the fish?” Other than the Chetco, which is dealing with some slides, all the coastal rivers are some shade of green and fishable. There just seems to be a lack of steelhead in all the rivers. But before we it the panic button, we went through this same scenario last year. For reasons unknown, the fish were late to show last year as well. By the time February rolled around, all the rivers were full of steelhead. Let’s hope for the same this year.

Weather outlook
According to Kathleen Zontos of Eureka’s National Weather Service, our next chance for rain will be Thursday and Friday. “It will be wet but totals will be very small,” said Zontos. “We could see up to 1/10 of an inch but it won’t be enough to increase any river flows. The next system is forecast for Sunday through Monday, but the totals are still up in the air. There are indications that a bigger system is building for next Tuesday that could stick around through the week. There’s some uncertainty with this one but the Climate Prediction Center is predicting above normal precipitation from Jan. 24 through the 29th.”

The Rivers
Smith River
River conditions were excellent over the weekend but the fishing was tough. With the Chetco still off color Saturday, the boat pressure was extremely high on the Smith. A few fish were caught but not many. The river is dropping and clearing, and conditions will get tougher. Hopefully the next round of storms will bring in more fish.

Chetco/Elk/Rogue
A couple slides have prevented catch rates from busting wide open on the Chetco, reports Andy Martin of Wild Rivers Fishing. He said, “Flows are below 3,600 cubic feet per second and there are plenty of signs of fish, but slides on the South Fork and just above Loeb Park have visibility down to just a foot. Steelhead can be seen splashing as they move upriver and plunkers are getting some fish, but drift boaters are finding them few and far between. Expect the color to improve significantly as the river drops.”

Fishing has been good on the lower Rogue for shore-based plunkers and boaters anchoring and running MagLip plugs, according to Martin. “There are hatchery and wild fish being caught, and flows are good for steelhead fishing. The Elk also has been fishing fairly well. Pressure is up since some other rivers are still high and muddy,” added Martin.

Eel River (main stem)
The main stem is fishable and dropping quickly. Flows were down to 3,600 cfs on Monday and it was turning green. Predicted to be down to 2,200 cfs by the weekend with lack of rain this week, it will be a good option.

Eel River (South Fork)
The South Fork was in great shape over the weekend and drew quite the crowd. The fishing wasn’t red hot. Most boats got the opportunity at a fish but there were plenty of skunks. It’s predicted to be around 600 cfs by the weekend.

Van Duzen
The Van Duzen was down to 300 cfs as of Tuesday and is very fishable. There were plenty of bank anglers taking advantage over the weekend but reports were hard to come by.

Mad
The Mad is in perfect shape and flowing at 450 cfs as of Wednesday. Prime conditions drew lots of boats and bank anglers over the weekend, but the fishing wasn’t red hot. Anglers caught some nice fish at the hatchery, including one that weighed nearly 20 pounds. The river should be in great shape the rest of the week and it’s probably your best option to land a steelhead.