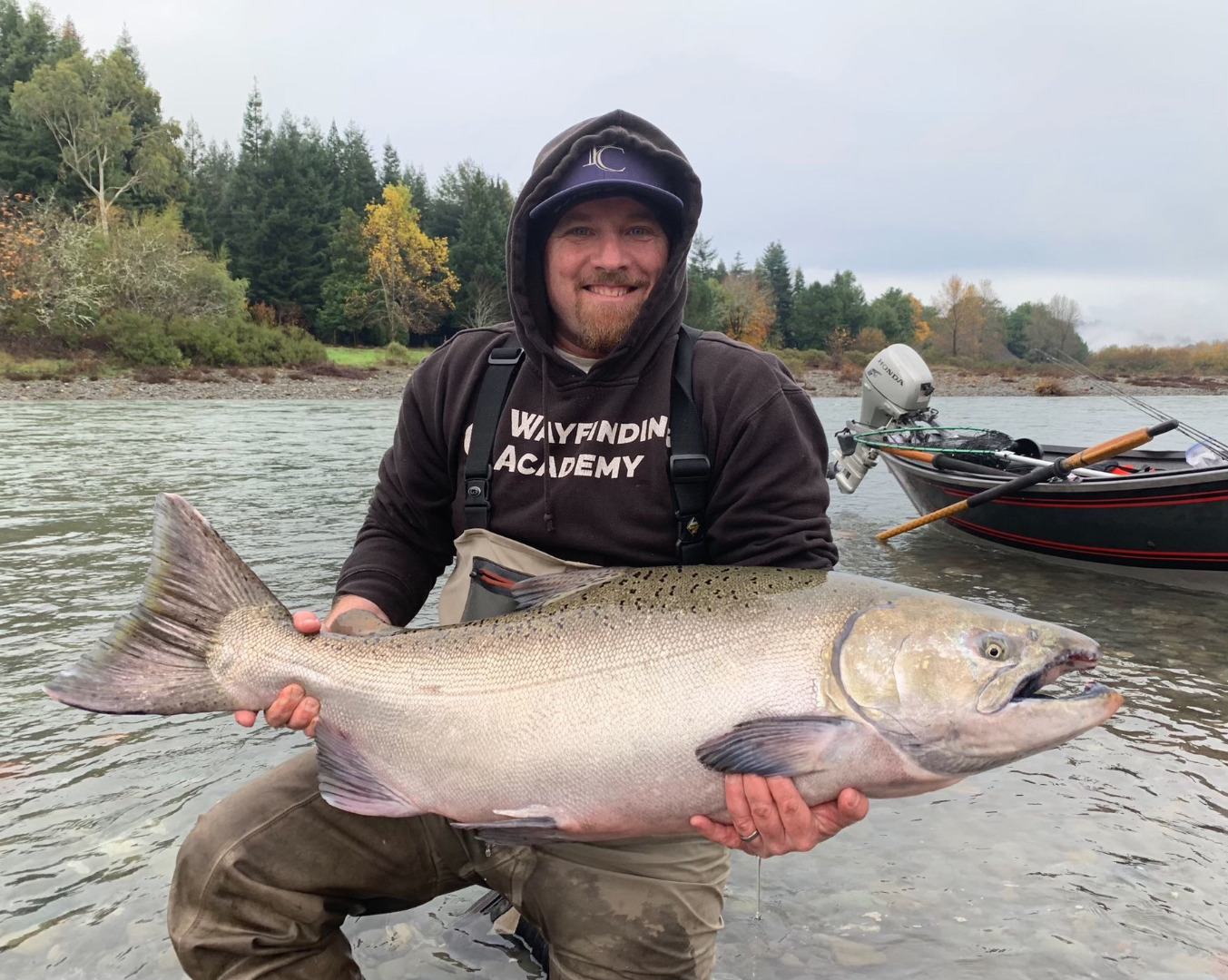 Big, late-fall kings could be making their way into the coastal rivers this weekend. The Smith and Chetco should see flows increase, but it may not be enough to open them to fishing. Pictured is Jeremy Baker of Santa Cruz with a nice king taken on the Chetco in 2018.
Photo Credit: Photo courtesy of Mike Stratman/Redwood Coast Fishing

What was once a promising looking week of rain has taken a dramatic turn towards dry. Both the Smith and Chetco were expected to receive substantial rises on Saturday, which would have potentially opened both to fishing. As of Thursday morning, those predictions did an about face. Storms that had their sights set on the North Coast are now trending further north, leaving us with some glancing blows.

As of Thursday morning, the Smith is predicted to peak at just over 680 cfs on Saturday on the Jed Smith gauge. Prior predictions had flows reaching 3,000 cfs on Saturday afternoon. Minimum flows required to open the river to fishing are 600 cfs. Whether there’s enough flows to warrant opening will be a game-time decision made by the CDFW. To check on river openings and closures, call the low-flow hotline at 822-3164. To monitor the Smith River forecasts, visit https://www.cnrfc.noaa.gov/graphicalRVF.php?id=CREC1.

The Chetco is in the same boat as the Smith. Flows are predicted to be in the 600 to 700 cfs range for the weekend, and opening the river to fishing is up in the air. Looking at the long-range prediction, there is a decent rise predicted to start next Tuesday. The way things are going, I wouldn’t bet any money on it. For Chetco River forecasts, visit https://www.nwrfc.noaa.gov/river/station/flowplot/flowplot.cgi?lid=CHTO3.

According to Kathleen Zontos of Eureka’s National Weather Service, the North Coast will see pulses of rain Thursday through Sunday. “The rain will arrive late Thursday night and Friday morning, with showers tapering off on Friday night,” said Zontos. “The first half of next week looks to be wet as well before letting up late next week.”

The Mad, Eel and Van Duzen rivers are all expected to rise slightly this weekend, but it doesn’t look like it’ll be enough to open them to fishing. Call the low-flow hotline (822-3164) before you head out to determine if your favorite river is open or closed to fishing.

Weekend Marine Forecast
After a few decent days, the ocean is forecast is predicted rough seas by Friday. Winds will turn southerly Thursday, and will continue to pick up Friday. Hazardous sea conditions will also develop later Friday and Saturday with the arrival of a larger northwest swell. Saturday’s forecast is calling for south winds 5 to 10 knots with northwestern waves 13 feet at 13 seconds. Sunday is looking better, with winds out of the south 10 to 15 knots and northwestern waves 9 feet at 13 seconds. These conditions can and will change by the weekend. For an up-to-date weather forecast, visit www.weather.gov/eureka or www.windy.com. To monitor the latest Humboldt bar conditions, visit www.wrh.noaa.gov/eka/swan. You can also call the National Weather Service at 443-7062 or the office on Woodley Island at 443-6484.

Sport Dungeness crab update
Conditions made for some tough crabbing over the weekend. Boats weren’t able to head offshore until Monday to set their gear due to extremely rough seas. Tim Klassen of Reel Steel Sport Fishing was pulling pots on Tuesday morning for clients and reported a solid 10-keeper per pot average. Inside Humboldt Bay and some of the local estuaries reported some decent fishing with a few keepers per trap along with plenty of small ones. The keeper crabs are full and clean.

The Rivers:
Smith
Fishing at the mouth and the Sand Hole was dead over the weekend, according to Britt Carson of Crescent City’s Englund Marine. “Up river, every hole is full of salmon but they are mostly dark,” said Carson. “Once the rain hits this weekend, those fish will be moving quickly to the spawning grounds. The hope is that there’s lots of new ones in the ocean that will come in with the increased flows.”

Chetco
“The Chetco is full of salmon, with fish spread throughout the river, and should fish well if it opens this weekend,” said Andy Martin of Wild Rivers Fishing in Brookings. “It could blow out by Sunday if the forecast is correct. Anything above 4,000 cfs this time of year will be muddy. Chetco kings will still bite in high flows on the softer edges of the long flats, like the Willow Run below Loeb Park and Moffett Rock. ODFW will make a decision to open based on the arrival of the storm, probably on Thursday or Friday.”

New Zealand Mud Snails found in the Mad River
In mid-October, a large density of New Zealand Mud Snails was discovered near the Annie Mary Bridge by the Blue Lake Tribes Environmental Dept. The tiny aquatic snails can reach, on average, up to 4-6 mm long in the western United States. Upon reaching maturity at 3 mm, females can produce 230 new females per year; estimates indicate that one snail and its offspring can result in over 2.7 billion snails within 4 years according to CDFW. They may consume up to half of the food resources in a stream or river and have been linked to reduced populations of aquatic insects, including mayflies, caddisflies, chironomids, and other insects important to trout and salmon.

They are found on a wide variety of substrates and vegetation in fresh and brackish lakes, rivers, streams, and estuaries. Dense populations become the dominant macroinvertebrate through displacing and outcompeting native species; some North American streams have reached densities over ¾ million individuals/m2.

Once in the river, getting rid of them is impossible, but there are ways to minimize the spread. This is extremely important as we approach winter steelhead season with anglers moving from river to river. Many AIS (aquatic invasive species) are difficult, if not impossible, to see in the environment and can be unknowingly transported to new locations on equipment. Therefore, decontamination is necessary to prevent the spread of AIS between different waterbody locations. To achieve this, equipment should be decontaminated following the protocols outlined in this document. All equipment that comes into contact with water during field activities and watercraft should be decontaminated using one or more of the protocols listed below.

General procedures to prevent the spread of AIS:
• If decontamination is not done on site, transport contaminated equipment in sealed plastic bags and keep separate from clean gear.
• Gear may be dedicated for a specific field site but should be left on site and be cleaned when moved off site.
• Sets of field gear may be rotated in and out of field per cleaning cycle.
• When practical, begin work upstream and work downstream. This avoids transporting AIS to non-infested upstream areas.

Equipment Decontamination/Disinfection Methods
Option 1: Standard Decontamination Freeze + Saltwater Immersion + Dry. This option consists of three parts, as freezing alone may not kill some organisms
• Scrub gear before leaving field with a stiff-bristled brush to remove all debris. Thoroughly brush small crevices such as boot laces, seams, net corners, etc.
• Bag gear for transport from field to office.
• Place gear and bag in a freezer below 32°F for a minimum of eight hours.
• Thaw gear and bag.
• Immerse gear and bag in 5-10% saltwater solution for 10 minutes.
• Rinse gear.
• Hang gear to dry.
For more information, visit
https://wildlife.ca.gov/Conservation/Invasives/Species/NZmudsnail