Salmon and Anglers Waiting on Rain 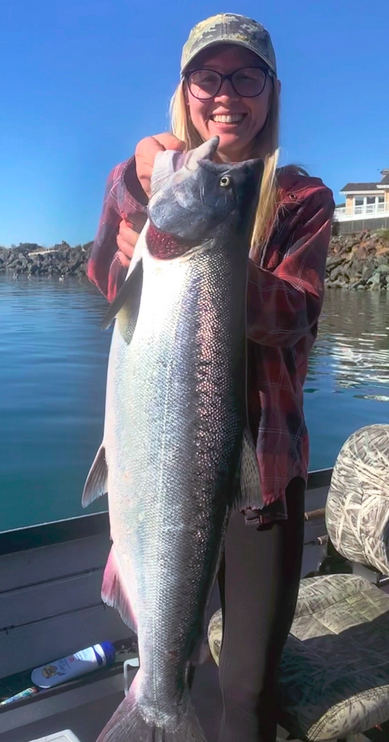 In an all too familiar pattern, October is again looking like it will be void of substantial rainfall. Aside from a few weak systems, it seems we won’t see enough rain to put a rise into any of our North Coast rivers or open them up to fishing anytime soon. This is nothing short of torture for coastal salmon anglers chomping at the bit to drift the Smith, Chetco or Eel rivers. What makes it even more painful are the memories that keep popping up on social media showing big green rivers, very large salmon and even bigger smiles.

Humboldt and Del Norte counties have been dry since the weekend of Oct. 11, when just enough rain fell to put the Smith and Chetco on a very slight rise. That got some fish out of the estuary and into the lower sections of the river, but it wasn’t enough to open the rivers to fishing.

There hasn’t been any rain to speak of since then. And there isn’t much on the horizon. “There is a weak front moving into the area on Friday night and into Saturday morning,” said Kathleen Zontos of Eureka’s National Weather Service. “It won’t do much to our river levels. We’re looking at maybe 1/10 of an inch in the Smith basin and less in Humboldt. Another weak system is forecasted for the 27th, but that is looking light as well. A ridge of high pressure has been either blocking or weakening systems that are trying to move onshore and forcing storms to track far to our north, keeping them from sagging into the Northern end of the state. The models are showing below normal rainfall at least through the end of the month.”

Dungeness crab testing continues
The domoic acid testing in Dungeness crab is nearing completion on the California coast. Only Avilla Beach in Morrow Bay and Manchester Beach in Fort Bragg are awaiting results. The only test to date which exceeded action levels was in Duxbury Reef, and the two tests following have both come up clean. All other ports, including Eureka, Crescent City, and Trinidad have all tested clean. Crab quality testing is scheduled for the end of the month. For test results, visit https://rb.gy/b0xydv.

The Oceans:
Eureka
The rough weather has kept the boats tied up all week, and it doesn’t look like this weekend will be much better. The all-depth fishery is slated to open Nov. 1 and run through the end of the year north of Point Arena. There are no special gear requirements, though unless otherwise specified, regulations require anglers to use not more than two hooks and one line to target groundfish. All other season dates, bag limits, size limits and other special area closures still apply.

Shelter Cove
The rockfish season is still plugging along out of the Cove according to Jake Mitchell of Sea Hawk Sport Fishing. “We spent a couple days of Bear Harbor and one day at the Old Man this week,” said Mitchell. “The bite was pretty good, we had limits every day in just a few hours effort. The lingcod grade wasn’t great, but the rockfish grade was excellent.”

Brookings
Lingcod and rockfish are biting well at the inshore reefs, but rough water from strong northwest winds have kept anglers from going offshore for Pacific halibut reports Andy Martin of Brookings Fishing Charters. He said, “Crabbing has closed for the season off the Oregon Coast. The marine forecast improves over the weekend, but strong winds are expected through Friday.”

River Closures
Currently, all the North Coast rivers subjected to low flow fishing closures, including the Eel, Mad, Redwood Creek, Smith and Van Duzen are closed. Sections of rivers that are open include the main stem Eel River from the paved junction of Fulmor Road to its mouth, and the main stem Smith River from the mouth of Rowdy Creek to its mouth. The Mad River from the mouth to 200 yards upstream is closed until Jan. 1, 2021.The Department of Fish and Game will make the information available to the public no later than 1 p.m. each Monday, Wednesday and Friday as to whether any river will be closed to fishing. The rivers can be opened up at any time. The low flow closure hotline for North Coast rivers is (707) 822-3164.

Upper Trinity quota update
According to CDFW, the Upper Trinity quota for adult king salmon will be met as of 11:59 p.m. on Sunday, Oct. 25. This triggers the closure of the adult Chinook salmon fishery downstream of the Old Lewiston Bridge to the State Route 299 West bridge at Cedar Flat. No closure date has been provided for the Lower Trinity. The Upper Klamath, which closed to the retention of adult kings on Oct. 18, and Upper Trinity will remain open for harvest of jack (2-year-old) Chinook salmon (less than or equal to 23 inches). All adult Chinook salmon caught must be immediately released and reported on an angler’s North Coast Salmon Report Card.

The Rivers:
Lower Klamath
Fishing has been tough on the lower Klamath, as not many fall kings are making their way through the lower river. There are some steelhead around, and the occasional Coho. The late-run kings should be making their way into the river soon, especially if we see some rain. Boat pressure has been light. The daily bag limit is two jack Chinook 23-inches or less and two hatchery steelhead.

Trinity
We started to see some fresh salmon move into the Junction City area last week, reports Junction City Store owner Frank Chapman. “Right now, there’s a mix of older fall fish and some really bright ones,” said Chapman. “Quite a few steelhead showed up as well, so the fishing has really picked up in our area. Roe under a bobber has been really good for salmon and will also catch steelhead.”

Chetco
Salmon fishing has been fair on the Chetco estuary, reports Andy Martin of Wild Rivers Fishing.  “One or two big fish are being caught a day, along with a decent number of jacks, but boat traffic has increased and overall catch rates are a fish for every fifth or sixth rod,” said Martin. “The outgoing tide has been best. Lots of salmon moved upriver with the rain in early October, while salmon also are being caught and released by anglers finding for rockfish in the ocean.