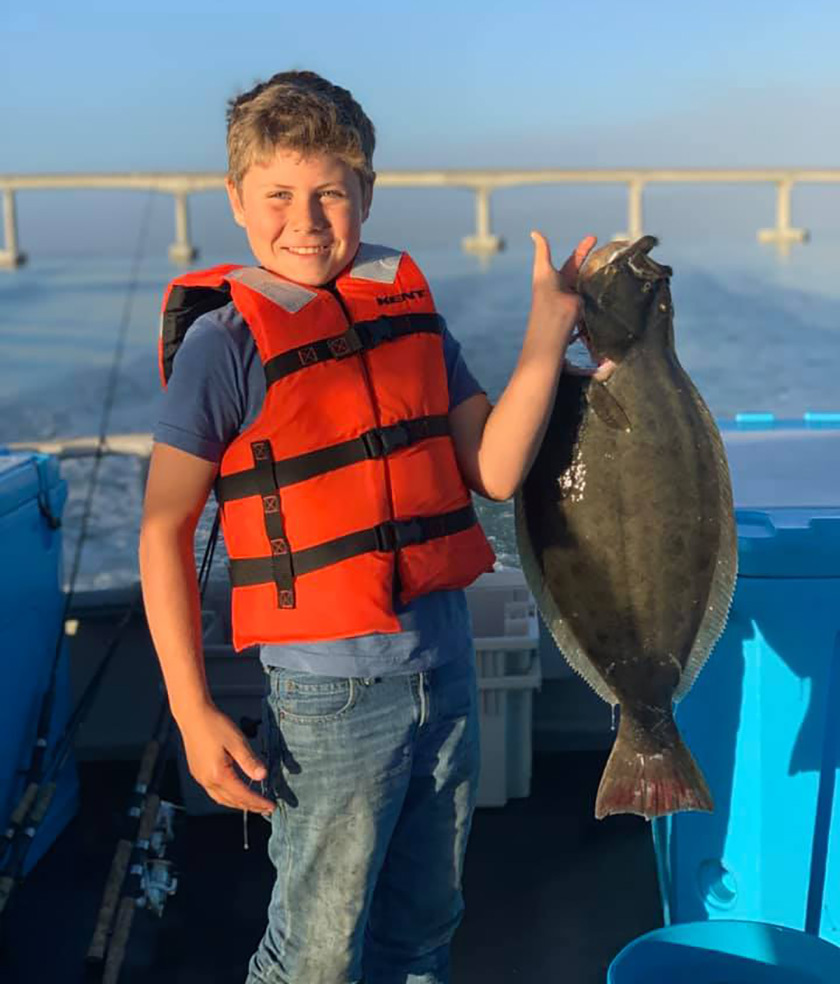 The California halibut fishery has been a bright spot amongst our fisheries this season as Humboldt Bay continues to kick-out quality-sized fish. With both ocean salmon and Pacific halibut closed for the year, the bay fishery has been a life-saver. The charter fleet, whose only real option is a long run to the rockfish or tuna grounds, has taken full advantage as has the sport anglers looking to get out of the house. The weekends have seen the Bay loaded with boats and kayaks of all shapes and sizes looking to land a tasty meal. The fishing has been excellent for most of the season, and one of the reasons is the number of anchovies in the bay. Without an influx of freshwater from the rains and a consistent food source, there’s no reason for the halibut to leave. The best way to catch them is live bait, but guys fishing dead bait and even jigs and swimbaits are having plenty of success. The fishing seems to really improve when we have the smaller tide swings, which was the case last weekend. Water temperature also plays a big role. The temperatures closer to bay entrance has been a little colder than normal, which is one of the reasons the majority of the halibut are up higher in the bay this season. “I think this year’s Bay bite is the best I’ve ever seen,” said Tony Sepulveda of Shellback Sport Fishing. “There’s been so many really nice fish. Ten to twenty-pounders are making up a good portion of a limit.” The recreational fishery for California halibut is open year-round. The daily bag and possession limit is three fish, with a minimum size limit of 22 inches total length.

Klamath River quota update
According to Dan Troxel, an Environmental Scientist on the Klamath River Project, 255 adult salmon had been harvested from the Highway 96 bridge at Weitchpec to the mouth towards the quota of 648 for the week ending Sept. 2. Of those, 89 adults were caught below the Hwy. 101 bridge. The spit fishery will close when 194 adults are caught below the 101 bridge. Only the spit area will close to fishing once this quota is met, fishing will remain open upriver of the spit until the 648 quota is met. Anglers may keep track of the Klamath and Trinity river quotas by calling 800-564-6479. For Klamath and Trinity fishing regulations, visit https://fishingthenorthcoast.com/2020/07/29/2020-klamath-trinity-regulations/

Saturday is statewide free fishing day
The last chance of the year to fish for free arrives over the Labor Day holiday weekend. Free Fishing Day is being offered by the California Department of Fish and Wildlife (CDFW) on Saturday, Sept. 5. While no fishing license is required on free fishing days, all fishing regulations, such as bag and size limits, gear restrictions, report card requirements, fishing hours and stream closures remain in effect. Every angler must have an appropriate report card if they are fishing for steelhead or sturgeon anywhere in the state or salmon in the Smith and Klamath-Trinity river systems. For more information, visit https://cdfgnews.wordpress.com/2020/09/01/sept-5-is-free-fishing-day-in-california/

The Oceans:
Eureka
The sport fleet hasn’t been offshore since last week due to rough ocean conditions. On Wednesday, the wind finally relented, and boats were making their way to the Cape for rockfish. The best option this past week has been California halibut in Humboldt Bay. According to Tim Klassen of Reel Steel Sport Fishing, fishing was good over the weekend. “We’re seeing some bigger fish now, and there seems to be plenty of them,” said Klassen. “The bay is still full of bait, so it’s pretty easy to come by right now. That’s the best option, but plenty of fish are being caught drifting dead bait as well as swimbaits. The best bite has been above the bridge recently,” added Klassen. The tuna water is currently sitting around 65 to 70 miles from the entrance. Some of the faster boats will make the run, especially given the calm ocean conditions over the next several days.

Shelter Cove
The salmon bite was pretty good from Wednesday through Saturday, but completely died on Sunday and hasn’t improved since reports Jake Mitchell of Sea Hawk Sport Fishing. “We had salmon limits a couple of days after getting limits of rockfish and lingcod,” said Mitchell. “The grade was pretty nice with several fish over 20 pounds. The biggest I saw was 32.5 pounds dressed. Rock fishing was great as well this week, with most of the effort around the Hat. We’ll be chasing tuna for the next three days. Looks like it’s 50 or 60 miles depending on which way we go.”

Crescent City
The big news this week is the return of the Thresher sharks reports Britt Carson of Crescent City’s Englund Marine. He said, “There’s been quite a few caught the past several days, including a 200-pounder on Saturday. South Beach has been the spot from the breakers out to Round Rock. The California halibut fishery has been quiet as not many are targeting them anymore. The rockfish and lingcod bite is still really good when the boats can get out. The reefs, north and south, are producing limits of fish.”

Brookings
The ocean out of Brookings was finally calm enough to fish on Tuesday according to Andy Martin of Brookings Fishing Charters. He said, “The forecast looks good all week. Water temperatures are down to 48 degrees after a week of strong winds and upwelling. The tuna are nowhere near Brookings. Just over half of the halibut quota remains for the Brookings and Gold Beach area. The season likely will remain open through October. Fishing was fair for lingcod and rockfish on Tuesday, in part because of the colder-than-normal water.”

The Rivers:
Lower Klamath
Fishing is picking up on the lower Klamath. There are still really good numbers of steelhead, both half-pounders and adults, in the river from the Glen to Blue Creek. Quite a few jacks are being caught daily and a few more adults were starting to enter the lower river as of Wednesday.

Lower Rogue
“Salmon fishing has finally hit full stride on the Rogue Bay,” said Martin. “Many of the guides are now getting limits or near limits. The incoming tide has fished well between the green buoy and Jot’s Resort. The water temperature dropped to 70 degrees and some of the salmon have shot upriver. More jacks also have arrived.