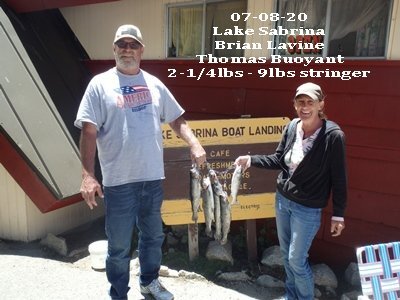 Another busy and warm week and weekend at the Lake. So many people wanting to get out of the heat and boy is it hot in Bishop – 108 at the airport yesterday – a new Bishop record – 80 at the Lake – now you know why it was a busy one at the Lake.

Fishing picked up a bit at the Lake as we received a stocking from Wright’s Rainbows out of Thatcher, Idaho. NightCrawlers, PowerBait and Salmon Eggs are still the hot ticket especially at the Inlets where there is cool water coming in. Thomas Buoyants and Trout Traps were also working at getting a few fish. With the temps up there, the fish are going deeper looking for the cool water. The Owens Valley Sucker fish are also starting to come up and spawn, thus the large schools of fish you can see cruising the dam.

Those that had patience and a bit of luck on their side like Robert & Rose Patterson caught fish for dinner – one weighed in at 2-1/4lbs – they were using Trout Traps. Dennis Winchip used a Blue Thomas Buoyant to catch his dinner. Brian Lavine landed a 2-1/4 pounder along with a few others using a Thomas Buoyant. Two hours and a few NightCrawlers were all that was needed for Matt Cahn, Brian Seitz, Tom Chambers and Gary Chambers to catch a few limits and dinner for a few days.

Couple more nights of the bear roaming our area and then poof – not a sighting, but we have heard of a Mountain Lion down in the Aspendell area – watch your puppers and kitties! And we’ve had a few sighting of an Osprey along with the Eagles still hanging around the back of the Lake.

Wildflowers are starting to make more of an appearance – FireWeed and our Purple Iris have now started blooming. Not sure what happened this year with our White Lilac – didn’t bloom and the ButterFlys that normally appear with the blooming did not appear either – Mother Nature keeping us on our toes.

We took a picture of the Auxiliary Spillway that SCE will be repairing over the next few months. All they had done was put up some tape in a few places. We’ll be checking it out every week for you though.

Fishing etiquette is once again becoming a bit of a problem at the Lake and we don’t like problems. If you come upon someone fishing, please don’t fish right next to them – take a bit of hike farther down and don’t cast over into their spot. Same at the Inlet, there are so many areas to fish on this Lake go find another ‘soon to be’ favorite spot. Also, DON’T FORGET TO PICK-UP YOUR TRASH!!!

Here is the forecast for the week from www.weather.gov (enter Aspendell, CA in the search and scroll down to see the temps). Howard the local and loved weather guesser has forecast some heat generated thunderboomers thru the week, so might want to pack the raingear.

Sunny, with a high near 80. Light and variable wind becoming north northeast 9 to 14 mph in the morning. Winds could gust as high as 21 mph.

Sunny, with a high near 80. Northwest wind 8 to 17 mph becoming southeast in the afternoon. Winds could gust as high as 26 mph.

Mostly clear, with a low around 53. South wind 6 to 16 mph becoming west after midnight. Winds could gust as high as 24 mph.