Why The Remington Model 870 is Not Dead Yet 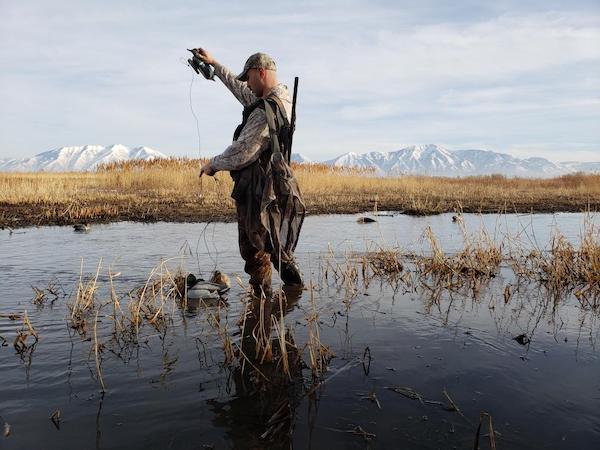 Big game is the rage in Utah, but these guys love their ducks.
Photo Credit: Photo by Homer Raymundo

The Remington 870 is one of those shotguns that people either love or toss in the back of the gun safe and maybe take it out here and there to clean it. To me, the Remington 870 is an iconic shotgun that will never fade away. I’m sure most people have a story or two about shooting a Remington 870. Or as a reader described it, he has a “meat gun/sledgehammer/chainsaw/wading stick/boat paddle, etc. story” This alone is why I say the Remington 870 is not dead and should probably get more credit.

My introduction to it was during a rabbit hunt shooting my ex sister in law’s shotgun. It was a Remington 870 Express Super Magnum. I was told, “put that bead on the rabbit and pull the trigger.” It was no joke; it was smooth and shot for an entire day. That day I was impressed and decided I needed one for myself. I bought a duck hunting model that came with some marsh camo on the stock and it was slightly used so I got a good deal on it. Being that I mostly hunt waterfowl, a synthetic stock was the way to go.

Getting into some real talk about the Remington Model 870 shotgun, you should know this is a workhorse. Taking it apart is done in less than a minute after a few tries. It is simple to operate and maintain. I think that’s why a lot of people start on the 870. The ease of maintenance also allows for easy troubleshooting if you have any issues. The simplicity needs to be appreciated when looking at this shotgun. I do have one major headache but it’s not something specific to the 870. Keeping rust off of the bluing is almost impossible. I plan on getting some cerakote or some other way of protecting the bluing on my shotgun. I do love that I can take this gun into the marsh and fall in the water and know it will keep fighting on. Simple mechanics need to be given more credit.

The standard gun comes with an Improved Cylinder choke. The choke is easy to change and there are many aftermarket choke tubes made for the Remington 870. The Remington 870 also comes in many different variations, from gauge to barrel length. It even has some rifled barrels for predator or turkey shooting. The parts are easy to exchange and some models even come with multiple barrels. Because this shogun has been around for over 50 years, it can be whatever you need it to be. I shoot my 870 Express Super Magnum in 12-gauge. I chose the Super Magnum so I could shoot 3 ½ in shells. I like the flexibility of the Express Super Magnum version. If I wanted to, I could turn it into a home protection shotgun or even put a longer barrel on it and turn it into a target gun only if I wanted.

Pricing on the Model 870 can vary greatly. You can find them from $279 dollars (on sale) to $749.99 on a Wingmaster (the Cadillac model). If I haven’t beat the dead horse enough yet (I’d use my 870 for beating a dead horse) the money you spend is easily the best investment on a shotgun. A lot of people start on the 870 and “graduate” to other shotguns. I think I’ll still do my pump action for a long, long, long time. For someone starting into shotgun sports and upland or waterfowl hunting, a simple model 870 will work great, especially since you can put shell after shell through it.

I myself have been putting lots of shells through my Remington 870. This year I have been hitting the range about every week on my days off trying to get things dialed in since last season I lost more ducks then I like to admit. There are a few things I have had to do to my shotgun that I did not expect. The most recent adjustment I had to make was on the comb of my shotgun. The fit wasn’t right and that’s why I kept wounding or missing ducks. At least that’s one reason. I purchased a sleeve with some foam inserts that have raised the comb enough that I’m lining up better on my shotgun. It was a simple $25 dollar fix. The other adjustment I had to make was a little more technical and it intimidated me a little bit.

Apparently, at some point, Remington decided to start making some parts of the action out of a mold. This allowed for some inconsistencies in manufacturing and in performance. I didn’t notice this until my first winter hunting with my shotgun. I had charged a shell and had just fired at a goose flying in front of my blind when I went to reload and my shotgun didn’t expel the spent shell. My level of frustration left me fuming. I figured it was the shell, and then I blamed it on being so cold outside the metal wasn’t expanding enough to allow my extractor pin to work. When I’d shoot clay pigeons I was expelling spent shells with no problem so it must have been something else. After my second year, the problem got worse and I could not get more than one or two shots off before I was jammed.

The solution was simple it took a little research and it took a good friend telling me I needed to replace my extractor pin. He explained to me how the molded pieces would wear and not be able to extract and that I needed to buy a replacement, machined, extractor pin. I went to the experts on YouTube and put on some big boy pants and gave the repair a shot. It was easy and I have never had an issue since. That replacement part was another $20 dollars.

All in all, after less than $100 dollars I’ve got my shotgun where I need it to be. I’m not a genius and I was able to get things set correctly and performing well. I do try to maintain it as best as I can. During the hunting season, I clean it once a month. I go out hunting 2-3 days a week and don’t have the time to do a deep clean. I’ll run a bore snake after each hunt to keep the barrel clean and lubricated. I’ve found that keeping all parts lubricated makes the gun operate even more smoothly. I like to see a thick coat on all moving parts. I may go over the top but I also ask a lot of my Remington 870. During the hunting season, I find that I bring most of the vegetation around my duck holes back home inside my shotgun one way or another. The gun still fires. I fell into the water and my shotgun still fired and dropped a swan.

I know most people own one of these shotguns. It’s a workhorse and a simple shotgun to learn on. My wife’s first duck was shot with an 870 and she shot her first Sage grouse with an 870. Guns that have stood the test of time for as long as the Model 870 has and have been sold over 11,000,000 times must be worth the money. Some argue that for waterfowl hunting you should have a semi-automatic shotgun or that for upland hunting it has to be a side by side or over and under. I argue that a good pump shotgun that works well and is familiar, that is the gun I want for everything. It is versatile and doesn’t break the bank. Maybe one day I’ll retire my 870 and buy something else. I do plan on buying a dedicated upland gun one day but I’m sure my Remington 870 Express Super Mag will be handed down to my daughters and hopefully their kids too. I would put money that in 100 years that shotgun will still stop some flights. That’s why the Remington 870 will never die.

Editor’s note: The outdoor duo of Homer and Kaela Raymundo is an interesting story. They met at the scene of an accident. He’s a firefighter and she’s in law enforcement. The inspiration for their blog came during their first duck hunt together. Follow these guys by visiting www.birdsndogs.com and clicking the links. They are also on Instagram. The author’s trusted 870 is customized for waterfowl, just the way he likes.
Photo Credit: Photo by Homer Raymundo The 870 Super Mag is chambered for 3.5-inch shells that will reach out there
Photo Credit: Photo by Homer Raymundo