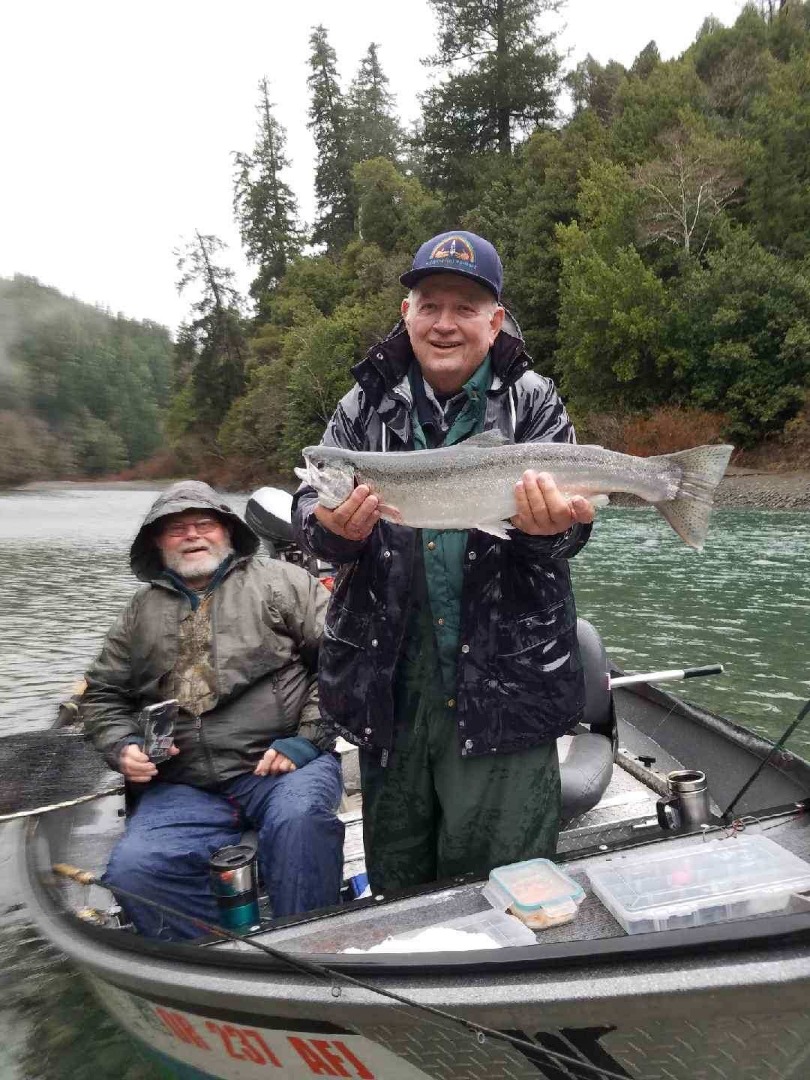 Last week, anglers on the Chetco River had to settle for steelhead fishing rated as fair, which is better than the slow days that have haunted the best of fishing guides in recent weeks.

But, with another storm lurking on the horizon, who knows what the fishing will be like next week after the high water starts dropping and clearing.  One can only hope that the main steelhead run is later than usual.

Think of steelhead fishing like this.  In the days before side-drifting became popular, anglers had to depend on pulling plugs to get their metal, with 3- to 5-fish days being good days.  After side-drifting took over the spotlight, it was common for boaters to bring in double digits to the boat.

So if you want maximize your days on the water, think of 3-fish days as being a great day and enjoy being with Mother Nature and all Her marvelous wonders.

“The fishing’s been terrible, but the Chetco did pick up a little yesterday,” said Jack Hanson of Jack’s Guide Service on Thursday. And one of my clients did have a 14- or 15-pound steelhead on that smoked him like a pipe before finally breaking him off.

“I got a couple and I saw that Albert Kutzkey got a couple, and I see that Harvey Young got one or two. But we’re hoping that’s changed a little. I felt a little bit of optimism yesterday when I saw some fish moving on the lower reaches.”

On Wednesday, the Chetco was at 1,600 cubic feet per second, with many guides stating that the water conditions were very good. But with a projected raise to 27,000 cfs by the National Weather Service, Hanson is hoping that the rise in flows will “shuffle the deck”.

As this article is being penned on Thursday, the Chetco River has risen sharply to 7,340 cfs.  That particular rise and fall of the Chetco would normally be enough water to usher in hordes of winter steelhead that are normally slated to peak in the middle of the month.

But the proverbial buck of a rising river doesn’t stop here.  That 7K cfs figure has predicted to level off through the wee morning hours of Friday and begin rising toward 27,000 cfs on Sunday. By Monday or Tuesday, the Chetco should be on-the-drop, at which time bank anglers favoring plunking techniques should rule the river.

When the river drops under 4,000 cfs, boat anglers will be deploying side-drifting and plug-pulling techniques.

Whether or not a new push of steelhead comes into the river, Hanson does offer three extra-helpful tips toward unhinging the rusty jaws of a steelhead this season.

1. Work extra hard for your steelhead this season.

“You’ve got to work hard for ‘em. I’ve been working hard all season for these fish. It’s like panning for gold nuggets. You have to keep prospecting.”

2. When the oarsman tells you to set the hook – by all means, set it – no ifs, ands or buts. And you will not feel all the bites. That’s where the trained eye of the oarsman is invaluable.

“I’ve had some bites that were really heavy, and other bites that are really light, like pulsy, little nibbles. So, when the oarsman shouts out for you to set the hook, set it immediately – regardless! Otherwise you’ve missed a golden opportunity to catch a fish. One out of 6 or 7 of those light bites is going to be a fish.

3. Lower your expectations on steelhead this season.

“I’m telling my clients that they have to re-evaluate the situation and put it in another perspective,” says Hanson. “If I have 2 or 3-fish days, I’m really excited.  It’s like I’m a reborn steelheader. This season you have to have a Hal Borg type attitude. Hal always said, ‘If you have one or two, you should be happy’. And I agree.”

The Lower Rogue Kicking out Steelhead for Boaters on Anchor
Last week, boaters who were setting out plugs like Brad’s Wigglers and Wee Wigglers, and Mag Lip 3.0 to 3.5 have been puttin’ the hurtin’ on fresh incoming steelhead. Almost all anglers have been anchoring up and setting out plugs, much like fishing for springers.

The main action has been taking place from the old mill site down to Claybanks.

“Every time I go out I’m consistently hooking between 5 and 6 fish, and landing at least 4 if not 5 steelhead,” said John Anderson of Memory Makers Rogue River Guide Service. “The guys side-drifting aren’t coming anywhere near that – it’s those Buzz Ramsey plugs that are doing it.”

To briefly summarize what Anderson is referring to, Yakima Bait made a plug called an M2-SP FlatFish. With Ramsey wanting to popularize this salmon killer even more, a public contest changed the name to the Mag Lip 4.5. So, the M2-SP FlatFish and the Mag Lip 4.5 are the same animal, with both having the same skip-action beat.

Ramsey down-sized the same lure to a 3.5-inch model and then a 3.0-inch model, with both lures having that same skip-beat action that drives steelhead crazy. The Mag Lip 3.5 quickly revolutionized the steelhead plug-fishing arena, and guides couldn’t buy enough of these lures to fill their boxes.

He anchors up in steelhead migration lanes, sets out the plugs of his choice, and then places their prospective rods in their rod holders.  When a steelhead attacks one of these lures, they hit it with savage abandon.

So, how do you find these steelhead migration routes? It’s really quite easy.

First, you will want to find water that is between 3- and 5-feet deep.

Second, set out your plugs on an inside turn.

Third, look for a few willows lining the bank.

Fourth, and this is extremely important, the 3- to 5-feet of water in which you choose to run these plugs should be running between 2.0 and 2.3 miles an hour. Note, this is the same speed in which you would be trolling the Rogue bay with a spinnerbait rig.

The only difference is that you are using the speed of the river in place of trolling.  To ascertain this invaluable water speed, simply motor over toward your chosen 3- to 5-feet of water and use the water speed feature on your depth finder to determine the water speed.

When you have established contact with 2.0 to 2.3 mile hour water, remember where that spot is because this is where you are going to be running your plugs.

Fifth, look for a current seam or multiple current seams going through your chosen stretch of water.

Sixth, anchor up your boat so that its rod holders will be 40 to 45 feet above this golden spot. And, remember that the angle of your rod will bring the lure toward the boat a foot or two, so be very mindful of this facet when you evaluate this distance.  Set out your plugs so that they will run between 40 to 45 feet behind their holders, place your rods in their holders and you’re good to go.

Anderson likes to run the Mag Lip 3.0 on the inside, softer water, and runs the Mag Lip 3.5 in the outside, harder 4- to 5-feet of water.

I believe that the reason why the fishing in this area has been so good is because steelhead from both the Applegate River and Rogue River systems have to bottleneck through this area first.  It is funnel fishing in its highest form.

In addition, Cole Rivers Hatchery (the hatchery that raises these steelhead) is the only hatchery in Oregon that raises Rogue River and Applegate steelhead smolts for two years.  When these smolts are finally released into the wild, they are in effect, fair-sized trout, having an increased advantage against predation. These are the author's favorite plugs that catch the most steelhead on the lower Rogue River. Shown are Brad's Wigglers and Wee Wigglers as well as the Mag Lip 3.5 and 3.0.
Photo Credit: Larry Ellis There is nothing than could top the smile from a happy lad after catching a winter steelhead on the lower Rogue River last week.
Photo Credit: Memory Makers Rogue River Guide Service