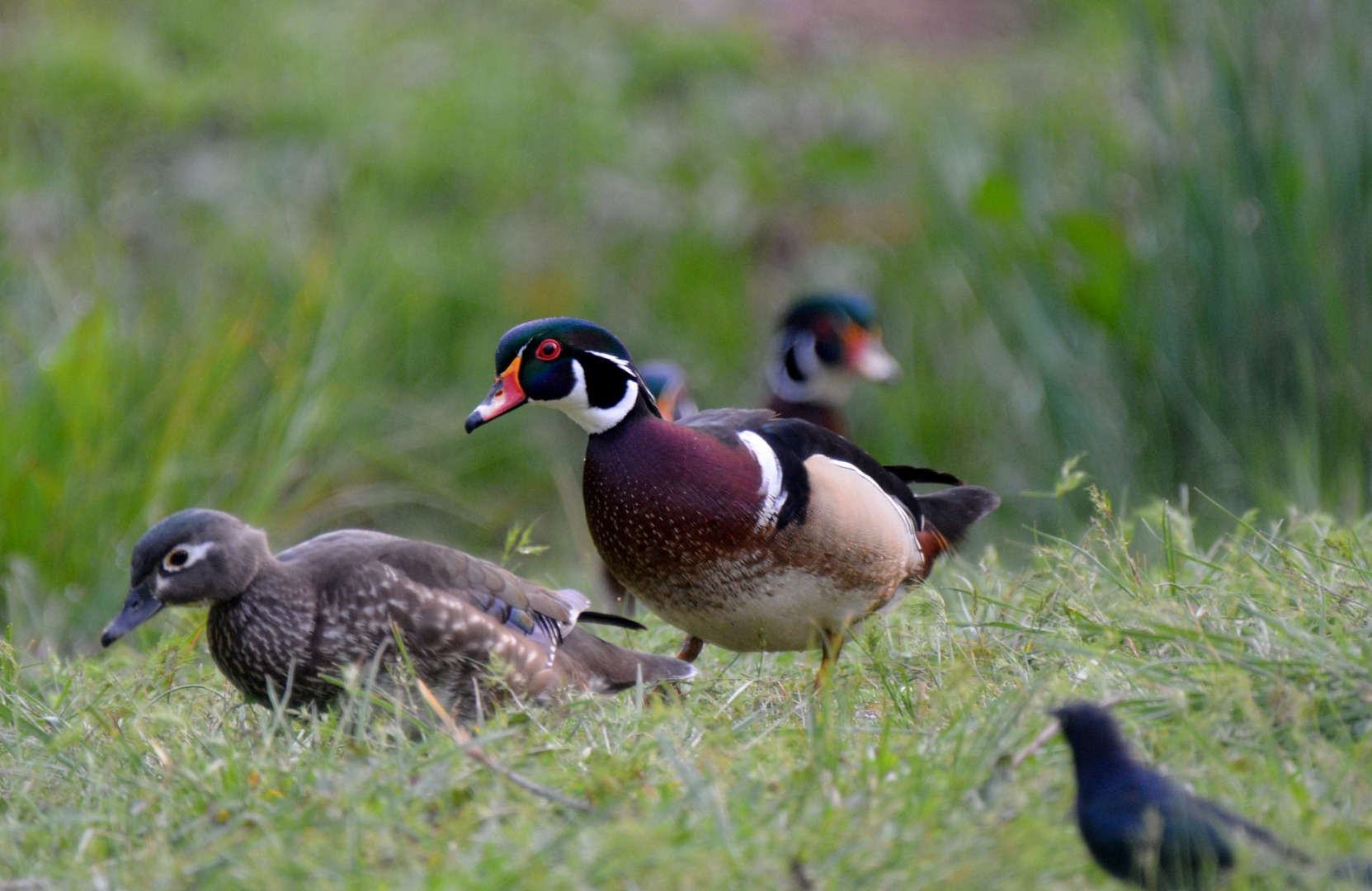 Wood ducks will leave the safety of the water and the trees to march overland in search of acorns, seeds, nuts, berries, and insects. Photo by author.

On most winter evenings, Kathy and I hike to the hilltop near our home in the oak woodlands of Northern California. We usually leave about 4:00, and if we don’t stop to talk to anyone or get sidetracked, return to the house before the sun goes down. One quiet evening late last December, we heard the whistling of wingbeats overhead as we walked up the driveway at the end of our one-mile trek.

“Woodies!” I whispered, pointing to a flock of low-flying ducks. Even in the dim light, I easily identified our visitors as wood ducks: both sexes have white breasts, and they carry their heads above the level of their bodies in flight.

Standing motionless, we watched several more flocks, each containing between ten and twenty birds, circle our house and disappear beyond the rooftop. I motioned for Kathy to follow me. Quietly, we placed our backs against the west wall of the house and sidestepped our way toward the backyard. Remaining beneath the eaves, we turned right, slid along the back wall, and stopped.

Our home is blessed with a small forest of old-growth blue oaks, the closest of which was a car’s length from our hidden location. Flock after flock of the secretive birds swooped down from the night sky and landed in the treetops. “Listen,” I whispered, looking over at Kathy. I spotted a glimmer of excitement in her eyes.

“I hear ‘em,” she whispered back. The entire yard was bustling with the sounds of ducks fluttering from branch to branch and jostling for position.

Having encountered wood ducks more times than I can remember, I can safely say that they prefer to hang out in quiet, slow-flowing streams bordered by overhanging vegetation. Unlike most wild-duck species, woodies are almost as comfortable perched in the branches of oaks and sycamores growing in the riparian zone as they are sitting on the water. On rare occasions, I’ve seen them perched on wooden fences, bridge railings, and even power lines.

Female wood ducks nest in tree cavities, rather than on the ground. They will also make themselves at home in nest boxes if the boxes are properly constructed and placed in suitable locations. Over the decades, untold numbers of nest boxes have been built and strategically located by wildlife biologists, refuge employees, private landowners, sportsmen’s groups, conservation organizations, boy scouts, and nature lovers.

Just when we thought the show was over, something remarkable happened. Bird after bird flew down from the tree branches and landed on the ground. The cold night air came alive with the squeals, clucks, and squeaks of a hundred ravenous ducks—all marching like web-footed soldiers in our direction.

“They’re eating the acorns,” I whispered.  During periods of drought, when our oaks are struggling to survive, these wildlife friendly trees have produced  bumper crops of acorns; at times, so many acorns have lain on the ground, I’ve slipped on them while walking across the yard. Our local wood-duck population had apparently discovered this treasure trove of available nourishment and arrived to reap the bounty. Equipped with powerful gizzards that crush and grind hard-shelled food items into tiny pieces, wood ducks swallow acorns whole.

Partially exposed and perfectly still, Kathy and I watched as the chattering flock drew closer and closer. We’re sure to be discovered, I thought. As wary as I know wood ducks to be, they’ll explode into the air, fly away, and most likely never come back. Much to our surprise,  the preoccupied ducks turned left at the corner of the patio, marched within ten feet of us, and continued east toward the largest and most regal of our oak trees.

“I can’t believe they didn’t see us,” said Kathy, grinning from ear to ear.

“I can’t either,” I said. “They seem to know their way around the yard. I bet this isn’t the first time they’ve been here. “

Although the ducks were now out of sight, we listened to their feeding calls as they gobbled up acorns  for the next ten minutes. During that interval, we could hear small numbers of birds breaking  away from the  flock and departing into the night sky. When they’d all gone, Kathy and I climbed the patio steps and entered the house through the back door.

“That was a once-in-a-lifetime experience!” I said, laughing. “They were so focused on acorns, they walked right past us in the dark.”

“I’ve never seen anything like that,” said Kathy. “Do you think they’ll be back?”

For the next several weeks, Kathy and I would turn out the lights just before dark and watch out our back windows. A few smaller flocks returned from time to time, but never in the numbers we had witnessed on that special evening in late December. You can be sure we’ll be watching for our splendid night visitors again this winter.

If they return, you’ll be the first to hear about it. Opinions vary as to which North American duck is the most beautiful. The spectacularly colored drake wood duck is always near the top of the list. Photo by author. Unlike most wild-duck species, woodies are quite comfortable in the branches of oaks and sycamores. On rare occasions, I’ve seen them perched on wooden fences, bridge railings, and even power lines. Photo by author. Wood-duck pairs, like this one, will search for a tree cavity in which the hen can make her nest. Photo by author. Hen wood ducks generally lay between ten and fifteen eggs. This may be nature’s way of assuring that at least some of her ducklings survive. Predators abound and include bass, bullfrogs, herons, egrets, domestic cats, ravens, crows, magpies, jays, hawks, owls, raccoons, and foxes. Photo by author. This is the oak forest in our backyard that provided acorns for our wood-duck visitors last December. Photo by author.