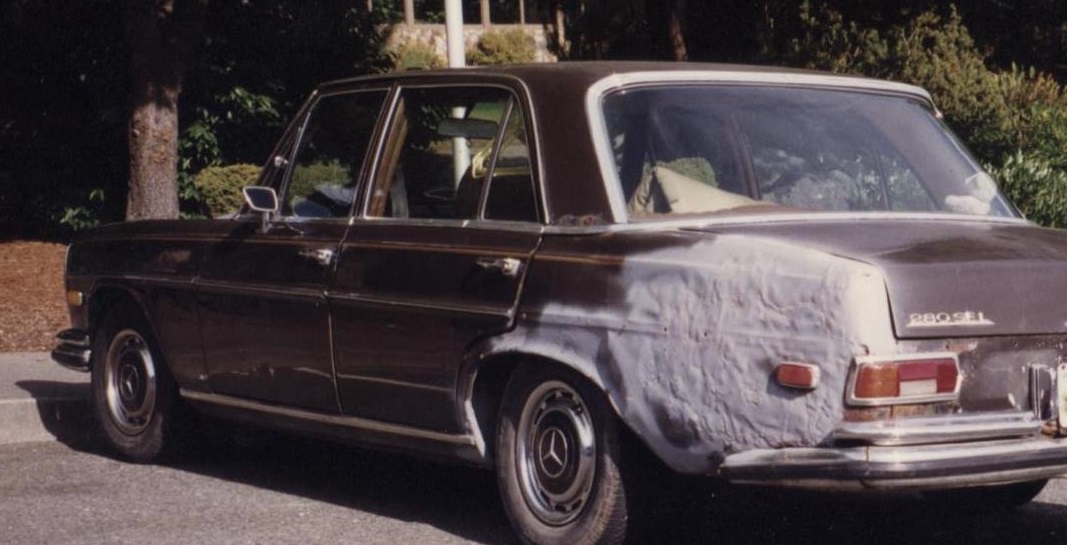 From time to time I warn people about scams that occur with vehicle repairs.  When the economy is poor the scams become more prevalent. The fires this year have given the scammers another opportunity to take advantage of a hurting populace barely starting the process of recovery.  Vulnerable to the promise of saving a few precious dollars, some will be easy prey for the promises of a con-man: The promise of very cheap repairs, with little or no visible equipment, no business location or license (and the con-man often admitting such), as the reason they can provide such cheap prices, and usually requiring cash or check up front, made out to “cash.” With a conman, the price is the promise of a bargain too difficult to pass up.

Here are a couple of clues to look for to see if the damage estimator understands fire damage repair.  Paint that is blistered or burnt away will always cause metal buckling, if minor it will require repair.  If the fire is large and the vehicle is exposed for an extended period, buckling of the metal will occur. If the buckling is large or the heat has caused the metal to be brittle, the panels will have to be replaced.  This condition often also has heat damaged glass and plastic trim melted.

I remember years ago, I wrote several estimates on fire damaged vehicles.  The first vehicle was already repaired, but cracking had occurred in the body filler.  Grinding off the repair to reveal the bare metal revealed the metal had gotten too hot and was brittle.  I tested the metal with a few hammer blows. It bent easily, and proceeded to make the crack longer. Metal affected by overheating cannot be welded. The area must be cut out if possible and the section replaced or most often the entire panel replaced.

The second vehicle was a dark colored vehicle.  The majority of the damage was on one side. To the untrained eye it looked like the paint had just lost its shine and become a very dull, matt finish.  I ran my hands over the panels and told the owner the panels were warped and would require body work. The owner said they could not see the warping. I explained, “But you will after the surface is painted and shiny again. I could feel the warping with my hands”.

A few weeks later the owner of the vehicle stopped by to show me the vehicle and see if there was anything I could do. He already had the vehicle painted and the shiny paint accentuated the warped panels. It was obvious for everyone to see.  The vehicle had been damaged in a major incident and had now lost value.

Scammers also show up during the Christmas Holidays.  People are more susceptible at this time of year to the needs of others and more generous to help those in need. Especially if the person is trying to earn money and not just looking for a handout. Scammers know this and often identify themselves as “out of work, looking to make ends meet until they get a job offer.”  The definition of a scam is; “A Fraudulent or Deceptive Act or Operation.” It is a dishonest way to make money by deceiving people.

It has been reported in the paper that several scammers for home fire damage have been arrested in the Redding area.

A listener to our radio advertising sent us this picture of his car (see Cover photo), after a scammer told him he could fix the dent.  This picture was posted in the waiting room on the victims request, with the understanding we would display it, to protect people from scams like this.  It was displayed for 10-15 years then put in our album for customer viewing for many more years.

The scenario:  Typically the scammer will stop you in a public parking lot and even the driveway of your home.  He identifies himself as an “out of work vehicle body repairman.” He just happened to notice the dent in your car and can fix it right at your home for only about a third of the amount of an established shop.  He says, he has many years’ experience and has all his own tools. Often the scammer will hammer on the dent for 30 minutes or so, then ask for an advance so they can go buy supplies to finish the repair. If the advance is large enough, you will not see them again.

ATV and RV owners; should you be concerned?  These vehicles are also scammed. With so many super glues now available, owners of ATV’s have brought in fenders and gas tanks with glue repairs only to be told their fenders are no longer flexible and will easily break. Gas tanks will leak.

RV owners are often scammed on scratch repair where unknown materials were used to fill the scratch.  One motor home I inspected was a light cream color. The scratch was painted over with red nail polish.   The owner, a lady was told the body shop would finish sanding before painting. She told me she was intimidated and paid the scammer to leave because he became irritated when questioned about the quality of the work.  I’m sure she could see the painting was done with a nail polish brush. It certainly was obvious to me. I suspect irritation is often used to intimidate vehicle owner to pay.

Decals on RV’s often fade or turn chalky.  This is often a target for a scammer to apply a “restoration” product that will only last a very short time.

Here are some helpful hints to consider:  A State license is required to do body work.  In the city limits a business license is also required.  There are other concerns. Is it a violation of your homeowner's insurance policy to do body work at your home?  Are environmental laws being broken because materials being used are hazardous? Fire Department regulations might be broken also.  What about Workman’s Comp Insurance if the scammer is injured on your property.

For several years trade magazines have reported there is a shortage of people getting into the collision repair occupation. Qualified workers are eagerly sought by employers. Legitimate collision repair craftsman work out of store fronts, (shops with an address and prominent signage) not in parking lots and homeowner's driveways. Some businesses do minor touch up  services and are allowed at vehicles owners homes… if the proper licenses are issued.