What Can I Do About Rattlesnakes? 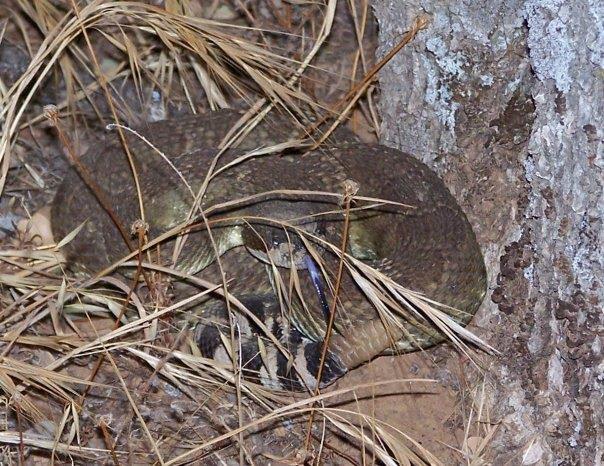 Question: The late spring and early summer always seem to bring out rattlesnakes on my property. I have two dogs and I am worried about them and myself. I have heard you need a fishing license to kill one, even if it is on your own property. Is that true? (Linda)

Answer: Spring and summer are peak seasons for rattlesnake activity. Like all reptiles, rattlesnakes are ectothermic (“cold blooded”) and cannot regulate their internal body temperature, making them sensitive to outside temperatures. To protect themselves from the cold, they often hibernate in the winter and emerge in the spring to eat and warm themselves.

When the weather warms up, they are also susceptible to overheating. As a result they are most active at dawn and dusk, even night during the hottest part of the summer. During the day, they will take refuge in burrows and rocky crevices or any suitable cover they can find to protect themselves from the heat.

Although rattlesnakes may be killed without a license, other approaches may be better. In some cases, conservation status of the species could be an issue (for example, the red diamond rattlesnake is a species of special concern in California).

And frequently, killing a single snake is a short-term solution. Prevention and awareness are much more effective. Keeping tall grass mowed and brush piles removed will help keep rattlesnakes from getting too close to your home. Close off access points into your garage and home. Consider rattlesnake-proof fencing.

Precautions should also be taken when walking about in rattlesnake habitat. Wear closed-toe shoes or boots and long pants. Know that snakes are active at night during summer hunting rodents. Teach children to leave snakes alone.

Rattlesnakes are normally not aggressive unless provoked and are an important part of a healthy ecosystem. However, all rattlesnakes are venomous and bites can be potentially dangerous (in some cases, fatal) to humans and pets. For this reason, we emphasize caution, but keep in mind that most rattlesnake bites occur when snakes are being threatened or people are attempting to handle them. Rattlesnakes will display a series of warning behaviors such as crawling away, coiling and using rattling sounds. Biting is typically a last resort or in quick defense.

Off-leash dogs roaming in rattlesnake habitat are at risk, as they can roust up a snake while exploring smells, holding their nose to the ground. Bites on the leg can result when a dog inadvertently brushes a snake – the same can happen to unsuspecting people walking through fields and grasslands. We recommend speaking to a veterinarian about whether a rattlesnake vaccine is an option for your dog.

If you see a rattlesnake in its natural habitat, give it a wide berth and it will usually crawl away or try to hide. If you find it necessary to remove a rattlesnake from your home or property, you may want to seek the assistance of a private wildlife service. People can easily get bitten trying to kill or remove a rattlesnake on their own.

Carrie Wilson is a marine environmental scientist with the California Department of Fish and Wildlife. While she cannot personally answer everyone’s questions, she will select a few to answer each week in this column. Please contact her at CalOutdoors@wildlife.ca.gov.