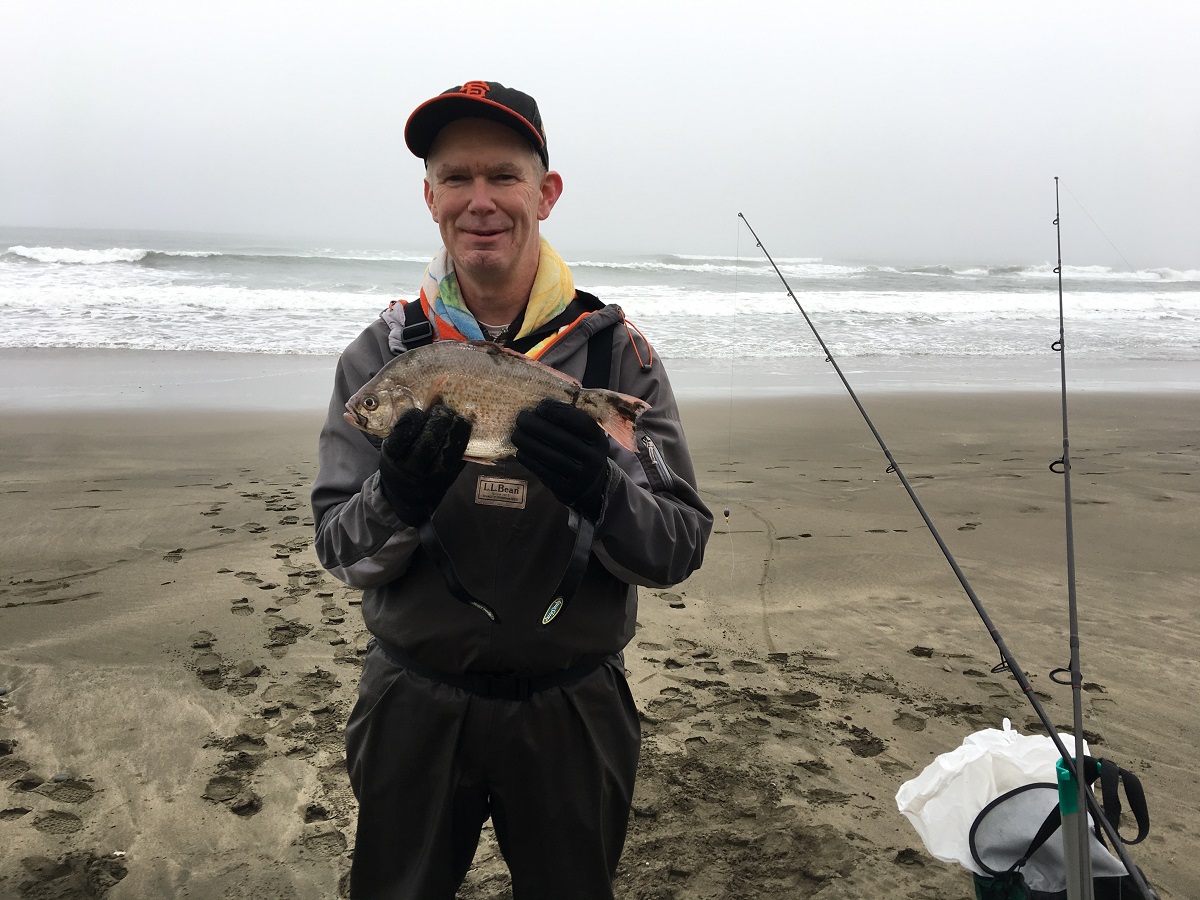 I live pretty close to Ocean Beach, San Francisco.  It’s actually only a short, 10 minute walk from my house, so it’s often going to be the place you’ll find me fishing on a regular basis.  Striped bass can be found here during the late-Spring and Summer months, but most of the time the fish to be relied upon to show up on any given day is your good old surf perch.  Mostly of the Barred Surf Perch variety (a.k.a., “BSPs”), these fish don’t disappear from the shoreline, ever.  One might find a Red Tail or Walleye perch, as well, but the BSP produces the greatest numbers along this beach.

The BSP’s primary food source is the lowly sand crab (a.k.a., sand fleas or mole crabs). Not surprisingly, the sand crab has long been an oft-used bait when fishing California beaches for surf perch.  Perhaps even more popular at the moment for perch fishermen (and fisherwomen, I know enough to know not to ever leave them out!) is the seemingly ubiquitous Berkley Gulp! Camouflage Sandworm.  This soft bait is scented, reportedly biodegradable, and has been called “camo crack” on many an occasion.  I use either a 2” or 4” camo sandworm and it’s basically a calling card for perch.  If perch are in the waves and you toss this worm out, you should soon be getting hits.

When surf perching, I use a Carolina rig with a 1.5 oz. sliding sinker and a #4 baitholder hook. Some point out to me that perhaps I should use a fish-finder sliding pyramid weight to slow down the rig when in the strong wash of the current.  Maybe, but I like to find that sweet spot in the waves where the current going right meets the current going left.  If I threw it out at 10 o’clock degrees, my rig should wash over to the right and then not go too far over past 1 o’clock degrees. It’s not an exact science.  As long as I’m not fishing between two others, I feel like I get plenty of hits as the rig makes its way across the 10 o’clock to 2 o’clock degrees from which I casted.

Anyway, I feel pretty good about this Carolina rig/Gulp! Sandworm combination to the point where I’m actually getting a little bored out there wading in the waves of my local beach catching surf perch.  So when I read recently somewhere else out there on the Internet about another soft bait that seemed worth trying out, I was very interested.  This bait was from the Z-Man Crusteaz series of 2” soft baits.

They’re made of a durable soft plastic called “ElaZtech” and  the “motor oil” version looks like a mutant cross between a sand crab and a sandworm--the best of both worlds!  “Hey, you got your sand crab mixed in with my sandworm!” “Well, you’ve got your sandworm mixed in with my sand crab!”  Sound familiar?  Anyway, they’ve been developed for either salt or freshwater--anywhere where crayfish, sand crabs and ghost shrimp can be found.

I soon found out personally that perch really like them! Major note, though:  you’ve got to be careful on how you store them as the “ElaZtech” material can melt into a blob if they touch your regular plastic soft baits and even warp certain types of plastic containers.  I haven’t done much research in this area, so for now I’m keeping my Crusteaz in a small glass jar soaked in Gulp! Juice.  If you get some, too, definitely read the warning label on the package on how to properly store them.

Well, I went out to Ocean Beach this past Saturday morning to try the Crusteaz out.  I brought my entire bait supply (a six-pack of Motor Oil and a six-pack of Watermelon Red), but I ended up only using just one Crusteaz for the entire four hour fishing session.  That’s how durable it was!  One bait, eight perch, four hours and who knows how many casts and hits.

I remember catching a small BSP on my fourth cast.  I wasn’t expecting such a tiny guy, so I threw him back and remained skeptical about this new bait.  Perhaps about 5 minutes later I felt a huge hit, but on the retrieve, I had only yanked up some kind of paper trash.  That didn’t feel right--maybe the fish was playing a joke on me?  Well, the joke was on him because five minutes later, I felt a similarly huge hit and this time I reeled in what turned out to be a 14” Red Tail that weighed in at almost 2 pounds!  Wow, now I’m highly enthusiastic about this Crusteaz bait.

I spent the next 3.5 hours enjoying the morning pulling in a fish here and there.  I threw back two more fish--one which had been another Red Tail, but was only 10 inches long (the legal size for Red Tail is 10.5 inches--don’t forget to bring a tape measure for these guys!).  I started making my way back to where my car was parked and started fishing a new section of the beach.  Three casts and three more fish!  One was small-ish, but the other two were 11 inches each, so good enough for my mom-in-law.

While fishing this new area, I recall from previous sessions that there were some underwater pilings leftover from an old pier that used to be there decades ago.  I had lost a Kastmaster rig last year to one of these pilings and didn’t want to lose my new bait (even though I did have more).  Well, sure enough I must have found the piling again because I got snagged and lost my leader, hook and bait.  Fine enough, I was done at that point and called it a day.

So, more about this bait.  The "ElaZtech" material reportedly reacts with PVC-based plastics, so that's why the bait can't be be touching other plastic baits, which are often made with PVC-based plastic or be stored in PVC-based containers.  Not all plastic containers have PVC, according to a Z-Man video I watched. The spokesman said that a Flambeau "K Series" container can be used to store them safely.  I'm still trying to find out if I can store them in the same Gulp! plastic container I often use or not.  I suspect not, but am willing to do the experiment.  That would be ideal for me because there’s no glass involved.  And it would be nice to keep alongside with the Berkley Gulp! Camouflage Sandworm, which i think should be fine since the sandworm is supposedly biodegradable, which I assume means it's not made with PVC-based plastic.  Again, I need to experiment a little.

I learned another good idea on the Internet (I’d give credit to the specific person, but I’m not sure if he’d rather just stay anonymous), which is to use a straightened out hook that can be used to puncture through the bait and can then be used to draw the leader line in and then out.  Instead, I chose a sturdy sewing needle, since straightening out a hook seem like a lot of work when a needle would work just as well and would also be perfectly straight.

Here are the complete steps on how I rigged the Crusteaz bait to my rig:
First, I'm using a Carolina rig with a 1.5 oz. sliding sinker, bead, barrel swivel, 2 foot fluorocarbon leader, and #4 baitholder hook.

1. Put a sliding sinker, then a bead up the mainline.  Palomar knot the mainline to one end of a barrel swivel.

2. Tie a #4 baitholder hook (or the size/hook of your choice) to a 2 foot leader using a Palomar knot.  Because it’s a very small eye, you will have to use that “cheat” that allows you to Palomar knot the hook by first putting both ends of the leader line through the hook eye at the same time and then pulling the leader through it.  Then adjust the leader line (one part will be shorter, the other longer), so that you can make your Palomar knot.

3. Now once you have your hook on one end of the leader, tie the other end through a sewing needle with a simple knot.

4. Puncture your Crusteaz bait into the mouth (where the long claws are) through the body and out the butt with the needle.

5. Pull your leader through the bait bringing the hook’s eye up to the mouth (where the long claws are). If you can push that hook eye into the mouth and plant it there, that’s probably ideal, but you don’t want to pull the hook into the mouth and body any farther than that.

6. Remove the knot on the sewing needle and then Palomar knot the leader to the barrel swivel that’s already attached to the mainline.

I think using a straight sewing needle is key because the "ElaZtech" material is very tough (which, again, makes it very durable) and would be too difficult to try and put a hook through one end of the bait’s body and come out the other end perfectly.

The easier alternative is to probably just hook through the butt and then let the hook come out of the middle of the body the way we normally bait a hook using a 2” camo sandworm. This might, however, affect the “action” of the long claws (which flutter about when being retrieved), and definitely affects the presentation of the hook (partially buried in the body vs. being fully exposed), but I’m not sure if the difference is meaningful or not.


So, the end result of my first time using the Z-Man Crusteaz was that I had caught eight perch and kept five fish.  My biggest was 14” that weighed 1 lbs. and 15 3/8 ounces (just shy of 2 pounds).  The total weight of all five fish was over five pounds, so not a bad average where many BSP’s weigh in at well under a pound.  One bait lasted me 4 hours, which would have lasted longer had I not snagged and lost it.  I’ll probably keep using the Motor Oil Crusteaz on my next outing, but will eventually try a Watermelon Red (the Gudgeon version looks like worth trying, as well).  And, when the stripers eventually return to Ocean Beach over the next few months, I really wonder if I’ll be able to snag a few with this Crusteaz?  I know that freshwater bass love them based on the videos I’ve watched, so a striped bass’ brain, hopefully, will make the same decision and take the bait as did his freshwater cousins!  I’ll definitely write about that if and when this happens!

So, the moral of the story is when you get a little bored at doing the same thing over and over, try and find a new way to do that same activity (works in marriage, your job, life in general, too!). I love surf fishing and there are so many different ways to do it, so consider getting out there and trying a different way at getting hopefully similar results (or possibly even better results--who knows?).  The upside of discovering a new approach that you can keep on using year after year is way better than the downside of getting skunked once in a while. A close-up of a Crusteaz.
Photo Credit: Jerry Back Be careful how you store them.
Photo Credit: Jerry Back My crusteaz claims its second victim.
Photo Credit: Jerry Back All right, now everybody get on the scale.
Photo Credit: Jerry Back Looks like we've got a perch party.
Photo Credit: Jerry Back