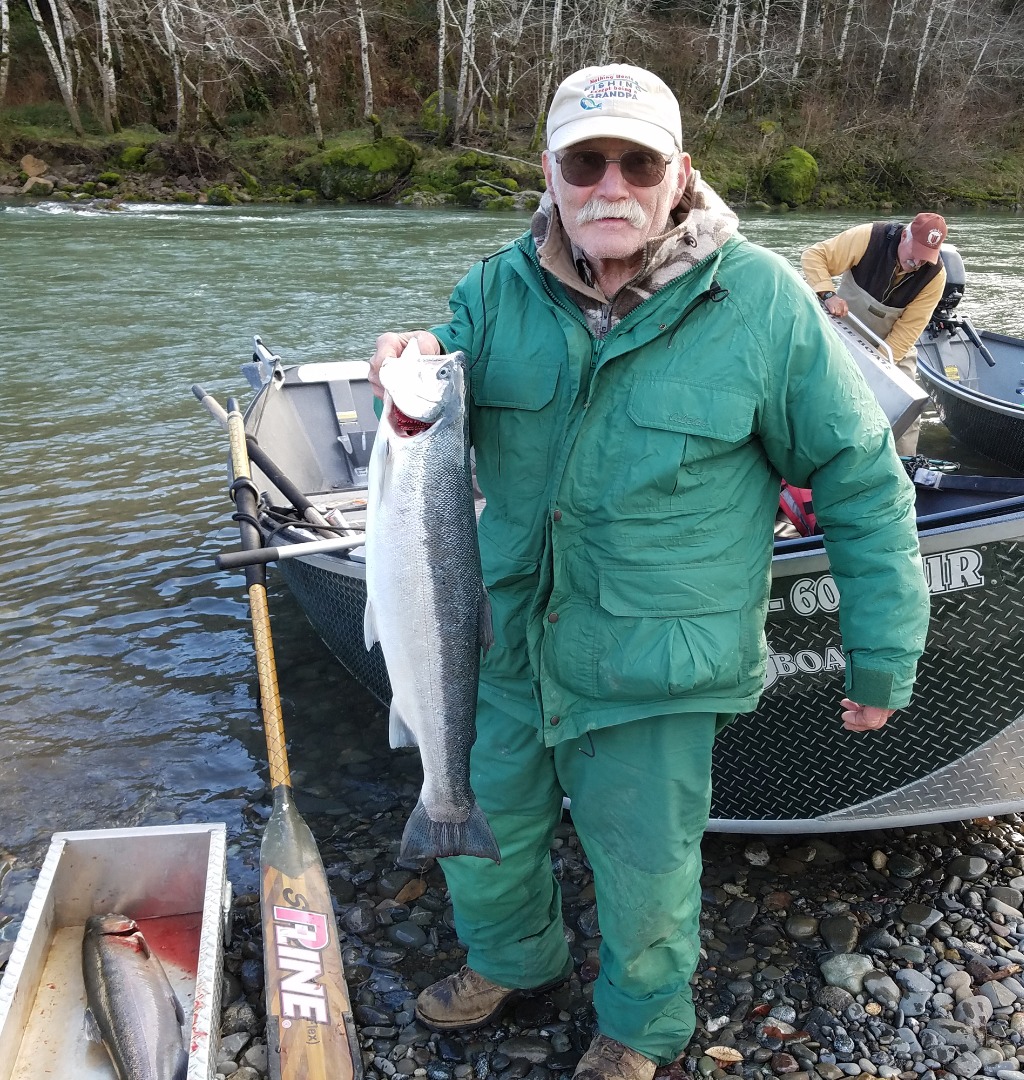 2,200 cfs was the perfect flow for Richard Zanetti from Shasta Lake, California who is holding up one of the steelhead he caught on the Chetco River on January 9 while side-drifting Puff Balls-and-roe with guide Bill Jesperson, photo by Larry Ellis.

Badly needed rain on the southern Oregon coast finally raised the Chetco and Rogue Rivers to where anglers could deploy a variety of steelhead techniques to bring home the chrome.

The Chetco rose to over 2,200 cubic feet per second almost overnight, which created travel lanes for the streamlined locomotives.

Steelhead are spread all throughout the system now, with many anglers putting in at the south fork for a long and juicy float down to Loeb State Park or to Social Security Bar.  But the vast majority of fresh chromers are being caught either from Nook Bar down to Loeb, or from Loeb down to Social.

How good the fishing is depends on who you ask.

For instance, the more-experienced guides who were taking out at Social had at least one fish per person.  I suspect this is mainly because most of the fish I saw last week were hatchery (adipose fin-clipped) fish, and most people released the wild metalheads.  So my suspicion is that those anglers averaged about two hookups per person.

So the aforementioned fishermen would probably rate the fishing as being "fair to good".

Now the folks who were plunking Spin-N-Glos were not doing as well as they had been two weeks previously when the river was lower.  With the river more spread out, it was like trying to find a needle in a haystack.  Which revises the way a person should think about plunking during certain circumstances.

Under normal water conditions favorable for plunking on the Chetco, say between 4,000 cfs to 7,000 cfs, the serious plunker only needs to look for a current seam close to the bank, cast between 4 to 8 feet from the bank and call it good.  Fishermen don't have to worry about drift boats cutting across their lines because on the Chetco, this particular current flow is just too fast for drift boaters to deploy their techniques.

In these places, steelhead will be taking the easy way out by swimming up the slower water on the sides of the river and avoiding the faster, more turbulent water in the middle of the river.

Normally, I never advocate plunking big ol' Spin-N-Glos in drift-fishing or side-drifting water that would range from 1,100 to 1,400 cfs.  It's just not the polite thing to do.  However, there are always exceptions to every rule.

Two to three weeks ago, when the river was near 1,200 cfs, plunkers were making very long casts to avoid the shallow water that had practically no current (frog water), and landing their Spin-N-Glos in the faster, more colored-up water about one third of the way across the river.

It's not rocket science.  Slower current and less surface acreage focuses the steelhead in a much narrower playing field, making the steelhead easier to target.

This narrow range of water flow is traditionally reserved for boaters who are side-drifting or for bank fishermen who are deploying drift-fishing techniques.  But with the river having an avocado-green hue, boaters were avoiding this section of the river and waiting for the river to clear up.

And bank fishermen could not make long enough casts with their drift-fishing gear, even though they looked like the poster buoys and gulls from the cover of "Waders R Us" with their fancy chest waders.

This is the only time I would ever advise bank fishermen to plunk in "drift-fishing" water.  Remember this little hint and watch your hookups rise.

But now anglers don't have to worry about low water, at least for a little while yet.  As of Thursday, the Chetco was blown out and flowing at 7,300 cfs and still rising.  With partially sunny skies predicted over the weekend, the Chetco will be dropping and clearing, allowing for possible perfect plunking conditions.

With fish biting well on a dropping Chetco river, I predict that this weekend will be good for those plunking the number 4 Spin-N-Glo.

As soon as the river drops to 4,000 cfs, which should be around Martin Luther King Day, drift boaters will be putting in at places like the south fork, Nook Bar, Miller Bar and Loeb State Park.

Most boaters will be deploying side-drifting techniques, with a few folks pulling plugs or back-bouncing roe.

Lower Rogue River Kicking Out Steelhead
Due to higher and more turbid water conditions, both anglers who were fishing from jet sleds and bank anglers saw an increase in steelhead hookups on the lower Rogue, in places from Huntley Park downriver to the old mill site. And although the fishing is not off the hook, it is definitely a sign of improvement from the last two weeks.

"We got rain; we got color; and we got 'some' fish," said Jim Carey, owner of the Rogue Outdoor Store in Gold Beach last Thursday. "And we had rain the other night too, which gives it a distinct color.  The river started rising, putting a scent out, and now I'm hearing of definitely more fish. That doesn't mean it's really red hot by any means, but we are seeing fish move in, and both bank fishermen and boat fishermen are getting some."

Carey also mentioned that there are some hatchery steelhead in the mix as well, with the majority of boaters using the 3-inch or 3.5-inch Mag Lip. With the water predicted to be rising and getting murkier, anglers will transition from the 3-inch to the 3.5-inch lure.

"They're also catching them on HotShots, with size 30 being the traditional size," he recommends.

For bank anglers last year, Jim Hunt Riffle was the place to be if you wanted to put your pedal to the metal, but this year, bank anglers have been favoring Huntley Park, Orchard Bar and Lobster Creek, with number 4 Spin-N-Glos being the favorite size.

One of the things that they now do every year is to carefully and meticulously record information from collecting spawned-out salmon carcasses.  Armed with long spears and eagle eyes, OSCF finds these carcasses in the Chetco mainstem and numerous tributaries, either hanging from trees caused by high-water events, on the bank or in the water itself.

ODFW does not have the work force to record this very important data on this grand of a scale.

"Actually we're doing pretty well this season," said past president Richard Heap of Brookings about this season's sampling.  "We've collected over 200 samples this year, which is more than I thought we were going to get.  But generally we saw fish and they did actively spawn, so that's an encouraging thing. So the bottom line is the number of fish in the river were probably close to what was forecast - between 1,700 to 1,800 adults that came back to the river."

Heap says that the OSCF has one more day where they are going to mop up the final salmon carcasses, at the whim of the river's flow of course.

"Basically we're pretty much done," noted Heap.  "We're going to go next week, probably on Thursday.  So here's how we're cutting the last day.  If the river's below 2,000 cfs, we're going to collect salmon carcasses. If it's above 2,000 cfs, then we're all going to fish for steelhead to donate to the brood stock program."

OSCF invites the public to attend its monthly meetings that are held on the third Wednesday of each month at the Chetco Community Library Conference Room.

Next week's column will feature some of the spectacular events that this celebrated club will be doing this year.