Fishing Continues to Be Awesome 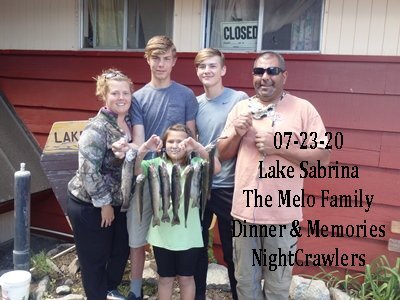 A quick, but very sincere THANK YOU to all who have visited the Lake this year and put up with the wearing of masks, the distancing of six feet, the one group in the store at the time and the lack of stockings, we truly appreciate you.

Fishing continues to be awesome, it’s the catching that leaves something to be desired for some. Those with patience, a bit of knowledge and a lot of luck are still luring fish from the depths of the Lake. NightCrawlers, Salmon Eggs and PowerBait seem to be working for some and getting that bait down deep. It’s been a tad on the warm side and some of those fish have gone down deep. The fish you are seeing schooling by the dam are our Owens Valley Sucker fish – pretty much like the algae-eaters you might have in your aquarium at home.

It was kid’s week at the Lake as they seemed to outdo their parents on catching and don’t forget you need to have that special rod and reel set-up, maybe something like Blake Corathers (age 3) used to catch his 2 pound Rainbow. What was his set-up – why a Hannah Montana pole. When the fish hit the PowerBait, over the side the pole went – they chased down the pole and Blake reeled in his fish! Ezekiel (7) and Jacob (5) caught and released ‘bunches of fish’ using MiceTails and NightCrawler. Chris and Drake Andreozzi teamed up together to land a nice 2-1/2 pounder using Garlic Gulp. Jesse Bridwell had it dialed in – catching 3-3/4 and 2-1/2 pounders using NightCrawlers.

Apparently the bear had made its rounds and was back at the Lake for a couple of nights. Tried to get into the dumpster – that bear trying to open that lid is quite a wake-up noise at 3AM and then again at 4AM. Rick and I were out on the Lake Wednesday and watched the eagle for about an hour (we also caught 3 fish – 1 over by the George Inlet and 2 drift fishing using NightCrawlers).

A bit being done on the Sabrina Basin Trail with crews clearing the trail so the equipment can get to the Auxiliary Spillway to begin repairs. Porta-potties for the crew are set-up in the day hiker parking, trees are tied back to allow the excavator access up the trail without damaging trees and installing waddle for contamination containment. There may be some delays on the trail as crews work, please have some patience and enjoy the scenery.

Fishing etiquette is once again becoming a bit of a problem at the Lake and we don’t like problems. If you come upon someone fishing, please don’t fish right next to them – take a bit of hike farther down and don’t cast over into their spot. Same at the Inlet, there are so many areas to fish on this Lake go find another ‘soon to be’ favorite spot. This is also an addition by one of our customers - “If you have your boat pulled all the way into the Inlet and are hogging the whole inlet how about leaving after everyone in your boat has caught 5 to 10 fish so that others can have a chance. The inlets aren't as big as last year due to the reduced water flow and when you hog the whole inlet for 3 hours while everyone in the boat catches MORE than their limit its pretty rude. We all know that there is a whole big wide lake out there and lots of room but when people are being polite and waiting for inlet access it’s pretty rude to hog it for the whole afternoon.”

Howard the local and loved weather guesser was definitely right about the heat generated ThunderBoomers. The day would start beautiful blue skies and not a cloud up there, it would start getting a bit warm, and then about noon a poof here and a poof there and an hour later no blue sky and you’re hearing rumbles. Never got a downpour at the Lake, but we did get a few sprinkles and cooler weather. Here is the forecast for the week from www.weather.gov (enter Aspendell, CA in the search and scroll down to see the temps).

Scattered showers and thunderstorms, mainly after 2pm. Mostly sunny, with a high near 77. South southwest wind 5 to 13 mph becoming north northeast in the morning. Winds could gust as high as 18 mph. Chance of precipitation is 40%.

A 40 percent chance of showers and thunderstorms, mainly before 10pm. Mostly cloudy, then gradually becoming clear, with a low around 54. West northwest wind 5 to 10 mph becoming south southwest after midnight.

A 10 percent chance of showers and thunderstorms before 11pm. Partly cloudy, with a low around 52. West wind 6 to 13 mph, with gusts as high as 18 mph.

A 10 percent chance of showers and thunderstorms after 11am. Mostly sunny, with a high near 75. South southeast wind 8 to 16 mph, with gusts as high as 22 mph.

Mostly clear, with a low around 47.

Mostly clear, with a low around 47.

Mostly clear, with a low around 48.

Mostly clear, with a low around 48.