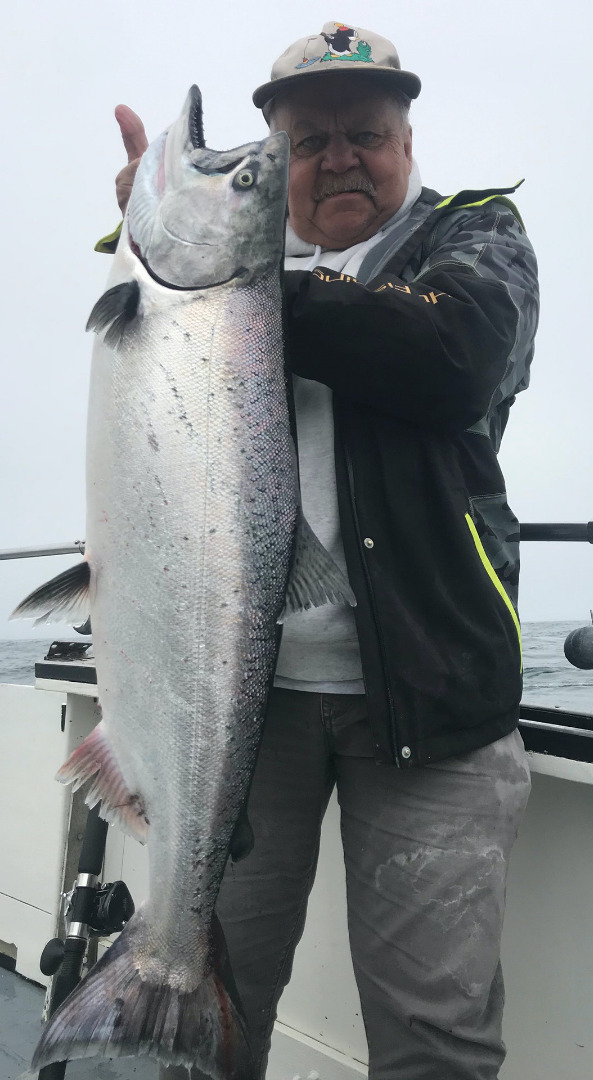 Vacaville resident Darell Odland landed this nice 17-pound king on Wednesday while fishing north of Trinidad. The salmon have finally shown up on the North Coast. Boats fishing out of Trinidad scored limits on Wednesday, and quite a few kings were caught out of Eureka as well.
Photo Credit: Photo courtesy of Tony Sepulveda/Shellback Sport Fishing

Well, it looks like we may have a salmon season on the North Coast after all. After the first month of the season produced basically nothing, salmon are finally starting to show up. The hot spot has been north of Trinidad, near the mouth of Redwood Creek. A handful of private boats found some fish late last week, and the charters have been boating limits since the weekend. “Salmon sign was spread over a huge range from straight out front of Trinidad to as far north as I ventured,” said Tony Sepulveda of Shellback Sport Fishing. “There’s been a band of life from 120 to 190 feet running north and south. Whales, murres, krill and salmon. Action wasn’t wide-open, but midday limits were the norm. Lots of shakers kept things busy while the keepers were a mixed grade. About half were really solid fish, running 10 to 15 pounds.” And the bite seemed to get better as the week progressed. On Wednesday, Sepulveda put in limits of quality kings in just a few hours of fishing. Eureka had been the last remaining port still waiting for the kings to show up. And they finally did on Wednesday. Gary Blasi of Full Throttle Sport Fishing and Matt Dallam of Northwind Charters both landed a fair number of keeper kings working the dumpsite area. This is the first report of any kings being caught out of Eureka, and it’s just what we’ve been waiting to hear.

Marine Forecast
Conditions for the weekend are looking plenty fishable as the winds will be coming out of the north, blowing 5 to 10 knots. Friday’s forecast is calling for N swells 3 feet at 5 seconds. On Saturday, waves will be out of the NW 4 feet at 9 seconds. On Sunday, winds will be out of the N 5 to 15 knots with waves out of the NW 5 feet at 6 seconds. These conditions can and will change by the weekend. For an up-to-date weather forecast, visit www.weather.gov/eureka/ or https://www.windy.com. To monitor the latest Humboldt bar conditions, visit www.wrh.noaa.gov/eka/swan. You can also call the National Weather Service at (707) 443-7062 or the office on Woodley Island at (707) 443-6484.

The Oceans:
Eureka
Pacific halibut remains the top story out of Eureka after another week of wide-open fishing. “I’ve never seen the bite hold on this long,” said Tim Klassen of Reel Steel Sport Fishing. “It’s been limits every trip. The fish are still running small, from six to 25 pounds with the occasional bigger one. There’s fish spread from the 47 to the 54-line in 240 to 320 feet of water. Herring and salmon bellies have been the go-to baits.” As mentioned above, salmon were caught out of Eureka on Wednesday by two of the charters. Reportedly, the grade was excellent and they’re only three miles from the bar. This is the first real solid salmon report of the season.

Trinidad
According to Curt Wilson of Wind Rose Charters, salmon are finally being caught out of Trinidad. “The bite started late last week, with some of the private boats heading north and picking up a few kings,” said Wilson. “Since then, the charter boats have been making the run anywhere from 7 to 17 miles where there’s lots of life. There’s tons of krill, along with lots of birds and whales. There’s been quite a few small ones we’ve had to weed through, but the keepers have been a solid 8 to 15 pounds. The variety of rockfish around the Patrick’s Point area has been phenomenal. The lings are starting to show up as well, we’re getting anywhere from 2 to 6 per trip. We’re also seeing a lot of shorts, which is good,” Wilson added.

Shelter Cove
The salmon bite was wide-open late last week, but has slowed down a little the last few days reports Captain Jake Mitchell of Sea Hawk Sport Fishing. “It got a lot of pressure over the weekend and a lot of the bait moved out,” said Mitchell. “All the salmon action was right inside the whistle buoy where there’s been lots of krill. We’ve been doing well mooching, with fish running from 10 to 30 pounds. Last Thursday we had our limits by 9:30, and on Friday we were done by 8:00 and ended the day on a double. The rockfish bite has been good as well. We did pretty good off the Ranch House a couple days. The wind has really put a damper on things here the last few days as well, and it doesn’t look like it’s going stop anytime soon. We’ve still been able to get out each morning before the wind forces us off the water around 11:00.”

Crescent City
According to Chris Hegnes of Crescent City’s Englund Marine, a few salmon are being caught, but not many. He said, “There hasn’t been much effort on salmon. We had one boat come in with four nice fish the other day, but it’s been slow. There isn’t much sign out there, and the water temps have been on the cold side. The rockfish bite is still going strong, with most boats targeting the reefs. A few Pacific halibut have been caught in 250 feet of water outside of the South Reef,” added Hegnes.

After a really good start to the season, salmon fishing has slowed out of Brookings reports Andy Martin of Brookings Fishing Charters. He said, “Cold water from offshore upwelling has spread fish out. The water temperate was down to 47 degrees, but is rising. Salmon fishing improved further up the Oregon Coast, at Winchester Bay and Depoe Bay, an indication the big schools may have moved north. Albacore were caught in decent numbers this week 60 miles out of Charleston. Lingcod and rockfish have been biting well out of Brookings.”

The Rivers:
Lower Klamath
Ten to 15 salmon were being caught daily in the estuary since the opener, but the number has slowly dwindled. Only a handful of fish were caught each day over the weekend. Fresh kings should start to move in with the tides and start to stack up as the water temperatures are rising to nearly 70 degrees. Anchovies rigged with a spinner blade has been the top producer so far. Best fishing has been on the incoming and a couple hours after the high.

The Rogue Bay continues to be slow for salmon according to Martin. “A few jacks were caught in the past week, but the main run has yet to arrive,” added Martin.