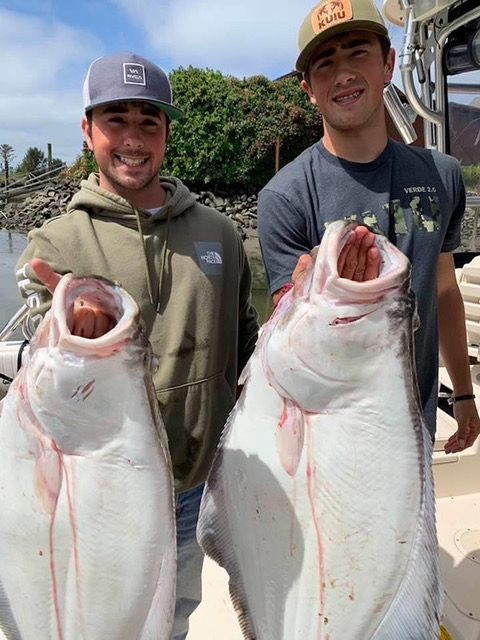 Twin brothers Connor, left, and Logan Petrusha of Eureka landed a nice twin pair of Pacific halibut while fishing out of Eureka on Sunday. The boys were fishing with their father Chuck along the 48-line in 300 feet of water.
Photo Credit: Photo courtesy of Chuck Petrusha

If you’ve been waiting to feel the tug of a big ole’ halibut or a feisty lingcod, Friday looks to be the day. As of Wednesday, the forecast was calling for winds up to 5 knots and waves 5 feet at 12 seconds. Those are ideal for both halibut and rockfish, as well as salmon in Shelter Cove. Ocean conditions haven’t been great this week, but we did hear some encouraging reports from the weekend. According to Tim Klassen of Reel Steel Sport Fishing, quite a few Pacific halibut were caught. “It was a pretty good start to the season,” said Klassen. “We boated limits on Saturday and I heard the fishing was better on Sunday. Most of the boats were right around 48-line in 250 to 300 feet of water.” The rockfish bite at the Cape remains excellent as well. Plenty of boats took advantage of the weather and made the run on Sunday, including Klassen. “The rockfish bite was fast and furious, and they’re really a good grade too. The lingcod didn’t bite as well, but we managed half limits with fish to 20-pounds.” A good way to kick off the saltwater season indeed.

When fishing for halibut, rockfish and salmon (Shelter Cove), or any combination of the three, the more restrictive gear and depth restrictions apply. When targeting salmon, or once salmon are aboard and in possession, anglers are limited to using barbless hooks (barbless circle hooks if fishing south of Horse Mountain) when fishing for other species.

When targeting rockfish, cabezon, greenling and lingcod, or once any of these species are aboard and in possession, anglers are limited to fishing in waters shallower than 180 feet when fishing for other species.

The California halibut bite continues to be hit and miss in the bay. There were lots of boats trying over the weekend, and a few limits were reportedly caught. The freshwater coming into the bay shouldn’t keep the halibut from moving in, but it could slow the bite.

The Redtail perch bite along the beaches continues to be red hot. There are some spots that are typically better than others, but you can catch them just about anywhere this time of the year. Some of the better locations recently have been Table Bluff and Centerville. Conditions look good for Friday, with swells in the 4 to 5-foot range. Both the north and south jetty’s have been fishing well for the past few weeks. Five to six-inch Gulp jerk shads are a popular bait as well as smaller swimbaits. Egg sinkers or banana weights rigged with a herring or anchovies are also catching rockfish and lingcod.

“Bottom fishing has been good out of Brookings on the calmer days,” said Andy Martin of Brookings Fishing Charters. “Halibut are being caught in 180 feet of water off of Bird Island. Surfperch fishing is at its peak.”

Britt Carson of Crescent City’s Englund Marine reports the rockfish bite was good over the weekend. “I heard quite a few limits were caught, with most of the boats fishing near the reefs. The lingcod bite hasn’t been as good. Most of the lings are being caught closer to shore due to them spawning. We haven’t seen much success on the Pacific halibut yet, I’ve heard of one caught so far. Same goes for the California halibut, though not many have been trying. The conditions were pretty bad this week, but Friday and Saturday are looking better,” Carson added.

“We had a decent salmon bite on Friday, but it shut down before the weekend,” said Captain Jake Mitchell of Sea Hawk Sport Fishing. “I only heard of a handful caught on Saturday and Sunday. The salmon bite was mostly around the whistle. There hasn't been as much effort towards rockfish, but I did hear some good reports from some guys who fished around the Old Man. The boat pressure has been fairly light. Our busiest day was Friday when we launched 15. This Friday and Saturday look fishable, but it looks like it might blow back out by Sunday.”

Spring salmon fishing remains slow on the Rogue River, but fish are expected to move in with the latest series of storms according to Martin. “So far, the run has been disappointing, but the river has been low and clear for much of the spring,” added Martin.