“Thrill of All Thrills” 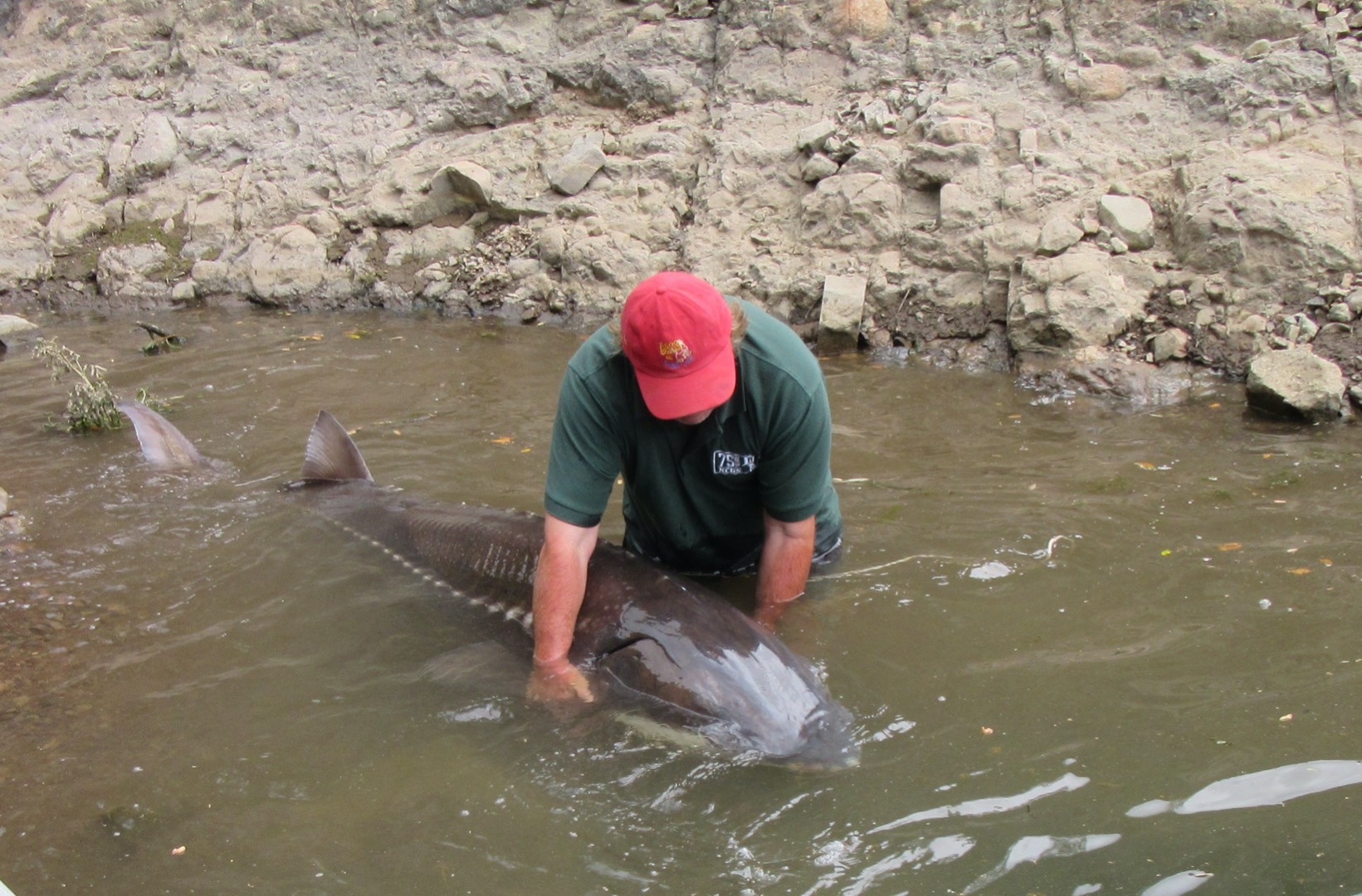 Larry releasing the sturgeon back to the lake's waters.
Photo Credit: Courtesy of Larry Teague

The third of May is a date that Larry Teague of Oroville will never forget.  It has been ten days since Larry landed a fish of a lifetime and he still pinches himself daily as he relives the event, struggling to find the right words to truly describe the event and express his appreciation of the “magical” experience and of the fish itself.

Larry and his friend Robert Kirk ventured east of the Arbuckle campground on the Pit River Arm of Shasta Lake in search of catfish. Larry enjoys angling for all types of fish but that day went in search of big catfish.  Rigging his favorite catfish bait combination of Jumbo Nightcrawler and Bait Shad on his seven foot Ugly Stick and baitcaster spooled with twenty-five pound braid he is still hard pressed to believe the events that were to unfold as something truly big took his bait.

Larry was to do battle with a fish he describes as a “gladiator”, a “true warrior” for over four hours finally bringing a sturgeon to the side of his boat that he estimated to be around eleven feet in length.  Every year sturgeon are hooked and lost in Shasta with many anglers never realizing what actually broke their line, just that they lost something real big.  (Many anglers are unaware that sturgeon even exist in Shasta.) But Larry’s fish was not one that broke off to be the story of one that got away.

As Larry kept constant rod pressure, Robert kept the sixteen foot Klamath boat positioned over the fish in an effort to keep the behemoth out to the rocks and many snags or from spooling the reel.  Larry credits the fact that he was spooled with braid as even giving him a chance to land the fish, thinking that monofilament would have been worn through and broken during the epic battle. Once the fish did wrap around a tree but boat positioning and luck allowed the fish to remain hooked and swim free.  Larry was able to identify his adversary about two hours into the fight being able to see the fish in the clear lake water as it swam just under the boat adding greatly to the anxiety and thrill of the remaining battle.

For the majority of the fight the fish moved upstream, miles in fact, boat in tow. The sturgeon settled into a “hole” where Larry was finally able to work the sturgeon to the surface and side of the boat, anglers and fish exhausted.  Maneuvering the boat to the nearby shoreline Larry was able to step off and use a rope to get a rough measurement of the massive fish. Taking the rope and running it from the tip of the snout to the tip of the tail, putting a knot in the rope at the end establishing the eleven foot length.  On a fish of that size no one will quibble over an inch or two or even demand an exact measurement, as it really doesn’t matter.  This was a fish of a lifetime.

But Larry’s biggest thrill was still to come as he was able to revive and release the magnificent fish back to the lake’s waters. Watching the sturgeon swim away was an experience that Larry described in almost euphoric terms.  The current crisis we are all facing was momentarily forgotten as were all his personal aches, pains and personal trials and tribulations. “Fortunate” was a common refrain as Larry is still bewildered, considering himself “the luckiest man alive”.  I once again congratulate Larry on the accomplishment and on his perspective of the fight and release and his constantly wondering “how his sturgeon is doing now.”

Monty Currier a biologist with the CDFW estimates from the pictures that the sturgeon could be around 90 years old which would predate the building and completion of Shasta Dam.  Are there bigger sturgeon in Shasta Lake? Who knows?  Larry knows he landed one he will never forget.

Gary Heffley has been a valued contributor to MyOutdoorBuddy for over 10 years serving as manager, sales representative and reporter for much of Northern California. He is an avid outdoorsman and loves to fish and write about his adventures. He has a long history in the Sporting Goods field and uses that extensive experience to impart his wisdom in his writing.