Slim year ahead for Klamath and ocean kings 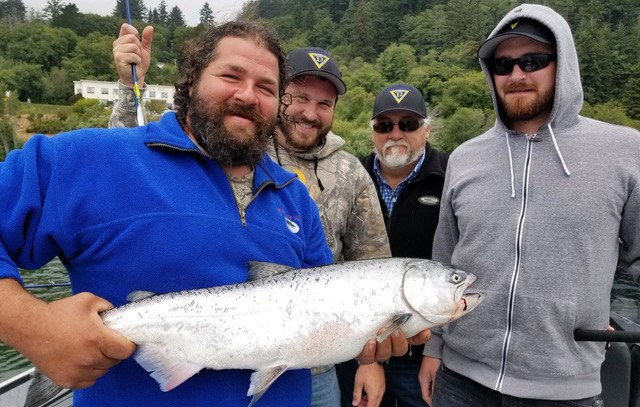 Klamath River sport anglers won’t have as many adult king salmon to take home this fall as ocean abundance numbers are forecasted to be lower than previous years. The number of adult salmon returning to the Klamath in 2019 were also lower than expected. This years quota will range from 1,291 to 801 adult kings for the Klamath and Trinity basin. In 2019, the basin-wide quota was 7,636. Final river quotas and ocean seasons will be decided during the April 4-10 PFMC meeting in Vancouver, WA.
Photo Credit: Photo courtesy of Alan’s Guide Service

Looking at the ocean abundance of Klamath River kings and the numbers that returned to the river in 2019, I’d say we’re pretty fortunate to have any type of salmon season this fall. But we will, and a couple of the alternatives don’t look half bad. The Pacific Fishery Management Council (PFMC) on Monday released three preliminary alternatives for managing salmon fisheries from the OR/CA border to Horse Mountain (which includes Humboldt County). According to the PFMC, 186,600 Klamath and 473,200 Sacramento fall Chinook are said to be swimming in the ocean, which will restrict the North Coast on season lengths and river quotas. The three alternatives currently on the table: June 6 to July 31; or June 11 to July 31; or July 1 to July 19. All three scenarios are the same, two fish per day, seven days a week, Chinook only, 20-inch minimum size.

From Horse Mountain to Point Arena, which includes Shelter Cove and Fort Bragg, the three alternatives are: April 11 to Nov. 1; or April 11 to Oct. 31; or April 11 to Oct. 30.
All three scenarios are the same, two fish per day, seven days a week, Chinook only, 20-inch minimum size.
To view all of the salmon management alternatives, visit https://www.pcouncil.org/draft-council-adopted-salmon-management-measures-tables-for-public-review-from-march-2020-pfmc-meeting/

Final season dates will be decided during the April 4-10 PFMC meeting in Vancouver, WA. The public is invited to comment on the PFMC’s season proposals at that meeting or at a hearing scheduled for 7 p.m. on Tuesday, March 24 at the Red Lion Hotel, 1929 Fourth St. in Eureka. Comments can also be submitted through the PFMC website at www.pcouncil.org.

Klamath/Trinity fall salmon allocations
Not only will the recreational ocean salmon season be restricted, sport anglers will have quite a few less Klamath/Trinity River fall Chinook to harvest this year as well. The recreational allocations, or quotas, as proposed by the PFMC will range from 1,291 to 801 adult fall Chinook in 2020 across the three alternatives. Last year’s basin-wide quota was 7,636 adults. If, for example, Alternative One was chosen, the quota for the Klamath and Trinity basins would be 1,291 adults. Of those, 645 would be allowed for sport harvest from Hwy. 96 bridge to the mouth of the Klamath. From the 96 bridge to Iron Gate, 219 could be harvested. The Trinity would receive 426 adults for harvest. The Spit Area (within 100 yards of the channel through the sand spit formed at the Klamath River mouth) would close when 194 adult kings were taken downstream of the Highway 101 bridge.

The three quota alternatives are not final, but will be decided during the April 4-10 PFMC meeting in Vancouver, Washington Once the quota is agreed upon, 50 percent will go to the lower Klamath basin, 17 percent to the upper basin, and 33 percent will be allocated for the Trinity River. When adopted, these quotas will go into effect August 15, 2020.

The weather ahead
After another week of dry conditions, rain is in the forecast for the weekend. “We should start to see the rain move in sometime late Friday evening,” said Kathleen Zontos of Eureka’s National Weather Service. “The wet weather should stick around through the weekend, and will start to clear on Sunday night. In the Smith basin, three-quarters to an inch and a quarter of rain is forecasted. In Humboldt, we could see a half to one inch. In the Eel basin, they can expect from a half to possibly three-quarters in the mountains. After Sunday, the next week looks dry. There is another chance of rain next weekend, but it doesn’t look like it will be much,” said Zontos.

Brookings ocean report
Bottom fishing has been very good out of Brookings reports Andy Martin with Brookings Fishing Charters. He said, “Lingcod are staging in shallow water to spawn. Crabbing has been slow, with far more females than keeper-size males.”

The Rivers:
Southern Oregon rivers
New steelhead continue to move into the lower Chetco, but fishing is tough because of low, clear conditions according to Martin. “Flows are down to 305 cfs. A few boats a day are still drifting from Loeb to Social Security, and picking off a few steelhead at first light. The Rogue, Elk and Sixes are low, clear and slow for steelhead,” added Martin.

Smith River
The Smith remains low and clear, running at under 1,000 cfs on the Jed Smith gauge as of Wednesday. Despite the conditions, the fishing is still relatively good. There isn’t much boat traffic during the week, but the few out there are catching some nice steelhead. Nearly an inch of rain is expected over the weekend and flows are predicted to bump around 150 cfs. This could be just enough to really turn on the bite. It could also start to bring some of the spawned-out fish down river.

Eel River (main stem)
Down to just about 973 cfs as of Wednesday, the main Eel is still a good option for fresh steelhead. The river is low and clear and lacking current, but there’s fish to be had. Bobbers or plugs are your best options.

Eel River (South Fork)
The South Fork is down to summertime flows, running at 250 cfs as of Wednesday. It’s definitely low and clear, but there are plenty of fish around. If you’re looking for a place to throw a bobber or a spoon, conditions are still good. A slight increase in flows is predicted for the weekend.

Van Duzen
The Van Duzen was under 90 cfs as of Wednesday and looks to be the largest benefactor from the weekend rain. Flows are predicted to rise to roughly 500 cfs beginning on Sunday. If this happens, conditions could be excellent next week. There are still plenty of fish around.

Mad River
Plenty of fresh steelhead are still being caught despite the low, clear conditions. The fish are holding in the deeper holes and slots, and guys fishing stealthy with bobbers, spinners or plugs are doing well. Flows were right around 500 cfs on Wednesday, but it looks like changes are coming. The rive is forecasted to rise to nearly 1,000 cfs late Sunday evening. If that happens, the fishing could bust wide-open.