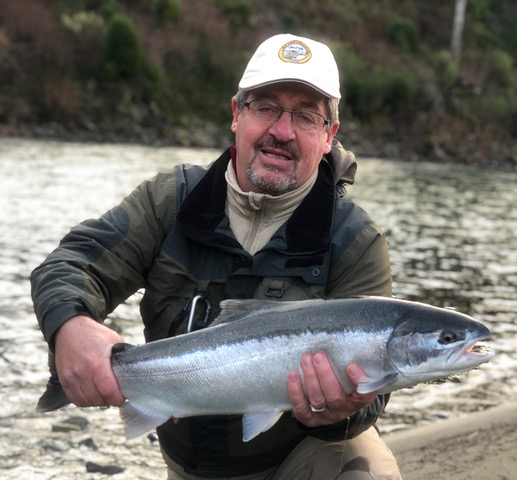 Greg Schroeder of Dayton, OR landed a nice steelhead on a recent trip down the Smith River. With storms lined up into next week, the quick-clearing Smith will likely remain the only coastal river with green water.
Photo Credit: Photo courtesy of Mike Coopman’s Guide Service

If you’re in pursuit of steelhead-green water this weekend, you’ll probably need to head north. With the Chetco on the rise and off color due to multiple slides, the Smith could be the only game in town for quite some time. It looks to be a little unstable through the weekend, but is forecasted to remain at fishable levels. Here locally, all stretches of the Eel, Van Duzen, Mad and Redwood Creek are currently blown out – or will be soon – with very little relief in sight. A chance of rain is in the forecast about every other day for the next few days before a bigger system is predicted to hit next Wednesday. This is great news for the quick-clearing rivers to our north. The Humboldt rivers on the other hand, won’t likely have enough breaks in the rain to drop back into shape in the next week or so. If you’re looking to fill your steelhead fix this weekend, your best bet is to head north.

Weather ahead
According to Kathleen Zontos of Eureka’s National Weather Service, we’ll see a very active weather pattern for the rest of this week and into next. “We’re looking at a series of storms rolling through, with short breaks in between,” said Zontos. “For the seven-day period ending next Tuesday, the Smith and Mad basins could see 3 to 4 inches. The Eel will see anywhere from 1 to 2 inches. These systems will be much colder as well, we should see some snowfall with each one, especially next week. We’re currently tracking a much larger system that could hit the area next Wednesday through Saturday. There’s still a lot of uncertainties around this one and where it will hit on the coast, but we could see some heavy rain that could potentially impact the Eel River,” said Zontos.

Annual salmon meeting coming in February
CDFW’s Annual Salmon Information meeting will be held February 27, at 10:00 a.m. to 4:00 p.m. at the Sonoma County Water Agency, 404 Aviation Blvd., Santa Rosa. The meeting will cover the 2019 ocean and in-river salmon fishing seasons, Central Valley and Klamath Basin river returns, 2020 abundance forecasts, and serves as an opportunity for the public to provide input regarding the upcoming ocean salmon season. Agenda and meeting materials will be posted as they become available. Please contact Grace Ghrist for more info at 707-576-2375 or Grace.Ghrist@Wildlife.ca.gov.

The Rivers:
Chetco/Elk/Sixes
Steelhead are now being caught throughout the Southern Oregon Coast, but none of the rivers are red hot according to Andy Martin of Wild Rivers Fishing. “The Chetco has a decent number of hatchery and wild fish on the lower end, but it has been muddying up with each rain, with slides on the South Fork, North Fork and between Loeb and Ice Box,” said Martin. “The Elk and Sixes are fair for steelhead. Plunkers and boaters anchoring and running plugs also are starting to catch steelhead on the lower Rogue. This week’s rain should bring more steelhead into each system.”

Smith River
Steelhead fishing is still pretty tough on the Smith according to Mike Coopman of Mike Coopman’s Guide Service. “As of Wednesday, there’s not any more fish in the river than last week, but they are starting to pile up in a few places. We’re getting a chance at two or three per day covering a lot of water. It looks like we’re going to get a good shot of rain over the next few days, so we should start to see more fish in the river,” Coopman added.

Eel River (main stem)
The main stem was fishable for the better part of two weeks, but that run is about to be over. It was on a slow rise as of Wednesday and predicted to peak at 5,800 cfs on Friday. The Eel is still waiting for the first real big flush of the year, and next weeks rain could do it. With storms lined up through next week, it will be some time before it’s fishable again. Prior to blowing out, boats were getting zero to a couple chances per trip. There hasn’t been many fish coming through, hopefully the next big rise will do the trick.

Eel River (South Fork)
The South Fork was on the rise as of Wednesday and will likely blow out on Thursday or Friday. The river height should be good by late weekend, but it will likely be off color. Predicted to be right around 600 cfs by Monday morning. Fishing has reportedly been slow for the anglers trying, but a few steelhead have been caught.

Van Duzen The Duzen was rising on Wednesday, and will likely be muddy through the weekend. With more rain in the forecast for next week, it could be a while before it drops back into shape.

Mad River
The Mad has been the most consistent steelhead producer in Humboldt, and even that has been slow. Drift boats starting below the hatchery are seeing one to four adults per trip. The bank anglers are catching a few as well, but it’s not red hot. The river has been in good shape for the past week, but predicted to blow out on Wednesday. Storms are lined up into next week, so it will be quite a while before we see any green water.