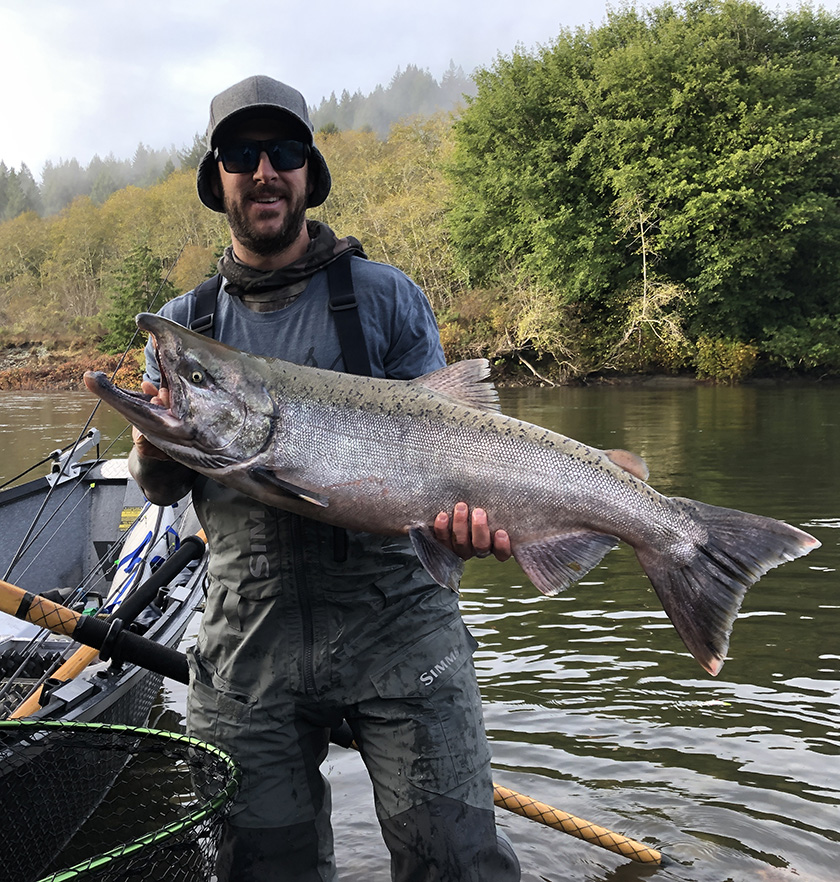 Corey Allen, of McKinleyville, landed a nice late-fall king salmon last November on the Smith River. With rain in the forecast for next week, the Smith and Chetco Rivers could open to fishing over the Thanksgiving holiday.
Photo Credit: Photo courtesy of Kenny Priest

If you see a family member duck out early on Thanksgiving Day, or fail to show up at all, you can bet it’s raining and the rivers are either open or on the verge. After suffering through an extremely dry November, it looks like our weather pattern is about to change. The ridge of high pressure that’s been parked off our coast is finally breaking down, and it looks like a wet weather pattern is on the horizon. According to Kathleen Zontos of Eureka’s National Weather Service, rain could start to fall as early as Sunday night and will stick around at least through Wednesday evening. “Right now, it looks like the heaviest rainfall amounts will be on Tuesday and Wednesday,” said Zontos. “From the period beginning Monday night and ending Wednesday evening, the Smith basin could see an inch up to an inch and three-quarters. Here locally, we can expect to see anywhere from a half-inch up to an inch and possibly more. The models for Thursday and Friday aren’t in agreement as of yet, so we could go either way on those two days,” added Zontos. Whether this rain event will be enough to open any of the rivers is anybody’s guess. The good news is the storm door looks like it’s opening, albeit slowly.

The northern Dungeness crab fishery is delayed until 12:01 a.m. on Monday, Dec. 16, 2019 pending another round of testing tentatively scheduled on or around Dec. 1. If these results indicate good quality and there is no area under an additional domoic acid delay, the fishery will open Monday, Dec. 16, and be preceded by a 64-hour gear setting period that would begin 8:01 a.m. on Friday, Dec. 13, 2019.

Crab are evaluated to compare meat weight to total crab weight to determine whether they are ready for harvest under testing guidelines established by the Tri-State Dungeness Crab Committee in conjunction with tests done in Oregon and Washington. If results indicate poor crab quality, the CDFW director may delay the fishery under authority of Fish and Game Code, section 8276.2.
If the next round of quality testing continues to show low quality crab, Director Bonham has the authority to delay the season an additional 15 days, until Dec. 31. The season can be delayed no later than Jan. 15, which is what happened in the 2017-2018 and 2018-2019 seasons. The first round of quality tests showed Eureka at 21.9, Trinidad 20.2, and Crescent City at 21.4 percent meat recovery. Pots were pulled on Nov. 3.

Nov. 29 and 30 free fish days in Oregon
ODFW is waiving all fishing licensing requirements on the Friday and Saturday after Thanksgiving to encourage people to experience fishing with friends and family during the long holiday weekend. All fishing, crabbing and clamming in Oregon will be free for both Oregon residents and non-residents. No licenses, tags or endorsements are needed on those days, but all other fishing regulations apply. Visit https://myodfw.com/articles/2019-free-fishing-days-and-events for more info.

CDPH Lifts Warnings about Certain Shellfish from Humboldt County
In a press release issued on Tuesday, the California Department of Public Health (CDPH) has lifted the shellfish safety notification related to sport-harvested mussels, whole scallops, and clams (other than razor clams) in Humboldt County. The safety notification was issued due to dangerous levels of naturally occurring domoic acid, also referred to as Amnesic Shellfish Poisoning (ASP), that can cause illness or death. Recent testing shows concentrations of domoic acid are now at safe or undetectable levels for bivalve shellfish other than razor clams.

The warnings against eating sport-harvested bivalve shellfish (including mussels, clams, and whole scallops) from Mendocino County and sport-harvested razor clams in Del Norte and Humboldt counties remain in effect, due to continued elevated levels of domoic acid. For more information, visit https://www.cdph.ca.gov/Programs/OPA/Pages/SN19-014.aspx

The Rivers:
Smith
The Smith remains closed to fishing above Rowdy Creek, but there is enough water for fish to move into the river according to Britt Carson of Crescent City’s Englund Marine. “The little bit of rain we had earlier in the week didn’t do much as far as opening the river, but fish are still moving in,” said Carson. “Some of the deeper holes on the lower river have quite a few salmon in them already. Once we get a good rise, those fish should be able to move into the spawning tributaries and hopefully we’ll see a bunch of fresh fish move in form the ocean.”

Chetco/Elk/Sixes
“Salmon fishing has slowed in the Chetco estuary, and most of the fish have moved into the upper tidewater, which remains closed to fishing,” said Andy Martin of Wild Rivers Fishing. “Heavy rain is expected next week, and ODFW could open the river above river mile 2.2 the first week of December. Seinings for the hatchery program revealed hundreds of kings have stacked up at Social Security Bar. A few salmon are being caught near the mouth of the Elk River, but fishing is slow. Expect a crowd on the Elk and Sixes after next week’s expected big rain.”