The Blessings of the Wild Horse 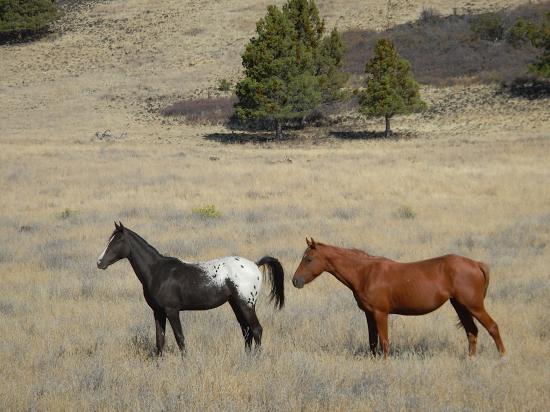 Horses Are Native — Horses originated and co-evolved with their habitat in North America.  Kirkpatrick and Fazio (2008) and MacPhee (2011) have shown that horses meet the criteria of a "native species."  The word "feral" actually means "wild."  However, "feral" is typically weaponized as an epithet.

Approachability v. Domestication — Conflating terms that are not identical, such as "feral" with "non-native" and "ability to work with humans" with "domestication" leads to erroneous conclusions.  A number of wild animal species exhibit approachability to humans.  Rather than being a non-reversible remnant of domestication, it's just their nature.  Think dolphins.  Capture them from the ocean and, before you know it, they're performing somersaults at SeaWorld.

Per Zeder (2012), to be a candidate for domestication, a wild species needs to possess certain "pre-adaptive" attributes, and "the degree to which a species is pre-adapted to domestication is positively correlated with the degree to which its behavior in its natural environment resembles its behavior in its captive environment."  Zeder found it interesting that there "are no apparent morphological markers that can be used to discriminate domestic horses from wild horses (E. ferus) ...."

False Narrative — The myth that horses went extinct in North America during the Ice Age and were re-introduced  by the Conquistadors reflects the racism of the Eurocentric narrative.  Henderson (1991) documented Native American / First Nation oral history in this regard, which informs us that horses survived the Ice Age in North America and were present when the Europeans first "discovered" the New World.

Documents and Fossil-Finds — Corroborating the historicity of the First Americans' account, Downer (2014) has identified numerous fossil-finds whose carbon-dating supports the presence of horses in North America before the arrival of the Anglo-Euro invaders but well after the Ice Age.

What Happened to Them — The indigenous horses were exterminated by our government.  Reason?  To keep the Authentic Americans restricted to reservations in order to steal their land and stock it with non-native, invasive livestock, which now number in the millions.  McNamee (2013) has written about this shameful time in our history.  To read about a particularly-heinous equid extermination-event carried out by the US Army, see McNeel (2014).

Imported Non-Native Species — Chukar Partridges were imported to the United States from India, Pakistan, and Afghanistan by game departments, sportsmen's clubs, and interested individuals.  In Nevada alone, the Chukar population is estimated at more than 500,000.  No efforts are made to remove or eradicate them.  On the contrary, government agencies coordinate with private interests to improve resources that support them.

Horses Benefit the Environment — Unlike ruminants, horses have a post-gastric digestive system, which helps to reseed the range and to increase the humus-component of the soil via their droppings.  Wild horses thrive on marginal forage, the coarse dry stuff that cattle don't like.  In fact, an innovative, science-based solution has been proposed:  Deploy previously-captured wild horses to remote wilderness areas to graze down the excess dry forage that would otherwise fuel megafires.  The "Wild Horse Fire Brigade" offers a win-win-win benefit:  Prevent catastrophic fires, save billions of taxpayer dollars, and release wild horses back to freedom.

Wild Horses Graze Old Growth, Cattle Prefer New Growth — Horses are like lawn mowers.  They take off the top growth — the dry, unpalatable layer.  This grazing method enables plants to put down deeper roots, and it prevents weeds from maturing to produce seeds.  Grasses are encouraged by the horses' frequent "mowing."  Cattle, in contrast, prefer tender new growth.  Hanselka et al. (2002) found that cattle will return to patches previously grazed to get at new growth.

Equids Enhance Livestock Production — Research by Odadi and colleagues (2011) demonstrated that cattle gain 60% more weight when grazed alongside equids.  Further, observers have remarked that most wild horses removed from the range are in excellent condition.  Some people call them fat.

Overpopulation Is a False Flag — On the range, wild horses are few and far between.  Off the range, half of them are missing.  BLM claims there are around 82,000 on the range and 50,000 in off-range pastures (ORPs).  Both figures are fictitious.  Overpopulation is a fraud.

2% = High End of Normal Herd Growth — As reported by McCort (1984), the National Research Council (NRC) determined the average birth rate across wild-horse herds was 17.1%.  Gregg, LeBlanc, and Johnston (2014) found an average birth rate of just under 20%.  However, the birth rate turned out to be a temporary blip in the data.  The NRC found that 32% of foals perished before their first birthday, while Gregg et al. disclosed a 50% foal-mortality rate.  (Midpoint: 40%.)  The population-gain from surviving foals ranged from 10% to 11.6%.  Moreover, 10% to 12% of adult herd-members die off every year.  Therefore, at most, herd-growth barely approaches 2%.

Fraudulent Figures on the Range — BLM's persistent false and misleading representation of a 20% growth rate — 10 times the high-norm — is how the overpopulation myth started.  If it stopped there, the fraud would be bad enough.  However, BLM has repeatedly been caught reporting one-year increases far beyond what's biologically possible.

Octomares? — BLM claimed the Great Divide Basin herd (first on list above) grew from 199 horses to 670 horses in one year, an increase of 471 horses.  If so, then in order to overcome foal mortality (40%) and adult mortality (at least 10%), that would mean each mare gave birth to 8 foals.

Fraudulent Figures off the Range — A 5-year investigation by Wild Horse Freedom Federation revealed that BLM has been publishing false figures regarding the number of wild horses removed from the range and supposedly boarded in off-range pastures (ORPs).  The discrepancy approaches 50%.  BLM is paying, but where are the horses?  http://wildhorsefreedomfederation.org/white-paper/

Fraud Is a Crime — Falsification of government records constitutes fraud, which violates Title 18 USC 1001 of the Federal criminal code.

Arbitrary Management Level (AML) — The maximum number of wild horses that BLM declares the Western range can support (26,715) is a political construct.  Moreover, BLM manages the herds down to the minimum AML (16,310), which equates to a stocking-density of 1 wild horse per 1,936 acres or 3 square miles!  Many herds are held to an even greater dispersion:

Contrast with Livestock-Density — For the typical grazing season, BLM allows a stocking-density of 8 cows plus 8 calves (or 40 ewes plus 80 lambs) per 1 square mile.

What to Do — BLM must be stopped from committing fraud.  Wild horses are a resource of great benefit to the range.  Their importance must be recognized, and policy should reflect that.